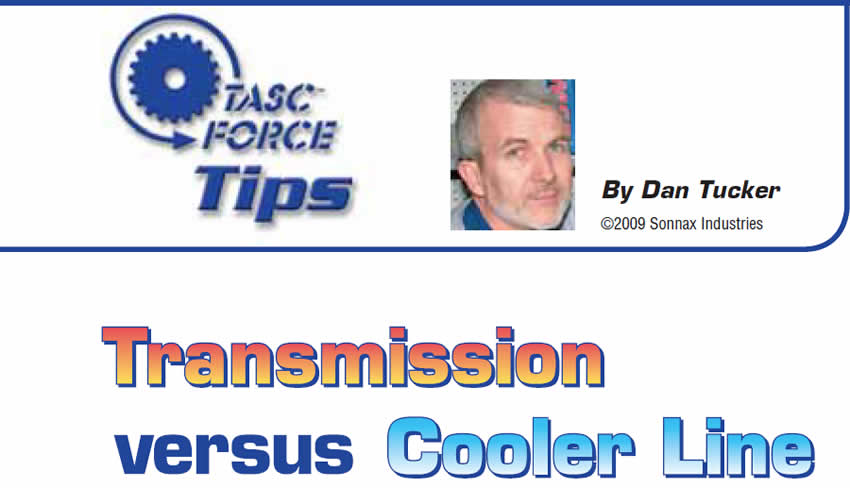 Now isn’t this an odd title for an article? Is the title insinuating that the transmission and the cooler line are competing with one another? I thought transmissions and cooler lines worked together in harmony. Well, I know at our shop, we have certain cooler lines that have drawn special attention in the past couple of years. We have been ‘clipped’ with some unexpected comebacks.

Now isn’t this an odd title for an article? Is the title insinuating that the transmission and the cooler line are competing with one another? I thought transmissions and cooler lines worked together in harmony. Well, I know at our shop, we have certain cooler lines that have drawn special attention in the past couple of years. We have been ‘clipped’ with some unexpected comebacks.

Here is a real-life experience from our shop that started about three years ago. A 2000 Chevrolet pickup came in with no reverse, no second and no fourth. Although I felt for the customer, I had to say this was a “sweet” complaint and we were eager to fix this “gravy” job.

The vehicle had better than 130,000 miles on it, so the customer chose an overhaul. We took out the transmission, did the standard overhaul, flushed the cooler, and back in the vehicle it went. Before we let the truck down it got a double check to make sure everything looked as if we had never worked on it. We filled it with fluid, test-drove it a couple of times and it was ready to deliver to the customer.

The customer picked up the vehicle and it worked great – for about a year. Then we got that dreaded phone call that goes something like this: “You know the truck you just overhauled for me? Well, it just started slipping and quit all at once.” We sent a wrecker after it. Once it got to the shop we raised the hood and found that the cooler line at the radiator had been on the move. That’s right; the top cooler line had decided to move rearward about 6 inches. The cause: The tiny metal cooler-line clip (Figure 1) gets worn or breaks (Figure 2) and allows the cooler line to pop out of the radiator.

We breathed a sigh of relief, convinced we were looking at only repairing the cooler-line problem, and down the road the transmission would go. I wish this were the case, but most of the time with a 4L60-E, when it comes to cooler line vs. transmission, the cooler line kills the transmission – specifically the 3-4 clutches. What seems to happen is if the line pops out and the customer is traveling faster than 55 mph, before they notice the massive fluid leak they feel the transmission falling out of gear. It takes only a few revs of the engine to verify that the transmission is slipping, and in the process the 3-4 clutch plates are wiped out.

In this particular case, we replaced the broken cooler-line clip and on the test drive the truck had no third or fourth. This is not good. If we look at this from the customer’s point of view, they figure it is our fault because we just rebuilt the transmission and they paid us a lot of money. If you look at it from our point of view, we worked on the transmission and didn’t touch the cooler lines at the radiator.

Now look at what has happened. The transmission-vs.-cooler-line war has turned into the worst possible situation. If the shop doesn’t warrant the transmission, it will be “shop vs. customer.” Because this was the first time we had run into this we smiled, explained the situation to the customer and made the repair for free. Of course, this leaves the customer happy and the shop in the red.

During the repair, we installed two new clips at the radiator top and bottom. We also took a plastic tie and secured the lines at the radiator to stop some of the sloppy movement that we believe is responsible for the wear on the tiny clips.

After this customer was gone, it was not a week later until we had a cooler line pop out of a different vehicle. This time it was the bottom line on a 2001 Chevrolet truck with a little more than 100,000 miles on it. That job made us change our repair process. From that day on, we made it a part of every overhaul to install new clips at the radiator and secure the lines. Over the next year, more than 10 units we had rebuilt before we started replacing the clips lost lines at the radiator. More than 75% of the time, the line popping out equaled burnt 3-4 clutches. On a few, the forward clutches were burnt, but usually it was the 3-4. Of course, all the clutch damage was from the sudden loss of fluid.

In 2008 we had only one cooler line pop out, and it was determined that we had installed a new clip on the bottom line but failed to replace the one on the top.

I have written this article to warn other poor old transmission shops like ours that there is a spider’s web spun out there, waiting to catch you. While we are flying around minding our own business doing the best job we can fixing transmissions, the cooler-line booby-trap is lurking, waiting to catch us in its web. I don’t think there will be any bailout money to help us. The only way I see to avoid this trap is to fix the problem before it becomes a problem. The vehicles we have seen with this concern are the 1999-2006 Chevrolet and GMC full-size pickups. In 2007, GM added brackets on the radiator shroud that secure the cooler lines. We believe this will reduce or eliminate the problem. As stated earlier, we believe the loose-floppy line is what causes the clip to wear so quickly.

I know some of you have not run into this problem yet, so you may be reluctant to start replacing the clips on these vehicles. I challenge you to start taking the clips off at the radiator and inspecting them, especially on higher-mileage vehicles. These tiny clips contact the cooler line in only three small areas (Figure 3). Once the clip is worn through in one of the three contact areas, it breaks and out goes the line. We have seen them badly worn at 65,000 miles (Figure 4).

Why take a chance? Replace them and charge the customer for it. What is that old saying? “While the customer has his wallet out, make sure you get the money you deserve to fix their vehicle, because once the wallet goes into their pocket, it is nearly impossible to get them to pull it back out later.”