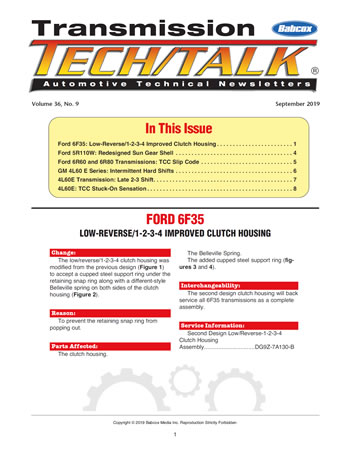 The low/reverse/1-2-3-4 clutch housing was modified from the previous design (Figure 1) to accept a cupped steel support ring under the retaining snap ring along with a different style Belleville spring on both sides of the clutch housing (Figure 2).

To prevent the retaining snap ring from popping out.

The second design clutch housing will back service all 6F35 transmissions as a complete assembly.

The sun gear Shell has been updated to contain a waved washer between the shell and the sun gear as seen in Figure 5.

The previous design is shown in Figure 6.

To address a noise concern.

The redesigned Sun Gear Shell will back service all 5R110W transmissions to the 2005 model year.

The 6R series transmission began with the 2005 Navigator followed by the 2006 Explorer and Mountaineer (4.6L V-8). The Expedition received it in 2007, 2008 for the F150 and 2010 for Mustang. These vehicles may come in with the transmission control indicator lamp (TCIL) illuminated along with a TCC slip code P0741 stored in memory. The malfunctioning indicator lamp (MIL) may or may not be illuminated.

Clear the code to allow for the computer to apply the clutch. Approximately 55-70 psi of pressure should be observed and go to 0 psi when full converter clutch apply is commanded. If this is observed yet P0741 stores, the converter clutch lining is defective. If engine RPM and input/turbine shaft RPM are observed during this test, when TCC is commanded on, engine RPM will remain higher than the ISS/TSS RPM. When TCC operates correctly these two values would read the same.

The torque converter will need to be replaced. If the above test revealed pressures below 55 psi this could indicate that valve body bore wear may also need to be addressed.

Note: When code P0741 sets, the computer will no longer apply the converter clutch. If the driver ignores the TCIL light, it is possible that the transmission may be overheated due to extended highway driving with-out converter clutch applied. If this is discovered, a more thorough repair may be needed.

A late model Chevrolet or GMC truck may have complaints of intermittent harsh shifts and engine lugging due to the converter clutch applying on top of the 1-2 shift. Diagnostic trouble codes P0961 for pressure control solenoid “A” circuit range/performance and P2769 for torque converter clutch circuit low are set, however the vehicle did not go to limp mode and made first gear starts and shifted automatically.

The wiring harness that is routed from the transmission case connector over the top of the transmission towards the rear of the engine on the driver’s side has been damaged by contact with a body seam, refer to Figure 8.

The body seam edge has cut through the harness conduit as well as the pressure control and TCC solenoid wires resulting in the above complaints.

Repair the affected wiring and reroute the harness out of harms way.

A 2003 Chevy Blazer with a 4.3L V6 using a 4L60-E transmission has what felt like a late 2-3 shift then slipping into 4th gear during light to medium throttle. This is typically the type of sensation experienced when the 3-4 clutches are burnt. The fluid level and condition does not indicate burnt clutches and code P0758 is stored for a 2-3 shift solenoid circuit error. When the code is erased and the vehicle is road tested again, the transmission continues to malfunction yet the code does not return. Nothing was discovered when the solenoid and its related wiring and connec-tors were checked for resistance, corrosion and shorts.

If driven long enough, code P0758 would return indicating a circuit error for the solenoid. Since the circuit was checked during cold and operating temperatures with no circuit issues discovered, it was decided to replace the VCM. Once replaced, all shifts were restored to normal operations during light, medium and heavy throttle conditions.

A 2008 Chevy 1500 using a 5.3L 4L60-E drivetrain comes in with a customer complaint of a shudder on a downshift. A P0123 TP Sensor 1 signal short to volt-age code stored in history was obtained during prelimi-nary diagnostics. The vehicle was then road tested. During a low coast below 20 mph the vehicle would produce a TCC stuck on sensation accompanied by a slight drop in RPM and a droning type noise. When the accelerator was depressed slightly, engine rpm would rise slightly as if the converter clutch was not applied. The TCC applied sensation would go away at times on a 3-2 or a 2-1 downshift. If the vehicle was held at a steady speed of 20 mph, the TCC stuck on sensation was very noticeable. The TPS code was erased but would return after being driven but only in history.

With certain maneuvers such as getting in and out of the throttle during turns, a clunk was both felt and heard. Most of these symptoms were not present when the selector lever was moved to the D3 position. Monitoring TCC command and slip in a scan tool while in the D4 position, data indicated that the converter clutch was not being applied. A throttle hesitation dur-ing aggressive accelerations from below 15 mph was also observed.

It was determined that the clunk noise which was both felt and heard was due to a completely broken left motor mount (figures 10 and 11 – the right one was not broken but needed to be replaced also). The hesitation during aggressive throttle openings from a low coast as well as the sensation of the converter clutch being applied was blamed on TPS code P0123.

Before the P0123 was addressed, new motor mounts were installed. Surprisingly, the sensation of the converter clutch being applied was no longer present. The hesitation during aggressive throttle openings from a low coast remained and was not resolved even after replacing the APP sensor, which eliminated the P0123 code.

Upon further investigation, it was discovered that the throttle hesitation is purposely programed. According to GM, the throttle blade is programmed to open slowly for up to 0.7 seconds so as to help mini-mize driveline lash and clunking. This information was obtained by GM paper PIP4112P entitled “Normal Characteristic – Sag Or Hesitation On Acceleration” dated Jun 26, 2014.