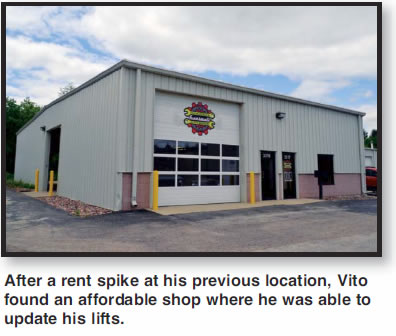 Faced with a serious rent spike where Transmatic Transmission Specialist resided since 1978, Vito Palminteri seized the opportunity earlier this year to upgrade his lifts as he moved to a newer, more affordable facility.

Faced with a serious rent spike where Transmatic Transmission Specialist resided since 1978, Vito Palminteri seized the opportunity earlier this year to upgrade his lifts as he moved to a newer, more affordable facility.

The three lifts are modern equipment, replacing four old in-ground lifts that were leaking. For Vito and his sole employee, technician James Pezanoski, the fourth lift at the previous shop was more of a luxury, Vito said.

“We have a new, updated facility, a much nicer, cleaner place, and it’s much more presentable,” Vito said. “We set up everything nice and neat. That’s how we do things here.”

After a short transition, customers migrated to the new location and business has returned to usual. “We seemed to have picked up quite a bit, and things are rolling along smoothly,” he said.

During high school, Vito worked at Jiffy Lube and other oil-change places around town. After he graduated in 2001, he started working at his uncle’s transmission shop and learning the industry from the ground up.

“Some of my first tools were a shovel and a broom, and from that point,” he said. “I just took to it, and I put everything I had into learning the industry and putting my career right in front of me.”

Meanwhile, he heard advice from his elders about how to conduct his career, and one man’s guidance remained in Vito’s mind.

“I was talking with someone who owned a motor-repair facility, like starter motors, alternator rebuilding shop. It was when I was just about 18 years old, working for my uncle. I was speaking with this man. … He said the best thing you can do is learn your trade, master it, and go into business for yourself. And through all my years, it stuck in my head, and I applied it to my own life.”

In 2010, the owner of Transmatics was ready to retire after more than three decades. When he circulated some postcards advertising that he was selling the business, Vito took an interest. “Someone else was looking to purchase the business. I came up with the cash quicker and made the deal happen,” Vito said.

The hard work paid off, and the sage advice carried him to his goal of owning a shop.

The year 2010, in the depths of the Great Recession, would seem to be a difficult time for a neophyte business owner. It was tough, but not necessarily due to economics, Vito said.

“My biggest obstacle was going from technician to owner. There’s a lot to learn from stepping from one side to the other. There were a lot of things that I had to grasp that go with becoming an owner. You gotta learn taxes, paychecks, how to negotiate contracts, how to basically watch yourself because everybody’s out to get you! (laughs) … Unfortunately, there was a big learning curve that I had to take on, which was the hardest, the most challenging part of purchasing a business. Everything else worked well.”

Vito has been training James in transmission and general repair for three years, teaching James the trade just the way Vito learned. The business pulls customers from a 15-mile radius. For a small operation in Crystal Lake, a burgeoning city in the outer metropolitan area of Chicago, it’s possible to get swamped. However, Vito sticks with the two-person operation.

“There’s points where we could use a third person. In this industry, everything comes at once, and it’s feast or famine,” he said. “There will times when this week, we need a third guy, and then next week we’ll need only one person. Basically, what we try to do is hustle and get it done. We’ll work through it, and if we have to put in extra hours on Saturday or after work, we gotta do what we gotta do.”

Vito cultivates a polite manner for greeting people in person and on the phone. “Our customers are everything to us. Without them, we’re nothing.”

The work done in the shop is 80% transmission, 20% general repair. Within the transmission segment, rebuilding and R&R are divided evenly, and they complete 3-5 transmission projects per week. Transmatic extends a 12-month/12,000-mile warranty.

The business stands out for its performance work. “I build quarter-mile racing transmissions for drag racing. We’re always working on hot rods. That tends to bring in some people,” he said. “Pretty much anything anybody needs we will do, whether it’s building a motor for them, building a trans, or as simple as changing spark plugs, oil or maintaining their old vehicle,” he said.

Vito has observed changes in the industry that have impinged on the operation of small shops. As transmissions become more complex, costs go up.

“We have transmissions where the parts costs are getting quite high, with six speeds, nine speeds. It’s starting to get to the point where the cost of the transmission is outweighing the value of the car,” he said. It’s tough to tell a customer that a repair will cost $4,000, let alone sell the repair to the customer. “They start to look in another direction, more toward getting a new car – that’s a down payment on a new car.”

Dealerships also have an impact on small shops.

On a uplifting note, Vito remains encouraged about his work when he sees the results for customers.

“Achieving a goal of fixing a vehicle: that’s the reward for me,” he said. “Basically it’s taking somebody’s problem and turning it around and fixing it and returning it back to them in a timely manner. What makes me happy about our day-to-day operation is exactly that.”