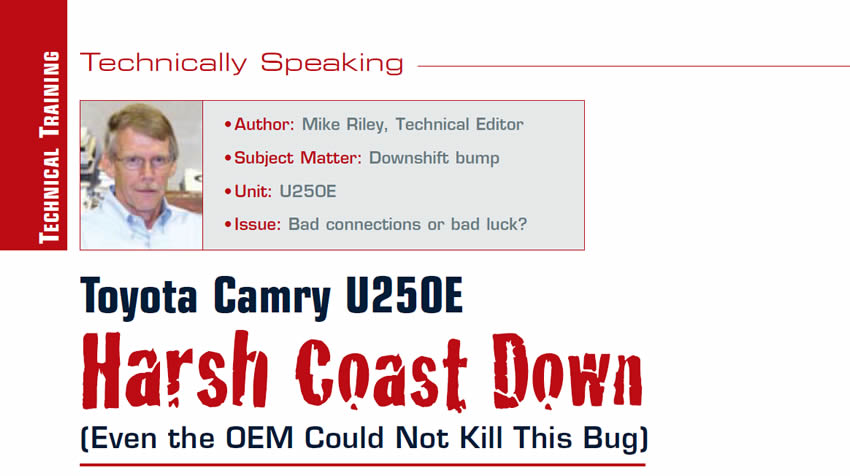 Although the transmission upshifted well and had a good lockup apply, at times when the vehicle came to a stop a bump would occur that felt like a rear end collision. The speed at which it came to a stop would dictate whether the transmission would downshift smooth or harsh. Normally, when coming to a regular stop, everything functioned well; however, coming to a quick stop was a different matter.

(Even the OEM Could Not Kill This Bug)

When Fred, an unsuspecting car owner, purchased his brand new 2005 Camry, little did he know of the unending issues yet to come. The vehicle came equipped with a 3.0L engine and a U250E five-speed automatic transmission. At first, everything went well and the transmission worked as intended, but after approximately one year and 8,000 miles of driving, a glitch started to appear.

Although the transmission upshifted well and had a good lockup apply, at times when the vehicle came to a stop a bump would occur that felt like a rear end collision. The speed at which it came to a stop would dictate whether the transmission would downshift smooth or harsh. Normally, when coming to a regular stop, everything functioned well; however, coming to a quick stop was a different matter.

This time the dealer decided to be more aggressive and chose to start replacing stuff. The U250E is a fully computer-controlled transmission with all the electrical do-dads. There are seven individual solenoids that control every aspect of the transmission (Figure 1). Although the upshifts felt fine, the dealer decided to replace the SLT solenoid, which is the line pressure control solenoid. In addition, the dealer also did a reflash of the computer in the event that something got out of whack. Again, the vehicle was given back to Fred in the hope that things were handled. All was good, for a while at least.

In less than a year, after the SLT solenoid was replaced, the downshift issue reared its ugly head and again back to the dealer the vehicle went. Just as before, the dealer went through the normal routine of driving the vehicle and checking for codes, although the check-engine light was never on. Assuming that the SLT solenoid went bad, it was replaced for a second time and the computer shift adapts were reset along with the regular reprogramming, reflash, relearn, etc. Back on the road the vehicle went. At this point patience was wearing thin.

One might ask that normally if a SLT solenoid fails, other issues would surface, such as hard upshifts or lockup as well as setting certain trouble codes. This, however, was never the case with the Camry. The SLT solenoid is a linear design, similar to others on the valve body (Figure 2). The other linear solenoids in the U250E are the SL1, SL2 and SL3. Use caution during any valve-body repair and mark all solenoids before removal, because they can be installed incorrectly. It is unclear if the dealer ever chose to test the solenoid before replacing or not, but it was replaced regardless.

This back-and-forth tug of war between the car owner and the dealership continued for some time, to the point that Fred finally went to a second Toyota dealer to try to resolve the issue. The “MO” at the second dealer was pretty much same as the first. To further complicate matters, there were stretches of time that the vehicle was not driven much. In the end, as with all new vehicles, the OEM powertrain warranty ran out, which unfortunately left Fred to deal with it. The question now is, will he live with the problem or get it fixed elsewhere?

By the middle of 2012, the vehicle had 48,000 miles on it and the car owner was pretty much resigned to living with the problem, but decided to give it another shot and showed up at a local transmission shop. The technician listened to Fred’s tale of woe and went through the normal procedures to try to determine the cause of the problem. As usual, there was no check-engine light or DTCs and the pan was dropped to look for damage. Since the pan had been removed several times in the past, it was clean as a whistle and the fluid looked brand new. Faced with the history, it was decided to replace the valve body with a reman and another new SLT solenoid. Once reassembled, the computer was reflashed and taken for a road test. Just as before, everything worked great.

Over the next couple of years, the transmission would give an occasional bump that Fred just chalked up to bad ozone and conveniently ignored, but in the beginning of 2015 things regressed. Faced with almost constant downshift bumps, the vehicle was taken to yet another transmission shop. This thing was not getting the best of Fred.

As with countless times in the past, the new tech did the drill of listening and driving the vehicle, but decided more wrenching was out of the question. The technician literally poked and prodded every wire and connector, grounds and feeds that had anything to do with the transmission. Without any relearn or reprogram, the vehicle was driven and worked great. As an added safeguard, one more fresh download was performed and the vehicle was returned to Fred, hopefully for the last time. So far, so good.

Whether the Camry suffered from bad connections or bad luck remains to be seen, however goes to show it doesn’t always require new stuff. Now, if Fred would only sell this thing.