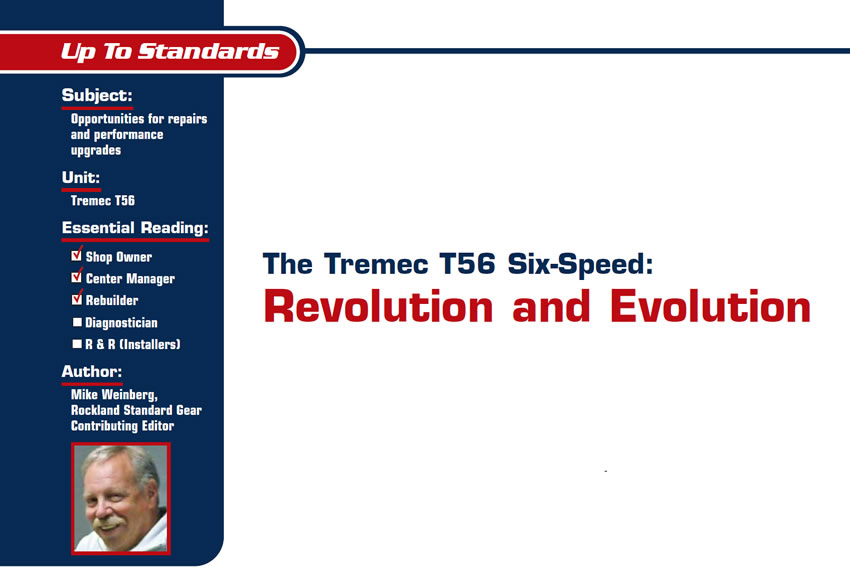 Tremec, also known as Transmission Technology Corp., is a major producer of manual-transmission and drivetrain components. Tremec operates a world-class plant that is producing transmission products for many of the world’s major auto and truck manufacturers.

The T56 has been around for more than a decade. It originally was designed by BorgWarner as a six-speed evolution of the T5, with greater torque and horsepower capacity and 5th and 6th gears being overdriven. BorgWarner subsequently sold its manual-transmission division to Tremec in Mexico.

Tremec, also known as Transmission Technology Corp., is a major producer of manual-transmission and drivetrain components. Tremec operates a world-class plant that is producing transmission products for many of the world’s major auto and truck manufacturers.

Tremec has taken the T56 to new levels of production and development, and this unit is now the six-speed of choice for many of the popular sports and performance vehicles on the road today. As such, this unit offers opportunities for repairs in your shop and for performance upgrades that you can offer your customers to add to your profits.

The T56 was used first in GM’s F-body Camaro and Firebird models behind the LT1 engine and later coupled to the LS1 and LS6 engines. GM later had Tremec develop the T56 for use in the C5 generation of Corvettes. This unit was mounted behind the driver and mated directly to the differential to give the ’Vette better balance and weight distribution. It is the transmission used in the new generation of C6 Corvettes.

The General also used the T56 in the new Cadillac CTS-V performance model, which uses a Corvette Z06 engine and drivetrain, and in the new Pontiac GTO. Chrysler uses the T56 behind its Dodge Viper V-10 and in the new sport pickup truck that uses the same engine. Ford uses the T56 in the Cobra R Mustangs and the later-model Mustangs, and Aston Martin uses a version of the T56 equipped with an extension housing that contains a number of shift solenoids to enable “paddle-shift” capability from the steering wheel.

This transmission is available in several ratios:

Equipped with an aluminum case, extension housing and bellhousing, the T56 uses advanced synchronizer technology and a single-rail shift system. The synchronizers are double-lined rings using steel inner and outer cones on 1st and 2nd gears. The linings on the synchro rings were paper clutch material on early production units, and Tremec has upgraded that to carbon-fiber linings. The shift forks are aluminum for 1-2 and 3-4, and reverse is synchronized for smoother engagement. This unit is specified to use synthetic ATF for lubricant.

There are two solenoids on the transmission. The reverse-lockout solenoid is by the shift tower. The shift pattern locates reverse to the right of the 5th-gear slot on the shifter.

Reverse has a 45-lb. spring load on the gate to keep the driver from catching reverse when making a shift to 5th. During a shift to reverse, the solenoid will activate, overcoming the spring tension and allowing reverse to be reached with fingertip effort.

The other solenoid, on the transmission main case, is the “skip-shift” feature. This is an attempt to meet stricter environmental and pollution regulations. Automatic transmissions shift at open-throttle position; manual gearboxes always shift at closed throttle. Since closed-throttle positions generate more pollution, the skip-shift solenoid was added to try to control throttle opening and shift position. If you drive the vehicle at normal rates of acceleration or beyond, the skip-shift solenoid will not function. At very light throttle, the computer will activate the solenoid in 1st gear, forcing the driver to shift from 1st to 4th, which shuts down the fuel in the engine-management system to prevent an over-rich condition. The only people who will see the skip-shift activate have to be driving like the proverbial “old lady.”

On the C5 generation of Corvettes, Tremec developed triple-ring synchronizer technology. This consists of an inner lined steel cone that rides on the cone of the speed gear, a double-lined synchro ring and an outer steel cone. This effectively triples the friction capacity of the synchronizer and makes for very smooth shifts at high engine speeds. This was necessary in the C5 and C6 Corvettes because of the high driveline inertia generated by connecting the differential directly to the transmission. Without the conventional driveshaft and mounts to absorb some of the torque, synchronizer capacity had to be raised to overcome the driveline inertia prevalent during downshifts.

New for the C6 Corvettes is an internal oil pump that is driven by the front of the countershaft. A positive-displacement pump provides pressurized feed to a transmission cooler and then back to the unit, similar to cooling for automatic transmissions.

The T56 is an excellent transmission for the performance cars it was designed for, but it is easily adaptable for a variety of other performance uses. With two overdrive gears it provides excellent fuel economy, which at current gas prices is a big plus. Also, this unit is adaptable to a wide variety cars for which it was never intended. The double overdrive gives the hot-rodder with a radically cammed engine the ability to cruise without the valves climbing out onto the hood. There are any number of kit cars, hot rods and older muscle cars that the T56 can be used in to replace the four-speeds and T5s that they were built with.

The performance aftermarket in this country generates $67 billion a year. As you fight your daily battle for repair business in your market, it might be wise to study this market and see where you can find yourself some extra sales. Tremec has designed two aftermarket units that will replace T5s and four-speed Saginaws, Muncies and T10s with a minimum of engineering work. If you have a customer with a late-model Mustang with a 3650 trans, the T56 can be a direct replacement offering a six-speed and better performance. You can up your customer’s performance and fuel economy at the same time, all the while dealing with people who are eager to spend money on their toys.

The GM T56 units are designed with 27-spline output shafts that match the 700-R4 and 4L60-E. We routinely retrofit a 30-spline Viper output shaft into the F-body cars for weekend warriors who want to be able to drag-race their street cars. The Viper shaft is a much beefier unit capable of much greater torque and abuse than the stock shaft.

For the C5 Corvettes there is available a 300 moly output shaft that is capable of withstanding abuse and racing and is a must for Corvettes that have had their horsepower increased with turbos, superchargers or nitrous. You can furnish ratio changes, upgraded steel 3-4 forks, billet-steel solid synchro keys and even a gear set capable of handling 1,000 horsepower engines. Performance sells, and you can get a piece of this action without a huge investment. Adding niche markets to your customers will generate more of the business you want to have.

Advertisement
In this article:six-speed manual transmission, Tremec T56, Up To Standards