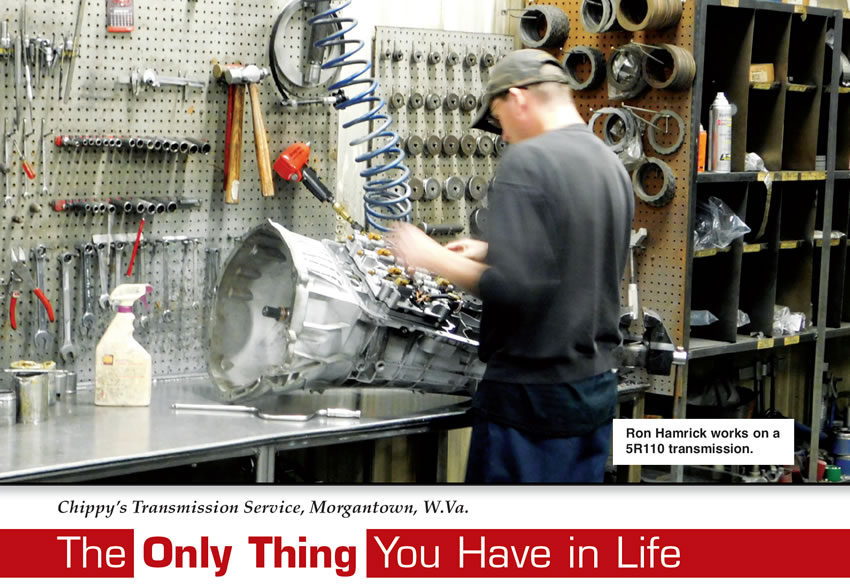 For the rest of this article, Chippy refers to Chippy the younger.

The founder, a resourceful mechanical and business practitioner, opened a shop in 1956 in a 30-by-40-foot building, to which he added over the years, expanding to more than three times the original area. He designed a torque converter for vehicles in coal mines – an accomplishment that allowed him to retire in his mid-50s.

Beyond his ingenuity and multitude of skills, he taught Chippy moral values, integrity and the importance of reputation.

Chippy started work with his father in 1974, and the business moved into Chippy’s hands in 1984. He moved the shop in 1997 to a bigger building where the business remains.

“My customers are so important to me, and I have so much respect for them. Two things I always tell my guys: If they didn’t need the car, they wouldn’t bring it here, so we have to get it done. And the other thing is, they could always go somewhere else.”

Chippy won’t promise to finish on a certain date, but he’ll do his best, and he’ll keep customers apprised of any delays, such as in parts orders.
“I don’t wait till the last day to make that phone call – or let the customer call and ask, ‘Is my car done?’ That keeps people from being mad at you.”

With this approach, Chippy has built a customer base that reaches to a radius of 80 miles, covering northeast West Virginia, southwest Pennsylvania and northern Virginia.

“Reputation. That’s why she came from Ellenboro. I’ve had people call me from New York. Two people called me from Florida because we had done work for somebody in their family who lived in West Virginia – not to bring their cars here, but telling me their symptoms and wanting to know if I thought it really needed a transmission.”

Almost all of the shop’s work is in rebuilding, with about 10% R&R. He’ll make sure that, when he’s done with a job, the unit will last for a long time, he said.

“I try to build them to what the customer wants. I guess you call it custom building.”

The shop turns out 10-15 transmission projects per week, working with two lifts with bays. The shop has three builders, two R&R technicians and a service writer.

Chippy’s Transmission serves several fleets, and the crew sees as many as a dozen RVs whose transmissions were burned on the mountainous vacation routes. They also handle a lot of off-road vehicles. “As far as off road, just about everybody who has 4-wheel drive in West Virginia goes off road,” he said.

When Chippy planned the building, he installed two lifts, and he asked the technicians how they liked them.

“None of them wanted to use them. You’re standing with your head twisted back and the back of your head is hitting your shoulder blade for eight hours,” Chippy said. “All of them said they wanted to lay on their back all day. It was their call.

“I know they could do faster work under the lift than they’re doing on the ground, laying on creepers, but these guys have to be happy to do a good job.”

In addition to transmission work, the shop built torque converters for 12 years.

“I enjoyed doing it, but my downfall was, when I bought the equipment from ATI, I made up my mind that I would only build converters for Chippy’s Transmission,” he said. “We were wholesaling transmissions back then, and we were doing 40 a week, so that justified building converters. Well then when GM and Ford got their manufacturing programs up, we lost that work, then it slowed down to where we weren’t doing as many converters.” They ended up selling the equipment.

The business acquired an Axyline Dyno initially for the wholesale and carryout units — they had to be tested before they left the shop. Now they use the dynamometer for research.

“We’ll run transmissions on it, and then we’ll take them off. We’ll make changes and put them back on. See what difference we could make with them,” Chippy said. However, the march of computer controls, such as the TEHCM, has sidelined the dyno for many vehicles.

• The factories have made vehicles to last forever.
• Motorists reject rebuilding in favor of cheaper replacement.
• Making repairs is expensive.

“To tell you the truth, in my mind, we’re all dinosaurs,” he said.
“You can’t buy anything and rebuild it yourself. The factories got lucky to the point where they’re making transmissions that are lasting longer, and they have the price of the parts up so high.”

Take the example of a domestic manufacturer’s transfer case that needed a new bearing.

“I called to get a bearing, but they said they couldn’t get it. You have to buy the whole unit.” The cost difference between bearing and unit: $1,442.

Chippy has no interest in making changes in his business model; however, he understands that changes will be needed in the near future. His son has been working in a job that calls for a lot of travel, but now he has children, and he’ll likely prefer a career that keeps him close to home.
“He’ll have to go general auto. I’m content with what I’m doing, and I don’t care to do general auto — not that we can’t. When he steps in, he’ll do that,” Chippy said.

“‘Young minds bring in new ideas.’ That’s what I told my son. ‘Whenever you want to come back and do this, that’s fine.’”

The Only Thing You Have in Life