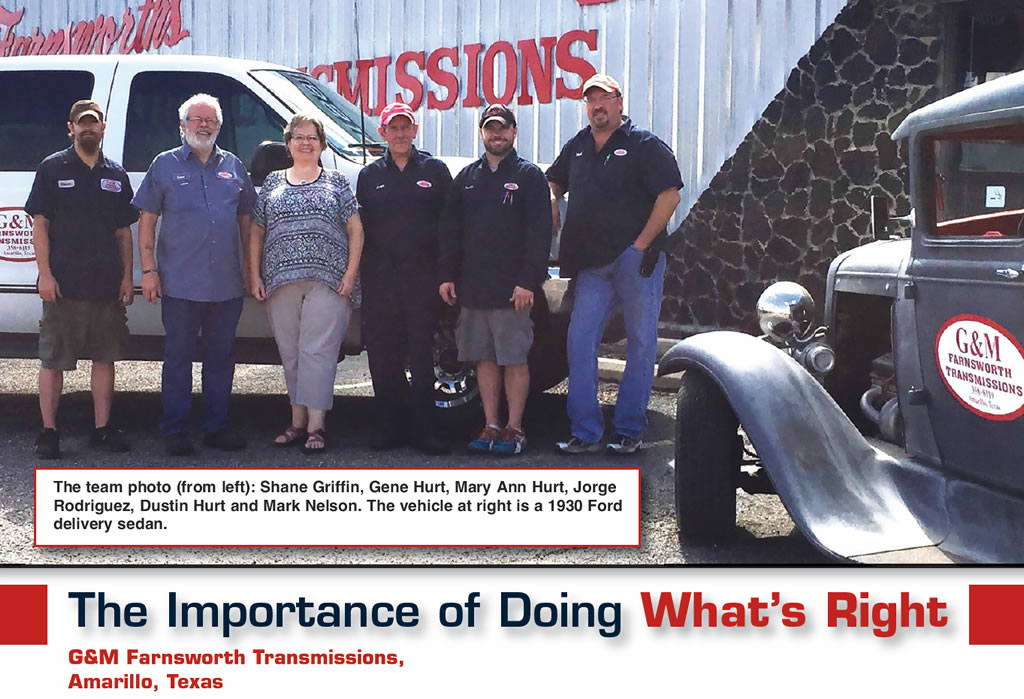 At the website of G&M Farnsworth Transmissions you will find an interactive gear shifter, five speeds plus reverse. You enter the site by clicking on first gear, which directs you to a 17-point ethics statement by which the Amarillo, Texas, shop adheres. The statement starts like this:

Subsequent gears lead to assorted bits of useful information, but the emphasis on ethics makes a strong impression, on which shop owner Gene Hurt elaborates in many ways.

“I’m old school. I’m 64 years old, and I don’t know anything else. I got into this business because I was tired of people taking advantage of people,” he said.

As a young man, Gene worked in various automotive shops, then he went into sales for earth-moving and tire companies. Tiring of driving 100,000-plus miles a year, he decided to get back into a shop.

In 2004, he looked into G&M Transmission, a shop with a 25-year track record. While Gene and his wife, Mary Ann, deliberated, they noted the initials of the company corresponded to theirs. “We figured God gave us a sign to buy G&M, so that’s what we did,” Gene said.

Running a shop required both spouses, and Mary Ann stepped in to answer the phone and keep the books.

Four years later, the Hurts bought Farnsworth Transmissions after the death of the owner. The Hurts, who were leasing the property at G&M, moved the business to the newly purchased shop, two miles closer to the center of the city, with more space and the opportunity to own the property. The consolidated business became G&M Farnsworth Transmissions.

Six years ago, the business became sufficiently viable to employ their son, Dustin, who had been working in the construction field. They employ three others: Mark Nelson, previous owner of another shop, builder and technician; Shane Griffin, R&R and general repair technician; and Jorge Rodriguez, who has expertise across the transmission field, including builder and previous shop ownership. Jorge is celebrating his 75th birthday in November.

Dustin has been learning the field since he was little. “Dad handed me a wrench and said, ‘Here you go, fix it.’ He’d supervise, but he made me do it. That way I learned.”

While working in the shop, Dustin has been learning the business and taking on multiple roles, including service manager, shop manager and diagnostician.

“I’m here for the customers and for my guys,” Dustin said. “If we’re not talking to a customer, we’re not making money. I want my guys to have job security.” His goal is to take over ownership.

Gene said his mother raised him to do what’s right and treat people the way he would want to be treated. The Golden Rule turns out to be good for business, he said. “We get more out of people coming back than you do by running them off,” Gene said. “We try to smile before we answer the phone. It’s not easy some days, but that’s the kind of stuff we try to do.”
Mary Ann has learned how the business cultivates satisfied customers.

“The biggest response I get is how Gene and Dustin spend the time with them on the phone and explain and try to help figure out what their car is doing. They appreciate the time,” she said. “Ninety percent of people who come in here say, ‘I came to your shop because you took time on the phone with me.’”

They more or less sell the job over the phone, Gene said. They give price ranges, not exact prices. “But we try to get them in the store.” The Hurts offer free diagnostics, and they encourage customers to leave a vehicle overnight so it can be tested both hot and cold.

“Back at the shop, we do a little show and tell. Show people the parts, what might be causing it,” Gene said, noting that the shop has two cutaway transmissions to help customers understand how they work.

“We bring them to the build room, let them see our guys with the transmission scattered on the bench, and they say, ‘Oh my gosh, there’s that many parts?’ It makes an impression with them by doing that stuff. We spend the time with our customers, whether we have it or not, we find a way to do it.’”

After these steps, they leave the decision to the customer, Dustin said. “We’re the type of company that doesn’t necessarily have to press them right then. We’re not a pressing shop. We give them the option. If they decide to do it, great. If they don’t, it’s their money, not ours.”

Mary Ann observed that the best customer relations happen in a certain situation that leads to no sale. When another business refers a customer for transmission repair, sometimes the diagnosis is not a transmission matter but a small problem fixed inexpensively.

“The customers are so appreciative that we didn’t sell them a transmission when they didn’t need one,” she said. “So we’ve got them life-long then, and they tell their friends, ‘You should go to G&M because they’re going to be truthful with you.’”

G&M Farnsworth completes roughly three to five transmission projects per week, along with other drivetrain work. Transmission repair breaks down as 90% rebuilding, 10% reman.

The shop has branched out into general repair, which has become 25-30% of revenues. Fleet accounts, which represent about 40% of the shop’s business, include general- and road-construction contractors.

The shop has six service bays and as many lifts to service a wide range of vehicles, from small cars to 1-ton to 4.5-ton trucks. G&M Farnsworth also works on older cars and hot rods.

One vehicle make they typically don’t service: Volkswagen. “You have to have too much specialty stuff, and we don’t see them often enough to justify them,” Dustin said.

Looking ahead to the change of ownership, Dustin suggested that his father may not want to retire all the way. In that case, the business would have three people with shop-ownership experience, including Jorge.

“It’s a good thing we like each other!” Mary Ann said.

“Working as a family is not always the easiest, I can tell you that,” Dustin said, amid laughter all around.

“Working as a family is tough, but it’s also rewarding,” Gene said. “It’s me, old school, against some of the new school. There’s no head-butting and stuff like that. We work through it.

The Importance of Doing What’s Right