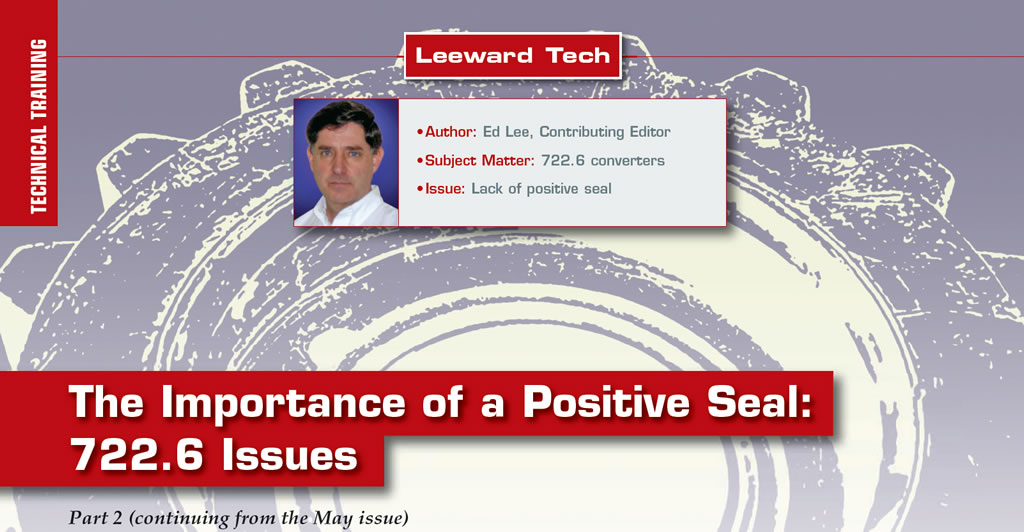 There are at least two major issues that are caused by the lack of a positive seal in 722.6 converters. One issue is the shutter on TCC apply and the other is insufficient or no cooler flow. These seemingly unrelated complaints share a common cause, but the cause-and-effect relationships are quite different.

Part 2 of at least two parts

There are at least two major issues that are caused by the lack of a positive seal in 722.6 converters. One issue is the shutter on TCC apply and the other is insufficient or no cooler flow. These seemingly unrelated complaints share a common cause, but the cause-and-effect relationships are quite different.

The TCC apply shutter happens when the clamping force required to hold the clutch is less than adequate. This is caused by a leak between the input/turbine shaft and the aluminum sleeve in the cover of the converter. The reason for the leak is the lack of a positive seal. In the TCC apply mode, TCC apply oil travels down the input shaft, exits the shaft into the cavity in the aluminum sleeve between the seal and the interference fit (figures 1 and 2).

From this cavity the oil travels through the three 0.160” holes in the sleeve and ends up under the TCC apply piston, moving it to apply the clutches (Figure 3).

A positive seal can be added to the aluminum sleeve by machining a cavity in the sleeve (Figure 4).

There are two Mitsubishi seals that will work for this application (part numbers MT-O-5V/TO25-5 and MT-O-6V) but the MT-O-6V works best because it is a tighter fit on the shaft.

When you are addressing the leak at the interference fit, you need to consider other issues that may be caused by the wear in the bore.

Since there is no bushing in the end of the stator support, the interference fit in the aluminum sleeve is the only area supporting the end of the input shaft. The area in the aluminum sleeve where the OE seal lives is larger in diameter and provides no support. It is important to hold this end of the input shaft on a proper center line to give longevity to the planetary gear set at the other end of the shaft and to the bearing that lives between the input and output shafts. Some shops are adding a bushing to this area for support (Figure 5).

The issue of the lack of cooler flow is not as straightforward as the TCC apply shutter issue. Many shops have not recognized this issue. If you are not dealing with an overheating problem, you are not even looking in this area. The problem was exposed because most dyno tests have a pass/fail parameter for cooler flow. For the Sprinter transmissions the pass/fail for cooler flow is between 2.5 GPM and 3.5 GPM. On some converters cooler flow was a low as zero.

No positive seal between the input shaft and the aluminum sleeve.

To understand how a leak at the interference fit can cause a lack of cooler flow, you need to think about the TCC apply circuit. This converter has a three-path circuit, and more important, it is not like the typical three-path circuit used in the front-wheel-drive Fords and Hondas. The Fords and Hondas rely on a bypass valve in the third circuit to control lockup. The 722.6 three-path circuit, on the other hand, uses a valve similar to the “switch valve” in a rear-wheel-drive Chrysler transmission to regulate lockup. This valve is called the “lockup control valve,” and its functions are similar to the Chrysler switch valve. It directs oil to the TCC piston and also moves to vent that oil to exhaust.

Adding the positive seal to the aluminum sleeve restored cooler flow on 100% of the converters, even though it looks like the seal is facing the wrong direction. When you are modifying the aluminum sleeve, it is also necessary to block the vent passage (Figure 6).

This is another pathway to leak if left open.

The Importance of a Positive Seal: 722.6 Issues