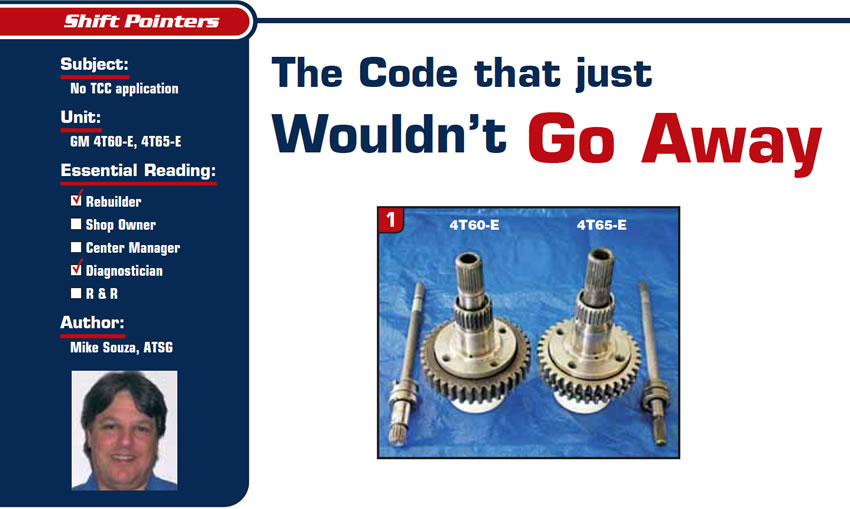 This particular tech call was the usual 4T60-E or 4T65-E transaxle with the code P0741, “Torque Converter Clutch System Stuck Off.” It began as so many times before with the normal question, “Was this unit just rebuilt or is it coming back with this problem?” The next question was, “What repairs have you done to correct this problem?”

Just another normal day at ATSG, when a typical tech call can teach you just how much you don’t know or don’t remember. That’s why I always say this is the toughest job I’ve ever done in 25 years of being in the industry. Sometimes we may fall into a trap from doing repetitive tech calls on the same transmission with a particular problem or symptom. It’s been done so many times that you take the correction(s) for granted.

This particular tech call was the usual 4T60-E or 4T65-E transaxle with the code P0741, “Torque Converter Clutch System Stuck Off.” It began as so many times before with the normal question, “Was this unit just rebuilt or is it coming back with this problem?” The next question was, “What repairs have you done to correct this problem?”

This is when this usual tech call was about to raise an eyebrow. The technician on the other end of the line had really done his homework, and every fix I was about to advise him of had already been done, and some even twice. Here are some of the repairs he had done in an attempt to fix the problem after completely rebuilding this 4T65-E. He had installed two torque converters, two valve bodies complete with new solenoids, and all the possible Sonnax fixes. A new bushing was installed in the drive-sprocket support (stator), and the area where the converter bushing contacts the support was checked for excessive wear.

New sealing rings (these rings sometimes are reused, so I have to ask) were installed on the turbine shaft. The turbine-shaft O-ring was checked for damage and drag inside the converter when the unit was removed for the second time. The TCC shift adapt was reset by “brain-deading” the PCM, along with the voltage signal to the lockup solenoid being monitored with a meter during the road test. Lockup would never apply – there was no engine-speed drop whatsoever – which caused the P0741 code to return on each road test. This was also verified by monitoring the TCC PWM solenoid and TCC-slip percentage with a scan tool. The solenoid command was fine but the slip percentage never dropped by even 1 rpm.

Cooler flow was checked in park and neutral by timing how long it took to fill a gallon container, since the shop didn’t have a flow meter. Then a hose was routed temporarily from one cooler line to the other to bypass any possible restrictions in the cooling system. The technician and I ran out of all the possibilities that could cause this problem – or so we thought.

After he decided to rebuild a different transmission to install in the vehicle, I received a call the next day from the technician that reminded us of the one thing we hadn’t thought of. While he had the replacement 4T65-E transaxle sitting on the bench next to the problem unit, he removed the torque converter, and what he saw next reminded him of what some of us may not have known or had forgotten. The drive-sprocket support on the problem unit was from a 4T60-E, and the one on the replacement 4T65-E unit was correct.

With them sitting side by side he could easily see the difference. The original bushing wear mark on the turbine shaft was extended past the splines of the drive-sprocket support, and this incorrect part was the problem all along. The drive-sprocket support had been replaced on the original rebuild and the new support had not been compared side by side with the original one, and this parts mix-up had gone unnoticed.

As you can see in figures 1 and 2, some of these parts can be incorrectly substituted for each other, and without a side-by-side comparison you might not notice the difference. The parts on the left are from a 4T60-E, and those on the right are from a 4T65-E.

In Figure 3 it’s obvious that you can’t use the single-chain drive sprocket from a 4T60-E in place of a dual-chain sprocket in a 4T65-E. At the bottom of Figure 4 the difference between the 4T60-E and 4T65-E pump shafts is easy to see even if they aren’t side by side. The drive-sprocket supports and the turbine shafts can be mixed up when they’re not compared side by side as shown in Figure 5.

With the drive-sprocket supports removed as shown in Figure 6, you can begin to see the difference at the ramped area between the two turbine shafts.

The difference in length between these parts is about 0.201 inch, as shown in figures 7 and 8. Although this is quite a large difference in measurement, without placing the parts next to one another you can easily miss it.

Here is where the problem comes into effect. When the turbine shafts are placed side by side as shown in Figure 7, you can easily see the difference between the 4T65-E shaft and the 4T60-E shaft below it in the circled area where the shaft ramps down.

It might seem in figures 9 and 10 that if the parts were mixed up the ramped area inside the drive-sprocket support would contact the ramped area on the turbine shaft, which would result in deposits of metal debris or noise during operation. However, this mismatch of parts will not cause any contact in this or any other area that would cause this to occur.

Figure 11 shows the location of the TCC feed orifice along with the ramped area on both the 4T60-E drive-sprocket support and the 4T65-E turbine shaft. The drawing in Figure 12 gives a clear description of what will happen when the shorter 4T60-E drive-sprocket support is placed over the longer 4T65-E turbine shaft. The longer shaft will restrict the oil flow in the TCC-apply circuit at the inner ramped area of the support, causing no lockup application.

I spoke with Jeff Hunt at Whatever It Takes (WIT), who not only enlightened me on this potential parts mismatch but also supplied the parts for the photos. I then asked him whether there was a difference in the bellhousing depth between the two units, and he told me there was a difference of about 1/4 (0.250) inch between them, give or take a couple thousandths, although there was only about 1/8 (0.125) inch difference at the front-seal area.

Special thanks to Brian at Ledgewood Transmissions for the call back – which the tech line does not receive often enough – that made this article possible.

The Code that just Wouldn’t Go Away