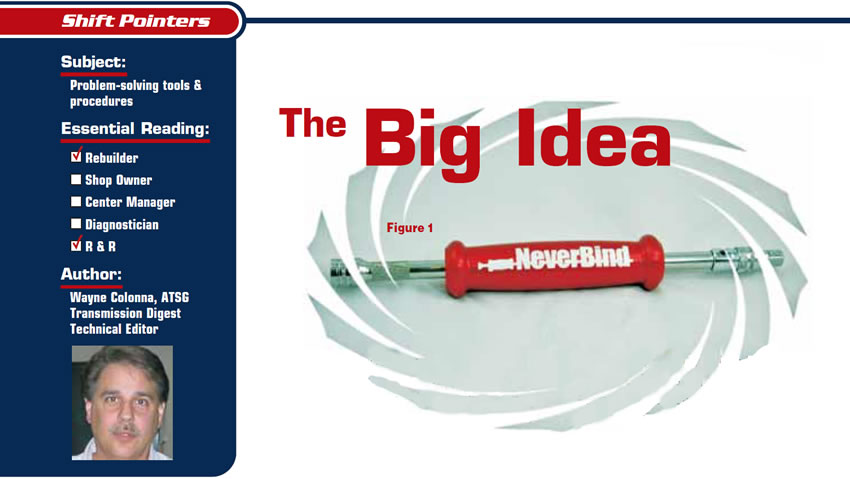 In the transmission business, I too get to meet men and women who from time to time come up with a great idea and develop it into a salable product. I do not have a TV show, but at least I can present to you in this article three fellow technicians who saw a need and brought a solution into reality.

I do not know how many of you watch a program on TV called “The Big Idea,” hosted by Donny Deutsch. He is known as the maverick CEO who built a multibillion-dollar advertising and media business. In the show he introduces to you the men and women who have turned their big ideas into reality.

In the transmission business, I too get to meet men and women who from time to time come up with a great idea and develop it into a salable product. I do not have a TV show, but at least I can present to you in this article three fellow technicians who saw a need and brought a solution into reality.

The first product was developed by a man named Daniel Peluso from New York. I thought, “Who better could write about their own invention than the person himself?” And this is what he wrote:

Tools for mechanics built by mechanics

Ever since the late 1980s mechanics and vehicle technicians throughout the United States have been working cleaner and smarter than ever before.

Most technicians in the field today work with gloves (latex/rubber or a cloth mechanics glove). Most of this is due to common chemicals that are found in today’s repair facilities, but a big part plays on easy cleanup and a professional approach to the customer.

As I worked in this field for the past 20 years I have grown with many changes, adding the expense of latex gloves to my monthly tool bill.

One of the problems that I had early on was that my hand would become entangled on my extension while using a pneumatic wrench. Just as I was stubborn to change and wear a glove, I was just as adamant about taking them off. Within the first few months I had built and tested many different ideas that had come to mind to protect my hand and save me from ripping gloves off.

At this point it needed to install easily, and after two years I had completed a new tool product called NeverBind.

This is a revolutionary new tool that is affordable, fits most brands of extensions and is simple to install. This is an ABSOLUTE necessity for today’s technicians using latex gloves. I have found this tool to work great with long chisel bits for your pneumatic gun. Its self-lubricating Teflon bushing comes in three sizes: 1/4 inch, 3/8 inch and 1/2 inch. The lightweight anodized aluminum handle comes in red or blue.

You can contact Danny by e-mail at [email protected]

The wave of the future

The next product was developed by a man named Russ Sylvis in California. I asked him to write about his invention as well, and this is what he wrote:

Ever rebuilt a Toyota transmission and it shifted hard into drive and reverse and on light-throttle upshifts? Everything you tried – adjusting the linkage, messing with line pressure – didn’t fix it.

The answer is to wave the clutches. In the case of Toyota, it came with waved clutches from the factory, but your supplier sold you flat ones. If you call him back he will tell you either that he has only flat clutches or that there is no such thing as waved clutches. Either way, you will never fix it unless you put waved clutches in it.

There are other cases where waved clutches will fix problems even when the transmission came with flat clutches from the factory.

One case is an AOD with a shift-improvement package. It can have a harsh 1-2 shift at light throttle. If you wave the intermediate clutches it will take the clunk out. I wave at least one intermediate friction on every AOD rebuild.

So you don’t do too many AODs any more? I had an AX4N that shifted hard on the 2-3 shift the first time in the morning. I couldn’t find anything wrong, so I waved the direct clutches and it fixed the problem.

On every E4OD and 4R100 that I do, I throw away the wave plate in the forward-clutch pack and put back the friction that Ford has left out since C6. Waving the clutches keeps it from banging on the N-D engagement. If you remember, at one time Ford used waved steels in the forward drum.

I have gotten reports from other people that they have fixed clunks in Hondas by waving clutches. Anytime you have a light-throttle upshift that is too hard, a closed-throttle downshift clunk or a harsh garage shift, if the line pressure is right waving the clutches will fix the problem, providing the rest of the transmission is in good shape. There is no end to the possibilities.

The procedure is to first mark the clutch to be waved with a felt pen. If a steel is to be waved, put a grind mark on the side of one of the lugs. Put the clutch on the waver with the mark up, and over a rib. The mark will be a reference point if you need to wave the clutch some more, or to turn it over to take out some of the wave. Make sure the clutch and shims are centered. The upper half is then put on top and pressed with a shop press.

For shims, I like to use the old brass 350 pump washers. Break off the tangs. They come in three sizes. Also, use some of the newer thin 350 pump shims that go behind the later Torrington bearing on the pump, or the brass washer at the bottom of the gear train from a 400. Use combinations of these shims to get the wave you want. In general, the fewer shims you use, the more you will wave the clutch.

The larger the diameter of the clutch, the closer the halves need to come together, because the ribs are farther apart as you move to the outer diameter. Start with more shim thickness than you think you need and start taking away until the desired wave is achieved. After the wave is put into the clutch, turn the two halves of the waver over so that the flat sides face each other. Put the clutch in and press it again. This will take out any wave that is going to come out. If the clutch is then too flat, put more initial wave in it. Repeat with flat side. Once you get the routine, it will go like an assembly line.

To measure wave, put the clutch between two flat steels and measure all three. After waving the clutch, put it between the two steels again and measure. The difference is the wave. I like about 0.005 to 0.008 inch.

Before you start waving clutches, stack up the pack and check clearance. Remember, the piston travel is going to be this distance, even though it will seem less after the clutches are waved.

After the clutches are waved, the pack still needs clearance, so don’t get it too tight. As long as you can turn them, it’s probably OK. You may not be able to wave all the clutches in a pack, but that’s OK. Just one waved clutch in a pack can be enough. But wave all you can.

I think this could be the wave of the future.

You can reach Russ through his e-mail, [email protected]

The next product is a nicely designed round bench stone by Randy Bligh, who once owned and operated Advance Transmissions in Wisconsin. He is now living in Illinois, running his new company called Advanced Distributing. This round bench stone is made of a long-lasting silicon carbide with both fine and coarse sides. It has grooves around the center making for a comfortable grip (see figures 7 and 8). The stone quickly and evenly knocks down high spots on valve-body, pump and case castings.

Randy also has written two manuals – one is a quick-reference guide of what’s on when, and the other concerns rebuilding details for the F4EAT transmission – called “The Builders Handbook.” You can reach Randy by e-mail at [email protected]

Automatic Transmission: Seeing the Forest AND the Trees

A 5R110W With Transmission Overheating
Connect with us