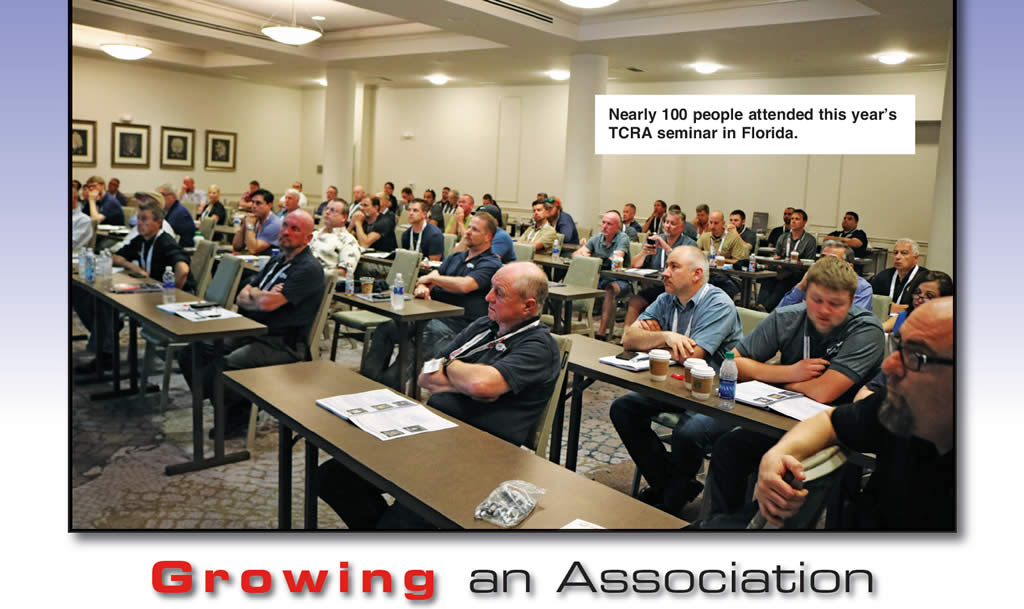 At the recent Torque Converter Rebuilders Association (TCRA) seminar in Coral Gables, Fla., we sat down with the board of directors to discuss the organization, its member and its objectives. We started the conversation with the observation, “There was a time not too long ago when transmission builders would blame the converter for nearly every problem that cropped up after a rebuild.”

At the recent Torque Converter Rebuilders Association (TCRA) seminar in Coral Gables, Fla., we sat down with the board of directors to discuss the organization, its member and its objectives. We started the conversation with the observation, “There was a time not too long ago when transmission builders would blame the converter for nearly every problem that cropped up after a rebuild.”

Board of Directors member Brad Gilbert replied saying, “You mean they don’t still?”

But a history of the organization is tied to the fact that converters are more often than any other component an outsourced subassembly used in a transmission job. The early 1990s was a time of great volume and profitability for the transmission aftermarket and a time when the torque converter received rebuilders’ blame for a lion’s share of comebacks. The converter typically was purchased as a remanufactured subassembly from a converter rebuilder or from a parts distributor that carried a line or two of remanufactured converters. Rebuilders had convinced themselves, sometimes rightly and sometimes not, that remanufactured converters were not as reliable as they should have been.

Myers believed that technical support was a must for the purchasers of these machines and it became apparent to him and his business partner/wife, Carole, that an annual training meeting would go a long way in achieving that support.

The first few get-togethers, aimed at teaching better techniques to machine owners, were basically a user’s group gathering of TCRS customers. By 1997, Myers was sure that an organization to serve the needs of converter rebuilders would benefit the industry as a whole. One of the people involved with Myers at the time was Steve Jaussaud, currently Vice President of Product Line Management at Sonnax. At that time, Steve worked in his father’s transmission shop, a shop that had purchased equipment for a TCRS converter line. He says that at the time, he and Myers visited ATRA in an effort to pattern a converter builders association after the transmission builder’s organization.

And so it was that Reno hosted the first TCRA meeting and seminar in 1997. The character of the group would rapidly change in the next few years as Myers lobbied suppliers, customers and even competitors to take part in the fledgling industry association.

From a customer standpoint, the aftermarket’s affordable converter-rebuilding equipment found acceptance not only with low-volume transmission shop customers but with major converter remanufactures as well. Like transmissions, converters were becoming much more complex as OEM engineers looked for fuel economy in every powertrain component and assembly. The rapidly evolving complexities soon found most shops abandoning the pursuit of in-house converter rebuilding. TCRA membership over the years would evolve from transmission shops with rebuilding equipment to primarily the specialized remanufacturers of converters.

Myers had developed numerous engineering contacts in OEM circles. In those early days, speakers often came from Ford, Chrysler and General Motors, to provide factory advice on how their converters were engineered to operate and what were critical considerations when rebuilding them.

Corky, Carole and the TCRS company provided both structure and direction during the formative years of the association. Once Myers sold TCRS to Superflow, he moved toward retirement from the powertrain aftermarket. The association has continued to thrive, no longer a user’s group for the equipment line but rather as a technically-oriented group of converter equipment and component suppliers partnered with a base of torque-converter remanufacturing companies. The group is focused on increasing the quality of members’ products through sharing of best practices and other technical building information.

This year marked the 21st annual formal meetings and seminars sponsored by TCRA. Gilbert, who represents High Torque in Idaho said, “I think our biggest job is trying to educate our customers, ¬mostly transmission shops, on torque-converter issues and to help them to diagnose what is a torque-converter issue as opposed to a transmission issue. As an industry association that’s one of the important things we do, the other is the common pool of knowledge. When we figure something out at our shop, it’s something that might help another converter builder down the road.”

Former TCRA President Jeff Stuck, who oversees the converter department at Certified Transmission, added, “There’s a job to do in getting other converter builders to understand the value of the organization. Those of us who’ve been a part of TCRA for a long time have established relationships that allow us to lean on somebody when we need something. That’s the most important benefit that the association has given for me. Until you’re involved with these guys you can’t realize the value of that.

“The guys who aren’t members, who don’t participate in the annual seminars and the information exchanges at our website probably don’t know the advantages that the organization offers. That’s something that we who are routinely involved understand.”

Board member Eric Saxberg, Saxco Torque Converters in San Jose, Calif., adds, “I get great value from my participation. There are many times that I’ll call Jeff or Rafi because I’m stuck on a converter issue. It’s because I’m coming to these programs that I know them well enough to call someone, even a competitor, to discuss some of the tough issues we run into.”

Gilbert recalled, “The other day I had trouble finding a stator for an old 650 Allison. I remembered that was a specialty of Arnold Henry’s who did a lot of Allisons. I called his son who had taken over management of the company and, problem solved! Had I not met Arnold through TCRA events, I might still be looking for that stator.”

President Martin Brooks, who operates New Zealand converter remanufacturer Aceomatic – says one of the great benefits is a website that over the years has become a repository for a great deal of information for members.

Borg Warner engineer Chris Horbach serves as TCRA’s executive director. He too believes that information available to all members on the organization’s website is priceless. “The website is full of information and resources for guys who want to build a good torque converter product. There are technical specifications (dimensions, clearances and those types of measurements) there that aren’t easily available from any other single source. It’s important to have those specifications so that guys can build their converters to a standard.

“We’re trying to stress with transmission shops to buy converters from a TCRA member. We want to stress to those transmission builders that there’s added confidence in the product that comes from one of our member converter builders. Our website homepage contains an always up-to-date map showing where our members are physically.”

Raffi Pilavjian operates International Torque Converter in Fresno, Calif., and serves as vice president to TCRA. He observes, “Some shops have the ability to diagnose the difference between transmission and torque-converter issues correctly, some don’t. This is most often the result of a lack of knowledge because guys aren’t going to the seminars.”

Agreeing, Horbach adds, “Attending the annual TCRA seminars can be very valuable for transmission builders as well as the guys who make their living specializing in converters. There are a lot of transmission issues that affect how the torque converter performs. For example, Bob Warnke from Sonnax speaks every year about hydraulic circuits. So control [valve] bodies, solenoids, hydraulics; all of these have a direct influence on the operation of the converter and even engine performance. The converter is the little thing trapped in the middle that often takes the blame for a symptom of something that’s a calibration issue, engine performance issue or even a leaky hydraulic circuit.

“The converter industry, more than others I’ve seen in the aftermarket, possesses, of necessity, a lot of creativity. Take a torque converter that’s welded together: How do you get it apart? Once it’s apart, how do you get the inside components apart? That’s half the battle. The other half is how to you put it all back together? Our members have engineered their own tools, equipment and processes to put these back together when the OEs won’t share information and there’s no other resource. These guys find ways to do it and share their processes with the other members.

“This is an organization that has been and will continue to be an intricate part of the success of the members’ businesses. Anyone who is interested in more information or joining our organization should visit us online: http://www.tcraonline.com. I think we have something special here, something that benefits the industry as a whole and something we’re proud to share with others in the torque converter and transmission aftermarket.”