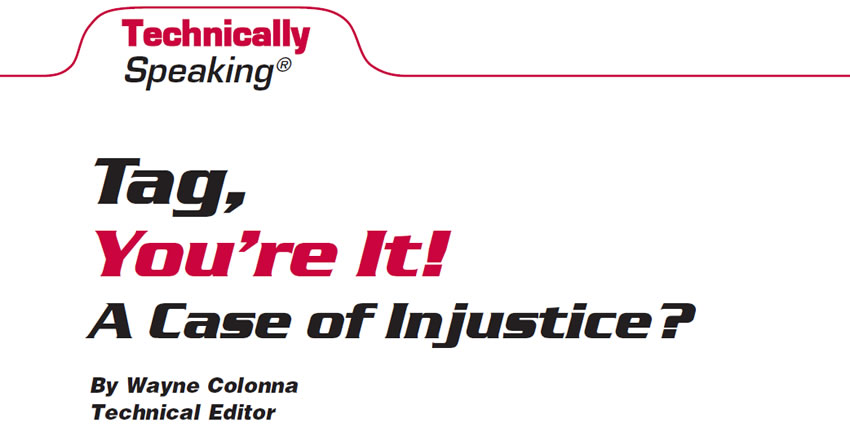 “The Hazardous Waste Manifest System is a set of forms, reports, and procedures designed to seamlessly track hazardous waste from the time it leaves the generator facility where it was produced, until it reaches the off-site waste management facility that will store, treat, or dispose of the hazardous waste. The system allows the waste generator to verify that its waste has been properly delivered, and that no waste has been lost or unaccounted for in the process.”

Every shop owner is all too familiar with the EPA requirement to provide a manifest for hazardous- and industrial-waste products. The EPA describes the Hazardous Waste Manifest System as follows:

“The Hazardous Waste Manifest System is a set of forms, reports, and procedures designed to seamlessly track hazardous waste from the time it leaves the generator facility where it was produced, until it reaches the off-site waste management facility that will store, treat, or dispose of the hazardous waste. The system allows the waste generator to verify that its waste has been properly delivered, and that no waste has been lost or unaccounted for in the process.”

The key component of this system is the Uniform Hazardous Waste Manifest, a form prepared by each generator that transports, or offers for transport, hazardous waste for off-site treatment, recycling, storage or disposal. The current manifest is a paper document containing multiple copies of a single form. When completed, it contains information on the type and quantity of the waste being transported, instructions for handling the waste, and signature lines for all parties involved in the disposal process. The manifest is required by both the Department of Transportation and EPA. Each party that handles the waste signs the manifest and retains a copy for itself. This ensures critical accountability in the transportation and disposal processes. Once the waste reaches its destination, the receiving facility returns a signed copy of the manifest to the generator, confirming that the waste has been received by the designated facility.

This manifest is a paper trail so that the government can identify the generator of waste products that require specific transportation and off-site treatment, recycling, storage or disposal. Of course, the company that transports the waste product is to transport that product and dispose of it correctly, and it, too, must provide a manifest to the government and the generator facility confirming that the product reached its proper destination according to law.

Now, one would think (and I am speaking about the generator; that is, you, the shop owner) that by having a manifest in hand you have performed your social and environmental duty as a business owner and a law-abiding citizen of the United States of America. You can present that documentation to any EPA official and feel peace of mind because you have done the right thing. Well, for those of you who think this is the case, I need to break some really bad news and at the same time give you a very serious heads-up.

In Florida, public records reveal that a company called Florida Petroleum Reprocessors (FPR) reprocessed waste oil from 1978 to 1992 in a sloppy manner. Large amounts of waste oil were routinely spilled and leaked from tanks onto the ground, causing extensive soil contamination. This waste oil contained hazardous substances including perchloroethylene, trichloroethylene and trichlorethane, two of which are known to cause cancer.

The EPA has been studying the problem since 1996 and has outlined possible remedies in a report called a Remedial Investigation/Feasibility Study. The EPA then chose a long-term remedy in another report called a Record of Decision. Aside from companies that had sent large volumes of oil to that site assisting in the cleanup, the EPA has incurred more than $5.5 million in cleanup costs.

Congress enacted the Comprehensive Environmental Response, Compensation and Liability Act (CERCLA), commonly known as Superfund, on Dec. 11, 1980. This law created a tax on the chemical and petroleum industries and provided broad federal authority to respond directly to releases or threatened releases of hazardous substances that may endanger public health or the environment.

This also gave the EPA the authority to include parties that arranged for the treatment, disposal or transportation of hazardous substances to a site. These companies are referred to as generators. The EPA obtained information indicating the generators that arranged for the disposal of waste to the site. And where do you think they obtained that information? You guessed it – the manifest, the paper you may have thought gave you peace of mind for doing the right thing.

As generators, about 1,400 businesses are being held responsible for the poor operational practices of FPR. And since the amount of waste that each generator sent to the site was minimal compared with the total amount the site received, they are considered de minimus, or minor, generators with regard to the site. EPA defines a de minimus generator as one that contributed 10,000 gallons or less. What this means is that these roughly 1,400 businesses are divvying up the total cost incurred by the EPA to clean up the site. The letter sent to these generators explains that they will have to pay $3.83 for each gallon of their waste oil that made its way to the FPR site.

How many gallons of waste oil have you had hauled away over a 14- to 15-year period? Some shops are facing an unexpected bill of nearly $35,000 that they are expected to make in two payments, the first being 75% of the total and the second 25%. And if they fail to pay within the time required, they must pay interest on the unpaid balance at a rate specified for interest on investments of the EPA Hazardous Substance Superfund, compounded annually, on Oct. 1 of each year. The EPA also may seek injunctive relief to compel payment and/or seek civil penalties; i.e., jail time. How is that for justice! This means that regardless of who is taking away your waste oil, you are still held liable for what happens to that waste oil, even if the transporter gives you a manifest indicating that the right job was done.

There is no easy answer here. Perhaps all companies that transport and dispose of hazardous waste should be under tighter and more-frequent inspections from the EPA or from state agencies. There are companies in Florida that are going to go out of business as a result of this great injustice. This is not the kind of “tag, you’re it” any company wants to play.

It would be nice to see trade associations representing businesses that could be subject to this type of injustice pull together and show Capitol Hill that we have clout to pursue a more-just and equitable means to resolve this type of situation. The EPA Superfund was created to pay for costly cleanups of messes made by companies that didn’t have the money to clean it up. But not here; we have 1,400 companies we can bang for the money.

In my opinion, we need to solve this with a preventive solution: tighter regulation and procedures for the transporter and companies that reprocess to prevent improper handling of materials. Frequent waste-site inspections could prevent such a large disaster. Perhaps the companies that transport and dispose of hazardous waste could be required to provide financial guarantees, insurance policies or escrow accounts before being licensed.

Maybe these requirements are already in place but were not during the time FPR contaminated the ground; I do not know. Although these shops are considered generators, how about the car manufacturers that designed the cars to operate with fluids? They are the main generators. When there is a lawsuit, don’t they go after everyone involved? Obviously I am being ridiculous, but so is the EPA in going after businesses that abided by the law.

Tag, You’re It! A Case of Injustice?