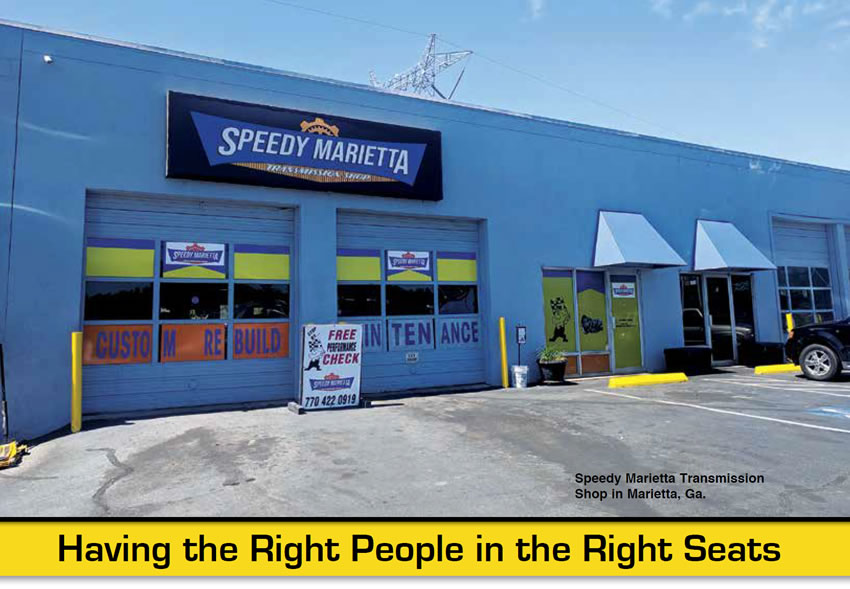 Kristina Magic spent 22 years in the telecommunications business, in a constant state of working and trying to excel but then being laid off.
Now she’s the owner of a successful transmission repair shop: Speedy Marietta Transmission Shop.

Kristina Magic spent 22 years in the telecommunications business, in a constant state of working and trying to excel but then being laid off.
Now she’s the owner of a successful transmission repair shop: Speedy Marietta Transmission Shop.

But how did she get to where she is? “I assure you I did not grow up a little girl believing I would own a transmission shop,” she said.

Things were not easy for Kristina when she came to Georgia. “My family helped me so I could pick up a second job waiting tables,” she said. Her family helped her take care of her kids while she continued pursuing telecommunications and striving to rid herself of debt, which she did.
“I paid off my debt and then I got laid off in telecom again,” she said.
She moved to Georgia with very little money and sought help from family members. “About 9 years ago I left Ohio with $136 to my name and $100 of it was a gift from a neighbor,” she said.

While her family helped care for her daughters, she was offered a chance to sell transmissions. “One of my customers owned three transmission shops, and he asked me to come sell transmissions,” she said. It was a daunting task for her because, at the time, she knew very little about transmissions and the world of automotive repair in general. But then things progressed very quickly: “I came in and a few weeks later the franchise holder presented me with a lease assumption and a franchise agreement and said ‘I think you’re going to do great.’”

Next thing she knew, she was signing onto a franchise agreement. Speedy Marietta is no longer a part of any franchise, though it used to be. They went independant last year.

Kristina has a different approach to success than many. Speedy Marietta has a contract, or deal of sorts, with 16 other repair facilities. All of the repair facilities, Speedy Marietta included, work together in a way. They recommend jobs for one another, help each other, and don’t steal work from one another. Kristina has found success by cooperating with other shops instead of viewing them antagonistically or threateningly.

This cooperative, non-threatening nature is one of the things that Kristina said makes her shop stand out. She called it a “round-robin referral basis.”

Speedy Marietta operates eight bays and six lifts and currently has four employees besides Kristina herself, of course. She said they work an average of 12 jobs per week, though recently they have been much busier.
Kristina thinks that the customer service at Speedy marietta is truly the stand out trait of the shop. She deems it important to “do whatever it takes to make the customer happy.”

She tells her employees that when a customer is upset, it doesn’t matter if the reason for them being upset has anything at all to do with their service or their skill; she instructs them to always strive to fix whatever problem the customer may have. Kristina calls customers and surveys them herself in order to help keep track of feedback. When she calls them, she said that not one of them ever really talks about the technical aspects of the transmission work, but will instead gush over the incredible customer service, and being treated like a family member in need.

In essence, Kristina believes in going above and beyond for the customer. Truly she believes that the customer service at Speedy marietta is their “Claim to fame,” she said.

“I have the ability to help someone make a good financial decision,” she said. She also believes in fair pricing, and not charging for a service that just doesn’t work. “We don’t charge somebody for something they aren’t getting,” she said.

Kristina also knows the value of staying up to date on technology and service, and requires all of her technicians to attend local workshops and highly encourages them to attend ATRA in Las Vegas if they can.

They are also encouraged to participate in webinars and other instructional activity.

Kristina said that for the first four years or so it was just so surreal that she owned a transmission repair shop of her own that she could hardly believe it. She felt “oblivious.”

But though she’s a woman in what is still a predominantly male industry, she said she doesn’t face any real discrimination and that the men in the business have been willing to talk to her, and she tries not to appear threatening. Her shop also has a female technician, Kristina said, which also might be seen as unusual or a little odd but Kristina said her female tech works just as hard as anyone else.

One thing Kristina certainly encourages around the shop is mentoring, and her female tech, Kate Crum, is being mentored by their Master Certified Builder, Chris, who is consistently patient and a good teacher.
Other things that she said make the shop stand out include how family oriented the whole team is. She said that all of her team members are stand-up people; they are all family people and professional.

Another aspect of her shop that makes it unique, she said, was the unwavering ability to ask for help whenever it is needed. They are part of the Transmission Brotherhood and they always reach out to resources for help when they need it. This humble approach to being able to get help is one of their traits of success.

Kristina mentioned that the Speedy marietta website will be updated soon,a s she knows the importance of a good online presence in any business.
The website has a good deal of useful content, but she said she would like to make it easier for customers to navigate.

She said that though Georgia doesn’t have any transmission rebuilding standards the way some states do, Speedy marietta still held itself to a high standard. She said they use the highest quality parts – OE quality or better – and always gave a transmission a complete rebuild, in addition to using full synthetic fluid. She said making these extra expenses up front helped ensure customer satisfaction and helped them attain a less than 5% come back rate for their customers.

Speedy Marietta also uses a texting program to give the customers constant updates, and can provide them with either shuttle or rideshare services. Outside of general transmission repair work, the shop also performs fleet and retail services.

Part of the reason for their current success, she stated, was that “it is essential that I have the right people in the right seats on the bus; Everyone has an important role.” She stressed having good, qualified employees.

Currently Kristina has no plans for expansion of the shop; it’s doing well and her goal for the time being is to maintain the shop’s reputation in the county.

There’s no doubt the shop is getting plenty of work. Kristina hardly had time, in fact, for an interview, because of how busy she had been. She called it the “busiest week we’ve had in months.”

Speedy Marietta: Having the Right People in the Right Seats