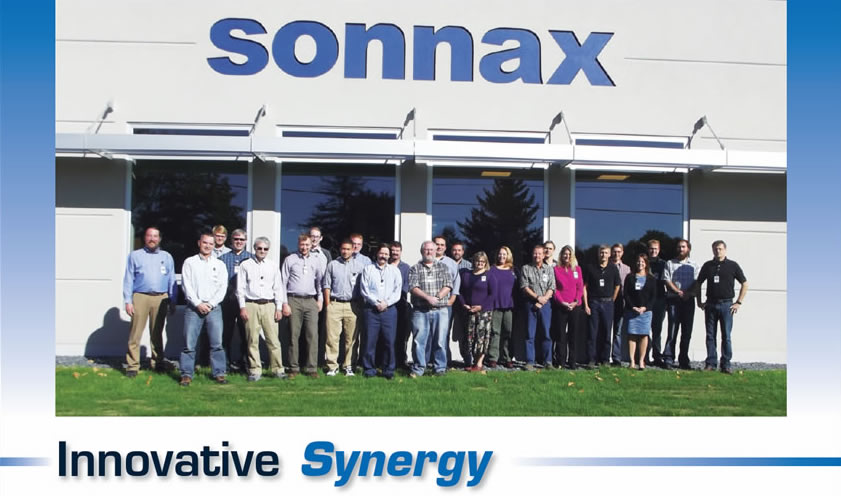 Within the past few months, Sonnax has been busy expanding its corporate campus, acquiring a third building that has been renovated to house the company’s product managers, product support team and development engineers. The pairing of engineers and product line managers wasn’t accidental but rather a strategic reflection of a reorganization of company structure a couple of years back. Sonnax Senior Vice President of Product Development.

Within the past few months, Sonnax has been busy expanding its corporate campus, acquiring a third building that has been renovated to house the company’s product managers, product support team and development engineers. The pairing of engineers and product line managers wasn’t accidental but rather a strategic reflection of a reorganization of company structure a couple of years back. Sonnax Senior Vice President of Product Development.

Steve Jaussaud, who leads those operations, discusses the newly opened Sonnax Research and Development Center, saying, “It’s very exciting! We had outgrown our single bay vehicle work area, and the engineering lab was really getting cramped for space. Now we have the shop and office space to work more efficiently. That’s something that is a big investment now but will pay for itself over time.”

The Sonnax Research and Development Center is a 26,000 square-foot facility that boasts an additional 4,000 square-foot mezzanine used for storage. Jaussaud says finding a building that was located between the main Sonnax plant and the distribution center was a bonus. All three buildings lay within a three-block area bordering the Connecticut River just north of Bellows Falls, Vt.

Longtime Sonnax engineer Scott Jackson supervises a 25-person engineering group that develops Sonnax products across company product lines that include torque converter components, automatic transmission parts, remanufactured valve bodies, driveshaft components and high performance automatic transmission parts. “It’s much easier to coordinate our work, like testing of products,” he explains. “It’s easy for us to get together where we can all examine a product being tested and, at the same time, exchange ideas.

Jackson says that additional engineering people who work off site include Maura Stafford, Bob Warnke, Ed Lee and Jim Dial. “Those are people who tend to work more directly with the customers and communicate with the staff here to keep up on the pulse of our customers,” he reports.

“We field all the questions. For instance, a rebuilder calls in and says I’ve got a mating part here that isn’t pictured in the instructions that came with the part. Most usually we know that a variant of the OEM original design is out there. Sometimes it’s that phone call that tips us off concerning a variant.

These calls will trigger us to make a change to the instructions that are supplied with our part and we will update the website with that information as well.

Gregg Nader had been one of the engineering team at Sonnax before taking the reins as product line manager of the performance transmission parts line.

Nader agrees with Jackson’s assessment, adding, “What they’ve done is put all the people and equipment in the space we have here. Coupled with the organizational changes, we have a very unique ability to work directly on the parts we’re developing with both the product line managers and the engineers. It’s making our R&D process more efficient and less time consuming.”

“The uniqueness of Sonnax is the synthesis of guys who came out of shops as technicians working alongside our engineering group,” adds David McGee, the company’s senior vice president of sales and marketing. “Most companies are either OE companies that are heavily focused on engineering or there is a focus from guys who came from a shop background who have ideas about how things should be fixed. My observation is that the blending of those two technical viewpoints is unique to our organization.”

Marketing Director Beth Houder adds: “That synergy allows us to create highly-engineered parts served by a very practical approach that keeps both fields of expertise focused on the same goals at the same time.”

McGee explains that the company’s large and growing transmission specialties line provides builders with both hydraulic products (valves and controls) as well as mechanical components including drums and input shafts.

“We address problems found with OEM design,” says McGee. “Take for instance the Ford forward clutch drum. The OE part was stamped steel; it looked like corrugated steel around the outside and it had a snap-ring groove. When pressures rose too high, the whole part of the drum where the snap ring was would just split. To address that issue, we designed a forged product that had been machined to overcome that issue. It’s become a very popular part from a sales standpoint.

“We call a lot of these items high-performance components, and the performance people scarf them up. But we also sell a ton of these through our distribution into transmission shops that simply think of them as transmission parts. They use it not to make the car go fast but because it makes their rebuild a more robust unit – less likely to fail.

“The same is true of the Sonnax SmartShell and the 4R70 high capacity forward drum. Whenever we develop a part that’s as good as it can get, we package that as the Smart-Tech sub brand. Right now we have half-a-dozen or so Smart-Tech parts. The newest release is the Chrysler overdrive housing for the 68RFE units.

“We kept getting reports of problems with that part and we have engineered something more robust than the OE part, and while we were at it, we made it so you could put some additional clutches in there and that type of thing. If you’re engineering it from that point, it’s not going to cost any more to add those features in.”

Mark Kaplan, vice president of Sonnax sales, adds, “That’s a perfect example of what happens when you have the product manager’s mechanical mindset and the engineering mindset collaborating on a project.”

Sonnax President and CEO Tommy Harmon observes that innovation and growth encompass more than the R&D functions as they are tied as well to the firm’s employee ownership (ESOP).

“As a result of the company being 100% employee owned, nearly every team member understands that the more satisfied our customers are, the more valuable their ownership share becomes. Our decisions are very long-term based now, whereas companies with outside investors often make decisions focused more on the short-term benefits. We’re making decisions today with an eye toward the benefits they bring five, 10 or 15 years in the future.

“What’s truly great about the ESOP is that the employees aren’t required to invest anything beyond their work, their sweat equity. The value of their ownership continues to grow year after year and there’s an ever-stronger understanding of the connection between the success of the company in pleasing our customers and the growth of an individual employee’s ownership value.”

McGee continues to extol the ESOP structure, saying, “Sonnax benefits from the people being invested in the company. It’s more than just a paycheck.

We just closed the fiscal year and are preparing for our sixth annual meeting with the employees this coming spring. The value of the program gets to be greater each year as more shares are distributed from the trustee to the employees who also divide the shares from people who retire or otherwise leave the company.”

Concluding, McGee says Sonnax maintains a unique position in the industry based on its equally unique approach to improving on everything behind the engine and in front of the axle. “Sonnax is as much about a philosophy as it is about the products. Sonnax products, no matter which product line we examine, serve the Sonnax philosophy of addressing the root cause of a problem, not treating the symptoms.”

“There are a ton of guys who spend their money on their cars or their trucks. They DIY just about anything on their vehicles themselves except for the automatic transmission. That’s a do-it-for-me job.

“If a shop can set itself up in its area as the go-to performance transmission shop, there is a significant amount of business to be done. So we say that instead of using that bay for a series of $100 general repair brake jobs, how about using the bay for a $5,000 performance job, working in popular units with which they are already familiar?

“Most transmission shops have access to the parts they need to build a performance transmission. At this point the job relates to consumer products. It’s not using parts the driver doesn’t know or understand to get the car back on the road. This guy isn’t likely to just be upgrading the transmission, there’s a lot of other work he’s probably doing to the vehicle as well. The shop can take its time building a custom transmission and go though all the various upgrades available for his 4L60 or other unit that relate to horsepower and torque for that specific vehicle. The wonderful thing about that type of work is that performance – rather than price – is the vehicle owner’s objective. These guys are enthusiasts and they spend money on their car in the same manner a golfer will buy a $1,000 driver.

“There’s a different philosophy that causes a lot of transmission builders to shy away as soon as they hear high performance. They just know that that’s going to break. Everything done in the traditional transmission business has been to avoid a comeback. With a performance customer, the first thing he’s going to do is try and break it. But these people don’t come back to the shop wanting it fixed for free, they’ll want to know how it can be made even better, which translates into ‘How can I spend more money on this?’”