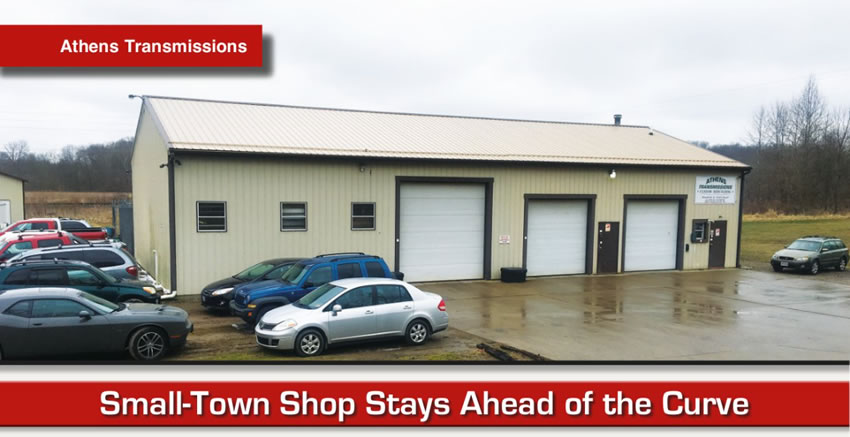 Athens Automatic Transmission has been in business in Athens for 23 years, Co-Owner Patrick Gryszka said. Originally owned by his parents, Patrick said he himself had never had any intention of going into the business.

Athens, Ohio is a small college town with a population of about 25,000. People in small towns tend to know one another. Everyone knows which grocery store to recommend, their favorite dentist, the best place to go catch a late movie showing.

The same can be said of automotive services: the most recommended place to by a used vehicle, get a carburetor fixed, a tire changed, etc.

Athens Automatic Transmission has been in business in Athens for 23 years, Co-Owner Patrick Gryszka said. Originally owned by his parents, Patrick said he himself had never had any intention of going into the business. Patrick never thought he’d be in the automotive repair industry- though he refuted that he never dreamed of running away to Hollywood to become an actor. He actually worked for several years in prisons as a correctional officer. “When I was 18 I moved to Florida and when I returned home I got a job at the prison.” While working nearby the old family shop, he said that he slowly began to come by the shop more and more often- helping with this, toying with that, until, before he knew it, he was thoroughly involved in the business. “Eventually I ended up working full time at the shop,” he said.

As for his brother and Co-Owner Andy Gryszka, he tried a year of technical college- and studied the culinary arts, but it was not a passion for him. He said, “I still have a love for automobiles.” And that love brought him back to work in the shop with his brother. Andy believes that the “family atmosphere” of Athens Automatic Transmission is the best thing about it. He loves getting to work and fixing problems for people to ease the customers’ minds. Andy describes himself as the “younger, better-looking, smarter brother.” That said, he did express that he and his brother got along and worked together well.

Their father, Patrick said, had always been good with his hands when it came to transmissions. His father began rebuilding them at the age of 16, and was always talented with them. His father later became a coal miner, but returned later to the repair industry and ran the shop for years along with his wife. “All I remember is my dad being out in the garage under a car.”

The business, although originally intended to handle only transmission servicing, later began to include other repair services, and now subsequently performs a wide variety of repairs in addition to transmission work. Patrick said that it began to expand because many automotive problems are mistaken for transmission issues. “Anymore you have to diagnose different problems when people think they’re having transmission problems and they’re not.”
He said this led to the work philosophy of: “Car’s already here, you might as well fix it.”

The building itself has 3 bays indoors and one outdoors, and Patrick intends to continue expanding and adding room to his business. When he first purchased the shop from his parents, it was smaller. “After 12 years we expanded another 40 feet. We’re constantly trying to grow.”

Adding room is important to him considering how many referrals the shop incurs. Patrick said they do, on average, at least five transmission jobs per week, not counting the numerous general repair jobs that are taken in.
Patrick believes the key o running a good business is consistently taking care of the customer and cutting no corners in repairs. The shop therefore keeps up a great reputation within the community. Patrick said it’s not unusual for them to receive referrals from up to 50 miles away because of their reputation.

Patrick describes his shop as being the “friendliest in the area,” and trusts his employees to carry that tradition every day.

Patrick said that local college students make a large number of his customers. He says he gets students “all over the board,” though he has noticed, with many of these younger customers, it’s their parents who make the actual appointments for their children.

Athens Automatic transmission is undoubtedly a small operation- Patrick said his current workforce consists of himself and two employees- but that doesn’t stop him from dream of expansion and furthering his business. And he sais that what his workforce lacks in size it more than makes up for in talent and customer service. “We are super friendly- we’re considered the friendliest mechanics in the area. I have the best employees in southeast Ohio in my opinion and that’s another reason why we stand out.”

Patrick said that working with family is always tough, but Patrick contends that the reason he and Andy are an effective team is their ability to “leave work at work.”

“It’s just something we’ve been able to do,” Patrick said.

Luke Radcliffe, an employee of Athens Automatic Transmission, said he was originally working for a competitor before moving to the shop. He said the previous shop he had been working for “wasn’t going anywhere.” He was interested in Athens Automatic because it would “only sell people the work that they need.” The shop does not, he said, add on unnecessary fees and makes sure to diagnose problems correctly the first time so that they wouldn’t have to do unnecessary repairs that wouldn’t actually help. He also said his previous shop was bad about getting him what he needed, but while working for the Gryzska brothers, when he needs something to finish a repair – tools, service info, etc. – they are quick to supply him.

Scott Cooper, another employee, also enjoys working in a family business. He said that he felt like a part of the family while working for them. He, like Luke, previously worked for and then left another shop to work for Athens Automatic Transmission. He said that previously Athens Automatic Transmission would share information with other shops, and would assist with transmission jobs. He felt comfortable moving to the shop because he had known the others there for some odd 20 years.

The shop does everything it can to stay up-to-date on repair technology, and be progressive in their techniques despite being a small-town business. In addition to being the only transmission shop in town, Patrick said they are also capable of doing reprogramming on vehicular computers, and subsequently can do repairs on modern cars that some shops can’t. To Patrick, staying modern in his services is of very high importance.

Patrick explained how, to some of his customers, emotional attachment guaranteed they would always come to the shop to fix cars that would be better off replaced. He said that recently he had a Volvo come in that had been in a wreck and would have been easy to replace, but the customer would prefer to fix it and pay for repairs. Patrick didn’t think she would want to repair it, but he feels it’s best not to judge a book by its cover.

Patrick said he had never personally been one to become emotionally attached to his cars, and never had an issue replacing a vehicle that had lived past its expiration.

Athens is a town that is certainly small, but Patrick described as “spread out,” and therefore even local customers have to sometimes make a fairly long drive to come to the shop. But he feels that the superior customer service is worth it to his clientele. “We try to take care of the customer better than any other shop.”

Patrick’s greatest aspirations are to expand his business by adding room to the building and also adding more lifts and increasing his ability to work on CVTs, a fairly popular transmission style recently.

Patrick also wants a greater ability to work on electric cars, because of their popularity in today’s world.

Patrick’s philosophy on expanding his services concerning vehicles with ADAS systems is, as with other areas, to stay up-to-date but not at a great expense, or before it becomes necessary. His advice to other shops would be not to watch and see what others are doing, but rather to keep track of their own demographic and ensuring that their shop provides the services that their specific customers require. His view is that every area is different, and every shop’s abilities should reflect its area’s needs.

He believes in being prepared, but not immediately buying a lot of expensive shop equipment before it becomes necessary to do so, especially considering his rural location. The only job, which he says he has seen with any major ADAS abilities, was a car with the self-parking feature. “We will try to stay ahead of the curve but at the same time focus on … your shop and clientele and focus your business toward that.”

Patrick states that when the shop first opened it was not nearly so successful and beloved in the community. Mechanically, it was sound- but Patrick said they had not yet mastered managerial prowess. He said that information provided by Transmission Digest aided the shop greatly. He even mentioned Terry Greenhut and his audiotapes as being incredibly beneficial to his parents and the shop’s success. “As the shop continually stayed in business they would go to seminars. They ordered the Terry Greenhut tapes out of your magazine. it was your magazine that really helped us,” Patrick said.

Small-Town Shop Stays Ahead of the Curve