His grandparents warned him that the transmission industry was a “tough business.” But Matt Fryar, who grew up around the business, ended up in it anyway.

The family shop, Fryar’s Transmission in Pearcy, Arkansas, was opened in 1965 by Matt’s great-grandfather, Weldon Fryar. At the time it was called Fryar’s Garage and was a general repair shop, but over time, Weldon made transmissions his specialty.

“He became known for transmission repair in the area, and ended up just deciding that he was just going to stick to transmission work, and opened up Fryar’s Transmission,” Matt shares.

From the start, Fryar’s was a family business. Weldon’s wife, Faye, was the secretary, and his three sons, David, Mike and James, all worked in the shop as well.

After Weldon’s retirement, David Fryar and his wife Liz (Matt’s grandparents) took over the shop and ran it until a decade ago, when ownership passed to Matt.

“I grew up right across the street from the shop,” Matt says. “From the time I was a little kid, I’ve spent basically my whole life here, anytime I wasn’t in school. I grew up in the shop and I’ve been here ever since.”

Fryar’s started as a largely family-operated business, but as Matt puts it, over time “we ran out of family.” Now with a staff of seven, Matt is the only Fryar on the team, which currently consists of a secretary, three R&R guys and two rebuilders.

Additionally, David Fryar, now 70, still comes around the shop and does some things like picking up parts and running errands, but he is retired and doesn’t work full-time anymore.

The shop today is around 4,500 square feet and has six bays, a rebuilding room and a parts room. Fryar’s specializes in transmissions and does little general repair work.

“We do transfer cases, differentials, u-joints, mounts, electrical work,” Matt says. “If the vehicle is here for a transmission repair and there’s some other general repair work that needs to be done and the customer wants us to look into that, we will. But we do our best to try not to step on the toes of other shops in the area because we get a lot of referrals from the general repair shops around here, and they send us a lot of transmission work. So we stay extremely busy with what we do and try to stick to that.

“Right now we’ve been averaging about a month out on rebuilds for the past six months or so. As far as volume goes, at any given point we’ve got something like 70 or 80 cars on our parking lot.”

As you might expect, Matt learned plenty of lessons growing up around the transmission business.

“Everything I know and everything that I have, as far as the foundation goes, came from my grandparents,” he says. “They put me in this position, gave me an opportunity and showed me everything they could. They’re still close by, and if I ever need anything or need any help, they’re still there and very involved, if needed. I’m definitely fortunate for that.

“When I was in high school I was here at the shop during the summers doing R&R work with my uncles,” he says. “They would have me tearing down cores for scrap, and getting familiar at that time when I was little and moving on from there. So when I learned to rebuild, my grandfather taught me everything from scratch. I started at R&R and then was taught how to rebuild before he retired.”

From his grandmother, Matt learned more about the business and customer-facing side of things.

“I grew up in the office as a kid and learned how to handle customers and talk with customers, and learned a lot of terminology and things like that just from being around my grandparents my whole life,” he says. “My grandmother handled the office, and I ended up running the office for a while at that point and learning more of the business side of it there.

“The way this business runs is something that, and they’ll tell you this as well, you’ll never just completely master the trade because it’s always changing,” he adds. “Anytime there are seminars available, we’ll participate in seminars in our area and continue education and stay on top of things. But most of everything I know is just continued education on the foundation that I was given from my grandparents.”

Living up to the reputation

As you might expect, with this kind of reputation preceding him, there was pressure on Matt to live up to the standard set by his grandparents and great-grandfather in the business.

Now 29, Matt started at a young age and had to build a reputation of his own and earn trust from his customers.

A lot of it, he says, just came naturally after growing up around the business.

“The way that I view everything is if you treat people right and give them a reason to think highly of your business and yourself, they’re going to return, or they’re going to send other people to you,” he says. “And that’s the biggest part of it.

“I mean, there was definitely a lot of pressure and it’s taken a long time to feel like I could handle it on my own. But I think that we’ve, if anything, grown over these last several years.

“My grandfather had gotten to the point where he was taking in a little bit less work, being a little bit pickier about the jobs he would take in and kind of slowing down a little bit, trying not to overwhelm himself right before retirement. And then when I came back, we kind of flipped a switch and just went back to the way things were, started bringing in a lot more work and built the business back up. And I would say we’re as busy or busier than we’ve ever been.”

A lot of that, of course, comes down to the team at Fryar’s.

“The culture here at the shop is amazing,” Matt says. “Everybody gets along well. That’s a big, big part of it as well, having it staffed by family for so many years, and then going to hiring in employees and getting the right people in here.

“We’ve been blessed to get a very good crew. We’ve got guys that we’ve taught from scratch. All three of our R&R guys have been taught from nothing. As far as the culture goes, we have a very, very good environment to work in. That helps with things as well.”

So what makes Fryar’s stand out, in Matt’s mind?

“Well, we really just take pride in our reputation,” he answers. “Like I said, we’re very well-known in the area. We pride ourselves on quality work at a fair price. I think we’re very competitive with any shops in the area as far as price goes—and most of them don’t rebuild.”

For a shop that doesn’t do much in the way of advertising, that good reputation that has spread by word of mouth is incredibly important—and at the heart of gaining a good word-of-mouth reputation is doing good work.

The numbers bear this reputation out: a quick Google search shows 84 Google reviews for Fryar’s Transmission, with an average rating of 4.9 stars out of 5—an incredibly strong number by the standards of fickle online reviews.

Fryar’s also benefits, as Matt mentioned before, from a symbiotic relationship with the general repair shops in the area. Pearcy, a community with a population of just 306 according to the 2020 census, is in central/western Arkansas, one hour west of Little Rock and centrally located for many of the state’s major areas.

“Not only are we known well locally, but other shops in the area refer their customers to us when it comes to transmission work,” he says. “We are right on the edge of Hot Springs and there’s Hot Springs village. There’s Arkadelphia, Mena, Benton, Little Rock—we get work from a lot of the surrounding areas from us as well. We had one vehicle here, a Camaro from El Dorado, brought to us just because of a referral. And that’s several hours away from us.” (Editor’s note: two hours and 30 minutes, to be exact).

“Hot Springs is a tourist area,” he goes on. “So there’s a lot of tourism here and we have a lot of out of town people here. So we do get a lot of referrals just from locals and areas, other shops here. When people get in town on vacation and break down or have problems, we get a lot of work from that.

“But I would say our reputation is really what we pride ourselves on, and we try to treat everyone fairly,” he concludes. ““Although there are many other quality transmission shops in Arkansas, I think anyone would be hard pressed to find another transmission shop with a history and reputation to match ours, and I take pride in upholding that for many years to come.”

Shop profile: Fryar's Transmission is keeping up the reputation

From the ground up: Dunn Transmissions trades on a long history and a strong reputation
Connect with us 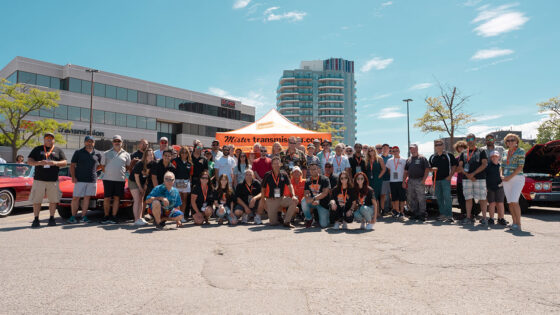