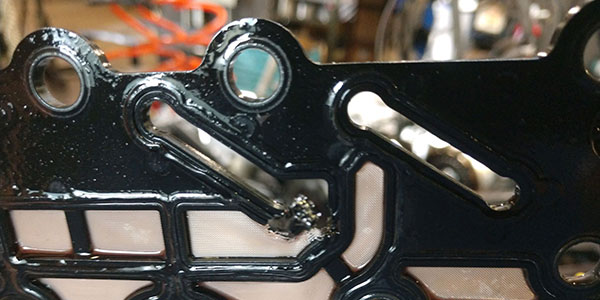 A 2011 1.8L Chevy Cruze showed up to the shop with a slipping generation one 6T40 transmission. Engagements were good, but on a quick initial road test it would flare to neutral when the 1-2 shift was commanded. Then it might drop in and hold second gear or shift to third gear and seem okay.  It was initially diagnosed as an internal 2-6 clutch problem, so the unit was pulled and disassembled. The unit appeared to be in good condition internally and no problem was found when the 2-6 clutch and piston were inspected.

The technicians decided to open the valve body for a closer inspection, with the idea being to replace the 2-6 solenoid (PCS-4) or TECHM if the valve body proved to be good. By doing this, they discovered the real problem: The filter plate was damaged as seen in figure 1 (above).

The way in which the plate was damaged allowed Actuator Feed pressure to intrude into the Pressure Switch 2 Circuit when it was not charged. Pressure Switch 2 is pressurized in first, third, fourth and fifth gears. This pressure would mix with and influence actuator feed pressure levels, but it was when the shift into second took place that pressure switch 2 circuit became open to an exhaust. This caused actuator feed pressure to drop, negatively influencing solenoid function. This became quite evident when the transmission transitioned from first into second gear.

Figure 2 (above) is a pick pointing to the actuator feed port in the filter plate, and right below that is the pressure switch 2 port. Subtle damage like this can go easily unnoticed. The chances of this exact same damage ever occurring again may be slim, but if your transmission has a sudden drop to neutral on a shift, remember to look at the filter plate.