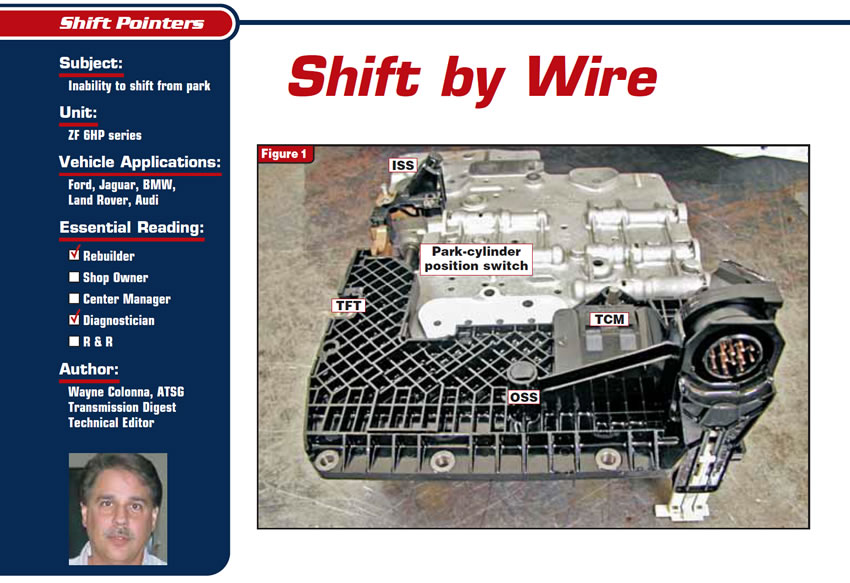 This article presents a situation that ATSG technical adviser Gerald Campbell handled regarding a ZF 6HP26 in a BMW with Reno Partipilo, Sal Scardina and Joe Russo from Continental Transmission in Bridgeview, Ill. But before we can cover it, we first need to present a bit of information that will help to make sense of the problem and what it was that corrected it.

This article presents a situation that ATSG technical adviser Gerald Campbell handled regarding a ZF 6HP26 in a BMW with Reno Partipilo, Sal Scardina and Joe Russo from Continental Transmission in Bridgeview, Ill. But before we can cover it, we first need to present a bit of information that will help to make sense of the problem and what it was that corrected it.

ZF 6HP transmissions are being used in the States in Ford, Jaguar, BMW, Land Rover and Audi vehicles. They come in different designs and torque-holding capacities that are identified, for example, by a 19, 26 or 32 suffix, and there are some two- and all-wheel-drive variations.

Electrically and hydraulically this gearbox is controlled by what is known as the “Mechatronic module.” This module is a combination of a TCM and valve body assembled as a unit (see Figure 1), and there are basically two versions of this module, called M and E. The difference is that the M version uses a conventional gearshift lever to select park, reverse, neutral and drive with the use of a manual valve, and the E version uses a shift-by-wire strategy with no manual valve.

Most BMW vehicles fitted with a 6HP transmission use the shift-by-wire strategy. Elimination of the conventional gearshift mechanism requires some safety enhancements associated with this type of system. One such example is that removing the ignition key automatically initiates a park engagement. Another is a hard-wire serial data link from the various styles of selector-lever input signals to the Mechatronic unit as a redundancy signal to the CAN bus input. Any errors will be reported and displayed either in the instrument cluster or via a scan tool. And there is the need for a mechanical emergency park release.

A pre-loaded barrel spring (see Figure 5) mounted on a rotating lever operates the parking rod, with the tension of the spring pushing the lever and rod into the park position. To release park, the MV3 and MV2 solenoids are energized.

The MV3 solenoid is mounted on the back side of a parking-lock cylinder. Inside the cylinder is a piston, the front of which connects to the rotating lever. When the MV3 solenoid is off, a shaft extends out from the solenoid, pushing the rear of the piston and lever into the park position. When a command is made to release park, the MV3 solenoid is energized and the shaft retracts. At this time the MV2 solenoid also is energized and supplies fluid pressure to a chamber inside the front area of the cylinder, which pushes the piston, rotating lever and parking rod into a released position (see Figure 6).

The bottom line is that there is no manual valve in this valve body. It is the TCM that engages and disengages park upon the request of the driver.
Figure 7 shows one example of a shift-by-wire shift lever, which has some features that resemble a typical shift lever. What will catch your attention quickly is that from top to bottom the lever will begin with the reverse position, symbolized by an upper-case R. P for Park is at the middle position, and D for drive follows below.

Position R: To select reverse the driver needs to depress the brake pedal and push the selector lever to its fullest travel in the up, or counterclockwise, direction.

Position N: If the driver desires neutral position while the transmission is in reverse, a simple downward tap of the shift lever is all that is needed. Likewise, from the drive position, a simple upward tap is all that is required. From the park position, a tap of the lever in either direction will place the vehicle in neutral. Neutral will be selected automatically when the ignition is turned off but the key remains in the cylinder. Park will be selected automatically after 30 minutes unless N is selected before the 30 minutes have elapsed, at which time an additional 30 minutes is added to the time in neutral.

Position D: Depress the brake and pull the selector lever to its fullest travel in the downward, or clockwise, direction.

Position P: Park engages by a push of a button built into the shift lever. Park automatically disengages when R, N or D is selected with the engine running. Park will engage automatically when the ignition key is removed from the cylinder.

Many safety features related to this shift-by-wire system will not be covered in this article, nor will you be tortured by another five-part series as I did with the DSG 02E transmission. But the safety measures taken are incredible. There is even a message-display window in the instrument cluster that will output messages informing the driver of a problem. For example, let’s say that the brake-switch signal malfunctions. A message that says “Gear engage without brake possible!” will be displayed to the driver, followed by a supplemental message saying: “Before engaging gear, press brake. When leaving the vehicle, switch off the engine. Accident Hazard! Please contact your BMW Retail Center as soon as possible.”
Now, back to the situation that inspired this article. The men at Continental Transmission had a 2002 745Li brought to them on a flatbed. The message display read Trans Fault, and since it was such a new vehicle, their aftermarket scan tool was unable to retrieve codes.

This particular vehicle did not have a shift lever as explained in this article; rather, it had shift paddles in the steering wheel that accomplished the same task. When they started the vehicle they operated the paddles to select drive. They saw the indicator lights go from park, to neutral and drive and then immediately back to park. They then obtained authorization to remove and inspect the transmission. The only problem they found was a defective bridge seal between the Mechatronic (valve body) assembly and the pump (see figures 8 and 9). Replacing this $7 part solved the problem.

With this bridge seal being compromised, a loss of system fluid pressure occurred. When the transmission was placed into gear the clutches could not apply fully. The TCM recognized this as the input-shaft-speed sensor maintaining a reading when it should have gone to 0 rpm with an engagement and the brakes applied. Consequently, the TCM placed the transmission back into park to prevent any further damage to the transmission.

By the way, should one of these vehicles get stuck in park like this and you need to tow or move it, there is an emergency park-release lever under the dash. The handle is behind a locked access door, as you can see in Figure 10. The ignition key will unlock this access door so you can pull on the bi-directional Bowden cable. This cable connects to the external linkage that could be mistaken for a manual-valve linkage. You can see a little of the external linkage in Figure 5 showing the preloaded barrel spring on the inside of the linkage. This cable is to be used as a mechanical emergency release of the parking-lock system should it not be able to release automatically. There could be several reasons for this, such as a battery failure, inability of the engine to start, or a problem with the engine’s or transmission’s electrical system.

Many thanks to the good folks at Continental Transmission for the feedback and for sending us the bad bridge seal that caused this unique and interesting problem with the Mechatronic E version of the 6HP26 transmission.