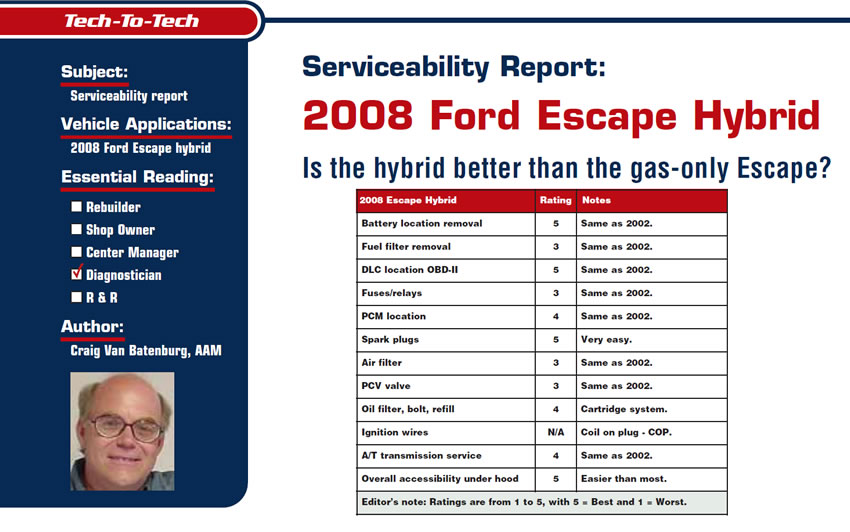 Is the hybrid better than the gas-only Escape?

While I was in Portland, Ore., last fall, I rented a 2008 Ford Escape hybrid. I own a 2005 Escape hybrid, so although the 2008 model was not entirely new, it was “refreshed.” I found that the improvements make this sport/utility vehicle (SUV) a keeper.

Most of you have probably not worked on a hybrid Ford. Is it easier to service a gas-only Escape or a hybrid? Let’s find out.

One look under the hood of a 2008 Escape V-6 shows a 3.0 power plant that has been a great engine for many years. When a hybrid version was proposed back in 2000 or so, the advertising said the hybrid model has the power of a V-6 with the economy of a small four-cylinder. Let’s compare a V-6 2002 Escape with a hybrid 2008 model.

The hybrid is a fuel-efficient vehicle rated as a super-ultra-low-emissions vehicle (SULEV) and very high-tech. Most dealership technicians who work on the hybrid models are not keen on them. I hear comments like “Flat-rate pay is not enough for the time I spend being safe,” “The new scan tool takes too long to operate” and “I am a truck guy, not a greenie.”

On Sept. 27, 2004, the Escape hybrid went on sale at dealerships that had a Ford-certified hybrid technician. Not all dealerships did. Many Ford dealership sales people personally did not embrace this new-fangled gas/electric SUV. Ford was the first to enter the SUV market with a hybrid.

A man I know from India bought a large Ford SUV that got not much more than 10 mpg in the city. We chatted at a social event, and when we got around to talking about what we did for a living he was very interested in picking my brain about what I thought of Ford hybrids. I offered my two cents’ worth and after he admitted he had recently bought an Exposition, I proceeded to lay out my argument for an Escape hybrid. A few weeks later we met up again and, lo and behold, he had traded in his gas guzzler for a hybrid – a Toyota Highlander hybrid that had just hit the showrooms.

I asked him why he chose a Toyota, because I knew he loved his Ford and the Toyota was $10,000 more than an Escape hybrid. He explained that when he went back to his dealership with the intent of trading in his gas guzzler for a hybrid, he asked the salesman to show him the Escape and the salesman said, “Hybrids are for sissies.” The local Toyota sales staff knew better, but the local Ford salesman lost a sale and a great customer for life.

This macho attitude exists in the bays as well, but to a somewhat lesser degree. Was it that the sales incentive was so little it was not worth selling? Do hybrids emote a feeling of guilt to a certain group of people? Whatever it is, I wonder if Ford might have used its Mazda outlets instead of Ford with better results. Mazda means fuel economy. Recently, Ford has done a much better job at marketing its hybrid.

What in the way of normal servicing is different between the two? There are two cooling systems to service and diagnose, and 12-volt starters are non-existent on the hybrid model. Charging systems are vastly different, and testing methods are not the same. If you are trying to get a no-start back on the road, a V-6 will allow you to crank it as many times as the starter and a high-amp charger can withstand. The hybrid has a ticking clock as the high-voltage battery pack slowly loses its charge. The climate-control system is as much about cooling passengers as it is nickel-metal-hydride (NiMH) cells. Braking systems on the V-6 are normal, but on the hybrid they are potentially hazardous to your safety while you’re doing normal brake service. We haven’t even mentioned the bright-orange-colored stuff. And the list goes on.

Hybrid service is easy after a few safety lessons and some tricks are learned, like changing the brake pads. It looks easy, but the first time can be frustrating when everything you thought you knew is out to challenge your common sense.

Five recalls have been issued. Problems include the fact that the accelerator cable may prevent the throttle from returning to the idle position. High idles are bad. Recall No. 1: During deceleration the engine can stall, and unless it is a hybrid it is also bad. Recall No. 2: Cardone-built master cylinders with date codes lower than dca7078 sold as replacement equipment for use on the vehicles have seals that can fail and leak brake fluid. Not good. Recall No. 3: On Escapes equipped with antilock brakes (ABS), the ABS-module connector may have missing or dislodged wire seals. This condition could allow contaminants to enter the module connector, creating a potential for an electrical short. An electrical short might cause an ABS malfunction that would illuminate the ABS warning light. In some cases, the module may overheat – resulting in burning odor, smoke and/or fire – and this condition could occur either when the vehicle ignition switch is in the off position or while the vehicle is being operated. Very bad. Recall No. 4: Tailgates are supposed to stay shut when the vehicle is hit in the rear. Recall No. 5: New latch rod.

Servicing the V-6 has its own quirks, such as replacing the rear spark plugs by removing the top of the plenum or getting some swivels, adapters and working like an escape artist (no pun intended). How about swapping out an alternator that requires the removal of the right axle? Other than the usual tricks of the trade, this model is pretty good in most other areas.

I sat down with David Sarkisian, a 15-year veteran of two Ford dealerships, and asked about the new 2008 Escape hybrid. He is the specialist at a large Ford dealership, and after his hybrid training things have been going pretty smoothly. He is quick to point out that the technician who has not been trained should stay away from the brakes and all hybrid service and repair. When the Escape hybrid first came out, any problems were addressed with new parts. Now, more than three years later, two problems have occurred that require the disassembly of the high-voltage (HV) battery pack and constantly variable transmission (CVT). A new harness is added inside the HV NiMH battery case, and the traction-control module is now replaced as a separate part instead of the entire CVT.

The new IDS scan tool is working out OK and is used on 1995 and newer Fords, with the WDS and NGS scan tools filling in on the older models.

Overall, the newer hybrid design is better than a V-6 model. It is easier because it has only four cylinders, so by itself it’s more accessible. Ford is getting a lot right these days, and certainly hybrids are in demand.

Craig Van Batenburg, AAM, is the owner of the Automotive Career Development Center (ACDC), www.autocareers.org, and delivers management and technical seminars nationwide. He formerly owned Van Batenburg’s Garage Inc. in Worcester, Mass., for more than 25 years. Van Batenburg is ASE master and L1 certified, with advanced skills in hybrid drive systems. You can reach him by e-mail at [email protected]

The copyrighted article featured above is reprinted with the permission of AutoInc., the official publication of the Automotive Service Association (ASA). To learn more about ASA and its commitment to independent automotive-service and repair professionals, visit www.ASAshop.org or call 800-272-7467.

The complaint After overhaul, a GM vehicle equipped with the 6T40 BAS Hybrid transmission has a complaint of little or no movement. A line pressure check reveals extremely low pressure. The technician disconnected the transmission case connector to see what effect that would have on line pressure, but it was negligible. Related Articles – FCA