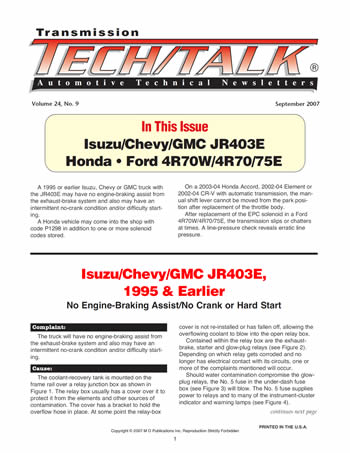 The truck will have no engine-braking assist from the exhaust-brake system and also may have an intermittent no-crank condition and/or difficulty starting.

The coolant-recovery tank is mounted on the frame rail over a relay junction box as shown in Figure 1. The relay box usually has a cover over it to protect it from the elements and other sources of contamination. The cover has a bracket to hold the overflow hose in place. At some point the relay-box cover is not re-installed or has fallen off, allowing the overflowing coolant to blow into the open relay box.

Contained within the relay box are the exhaust-brake, starter and glow-plug relays (see Figure 2). Depending on which relay gets corroded and no longer has electrical contact with its circuits, one or more of the complaints mentioned will occur.

Should water contamination compromise the glow-plug relays, the No. 5 fuse in the under-dash fuse box (see Figure 3) will blow.

The No. 5 fuse supplies power to relays and to many of the instrument-cluster indicator and warning lamps (see Figure 4).

Once the damaged relays are replaced and electrical integrity is restored, some attempt should be made to protect the relay box from future contamination.

About the middle of the 1995 model year this relay box was moved to the outside rear of the cab. It is vital that the relay-box cover be in place, as there would be nothing to protect the relays from inclement weather.

Relays and relay-box components are available from RC Truck Parts at www.rc-truckparts.com or 305-863-3933.

The ELD, in the underhood fuse box (see Figure 5), has failed, allowing the alternator to overcharge. This causes high system voltage and results in false solenoid codes being stored.

Note: These complaints also can be caused by failure of the #15 fuse on earlier models or the #4 fuse on later models, both of which are in the underdash fuse box.

The #15 fuse usually blows on Civics because of a wire harness under the intake manifold rubbing through the insulation and causing a short to ground. When this fuse blows, the transmission will be stuck in 4th gear, the ELD will not have power and the speedometer will be inoperative.

You could easily misdiagnose the ELD failure if you don’t know how it operates. The ELD limits the amount of alternator output voltage when it senses no electrical load. This puts less load on the engine at idle for emission-control purposes and provides better fuel economy on the highway. Under this “no load” condition a voltmeter across the battery may show open post voltage only (12.6V). Turn the headlights on, and now the voltmeter would indicate about 14.6V.

The transmission problems occur because of high-voltage conditions caused by high alternator output as a result of a failed ELD, which explains the P1298 code definition of ELD circuit high.

Always diagnose the P1298 code first. Start by verifying proper alternator output. The ELD connector, on the underside of the underhood fuse box, is a three-terminal arrangement that is shown in the wiring diagram in Figure 6. Terminal 1 is the battery-voltage supply for the ELD, which is fused by the #15 or #4 fuse that was discussed earlier. Terminal 2 is ground. Terminal 3 is ELD voltage output, which should drop with the headlights on.

You can buy the ELD separately for some models, but on others you must buy the entire underhood fuse box; check with your local Honda dealer.

This bulletin applies to 2003-04 Accords, 2002-04 Elements and 2002-04 CR-Vs with automatic transmission. The manual shift lever cannot be taken out of the park position (refer to Figure 7).

The only previous work done was replacement of the throttle body (refer to Figure 8).

Whenever the throttle body is replaced on these vehicles, the PCM needs to relearn the relative throttle position.

Before the PCM can relearn the relative throttle position you must check the throttle-position-sensor voltage with key on, engine off. With a voltmeter the idle TPS voltage should be 0.49 volt. The scan tool should indicate zero percentage of throttle opening at this voltage.

If the TPS voltage is greater than 0.49, make certain that the throttle and cruise-control cables are not out of adjustment.

If the voltage is correct but the percentage of throttle opening on the scan tool is higher than zero, reset the PCM adapts with a capable scan tool or a battery disconnect and “brain-dead” the PCM.

Caution: Make sure you have the radio anti-theft code before disconnecting the battery.

After replacement of the electronic pressure-control (EPC) solenoid, the transmission slips or chatters at times. A line-pressure check reveals erratic line pressure.

An incorrect EPC solenoid was installed. It did not match the solenoid retaining bracket.