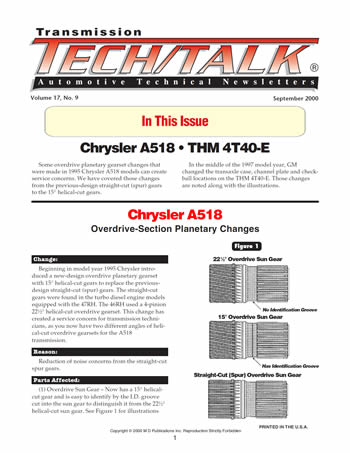 Some overdrive planetary gearset changes that were made in 1995 Chrysler A518 models can create service concerns. We have covered those changes from the previous-design straight-cut (spur) gears to the 15° helical-cut gears.

In the middle of the 1997 model year, GM changed the transaxle case, channel plate and check-ball locations on the THM 4T40-E. Those changes are noted along with the illustrations.

This change has created a service concern for transmission technicians, as you now have two different angles of helical-cut overdrive gearsets for the A518 transmission.

Reduction of noise concerns from the straight-cut spur gears.

(1) Overdrive Sun Gear – Now has a 15° helical-cut gear and is easy to identify by the I.D. groove cut into the sun gear to distinguish it from the 221⁄2°helical-cut sun gear. See Figure 1 for illustrations and identification of all three overdrive sun gears.

(2) Overdrive Internal Ring Gear – Now has a 15°helical-cut gear and is easy to identify by the I.D. groove cut into the ring gear to distinguish it from the 221⁄2° helical-cut ring gear. See Figure 2 for illustrations and identification of all three overdrive internal ring gears.

(3) Overdrive Planetary Carrier – Now has 15° helical-cut pinion gears, and the 221⁄2° helical-cut gears also are still used. There are no identification marks on the carriers to distinguish between the two, but they will not assemble if the wrong components are used. See Figure 3 for illustration of the 4-pinion carriers.

See Figure 4 for illustration of the 5-pinion straight-cut (spur) gear. It is easy to identify because of the straight-cut gears.

See Figure 5 for illustration of the 5-pinion, 15°helical-cut pinion gears that were used to replace the straight-cut design to reduce noise in the unit. The 5-pinion, 15° helical-cut planetary must be used in the turbo diesel and the V-10 models.

The new-design 5-pinion, 15° helical-cut over-drive carrier will replace the straight-cut design when used the 15° sun gear and the 15° internal ring gear and is highly recommended. The 5-pinion design must be used in the turbo diesel and the V-10 models and is recommended for any heavy-duty application.

The 4-pinion, 221⁄2° helical-cut setup is used in the 46RH models but could be upgraded to the 5-pinion, 15° setup for heavy-duty applications as necessary.

Beginning in the middle of the 1997 model year, the transaxle case, channel plate and the checkball locations were changed on all THM 4T40-E transaxles, which may create some confusion for service.

(1) Transaxle Case – Added boss and the second threaded hole to the case, in the area shown in Figure 6, to accommodate valve-body bolt and channel-plate changes for improved clamping.

The previous-design case with the single boss and hole is shown in Figure 7.

(3) Checkball Locations – The number 6 checkball moved from the direct-clutch apply circuit and into the 2-3 accumulator circuit. There were no changes in worm track configuration; however, we also show the threaded hole that changed to a non-threaded hole in the channel plate. See Figure 10 for 1995-1996 checkball locations, and Figure 11 for the 1997-up checkball locations.

(4) Spacer Plate – The number 45 exhaust passage in the spacer plate has changed from a rectangular hole to a small oval hole, as shown in Figure 12.

(5) Driven Sprocket Support – Ball capsule added in the direct-clutch circuit to act as an air bleed to improve direct-clutch apply, as shown in Figure 13.

Variations in the bellhousings are shown in Figures 14, 15 and 16.

None of the parts listed will inter-change with previous-design-level transaxles. Any transaxle using the ball capsule in the direct-clutch circuit must use the 1997 channel plate and all associated parts listed.