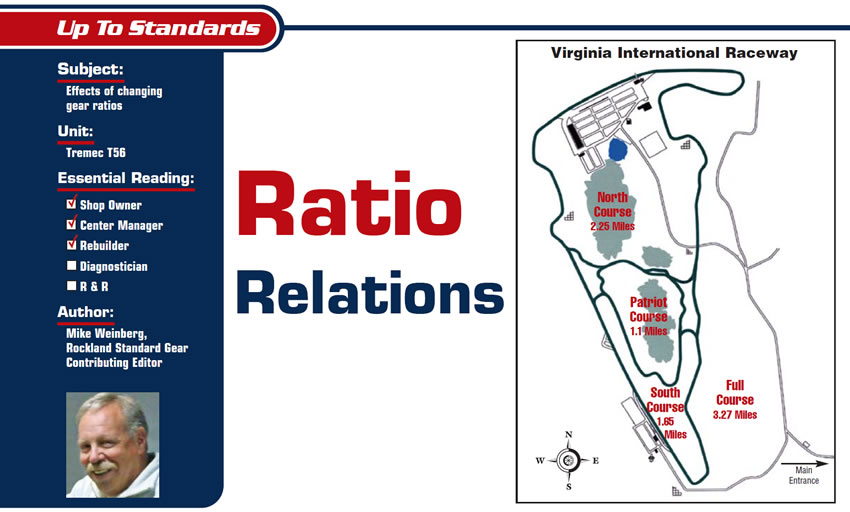 What is little understood by the public is how much work goes into developing a new race car. The platform of the stock GTO is modified to the maximum the rules allow. The car will compete at 2,800 pounds and has 260 linear feet of roll cage in it. A fuel cell, a modified LS6 engine equipped with Crane cams and producing 420 horsepower at the rear wheels, adjustable gas shocks, racing brakes, an Exedy racing clutch and a Tremec T56 six-speed transmission all work to make this car capable of 160-180 mph.

A transmission is a device that transmits power from an engine to the drive wheels of a vehicle in a usable form. Years back two- and three-speed transmissions were common, fuel was 20 cents a gallon and the corporate average fuel economy was somewhere around 8 miles per gallon. As fuel prices increased and emissions regulations were enacted, transmissions went to four, five, six and seven speeds – the idea being to keep the engine operating within its power band and to have the “steps” between gears to be as narrow as possible for the most seamless and efficient operation.

Besides writing articles for Transmission Digest and being heavily involved with the remanufacture and distribution of manual transmissions and transfer cases, I have for most of my life been professionally involved in racing. This year I am driving a Pontiac GTO in the Grand American Cup race series for the Spirit of Daytona Race Team. Grand American is the road-racing arm of NASCAR. The Grand Am Cup series is an endurance series with cars based on “showroom-stock” configuration. You could not buy one of these cars at a dealer, but the rules require using as many stock components as possible. Spirit of Daytona will sell one of these race-prepared cars for about $185,000.

The race team is owned by Troy and Todd Fliss and is based in Holly Hills, Fla., a village that is actually in Daytona. Troy was my crew chief when I raced the C5 Corvettes for three years and when we raced the Cadillac CTS-V in this same series. When he asked me to drive for this team I immediately agreed, because they are a top-flight professional team capable of winning races and championships. Our collective relationships with GM have brought us to this year’s Pontiac GTO, and our first race was in Daytona at the beginning of the year.

What is little understood by the public is how much work goes into developing a new race car. The platform of the stock GTO is modified to the maximum the rules allow. The car will compete at 2,800 pounds and has 260 linear feet of roll cage in it. A fuel cell, a modified LS6 engine equipped with Crane cams and producing 420 horsepower at the rear wheels, adjustable gas shocks, racing brakes, an Exedy racing clutch and a Tremec T56 six-speed transmission all work to make this car capable of 160-180 mph.

As I write this article, we’re preparing for our next race, April 22 at Virginia International Raceway, Alton, Va. This road course is 3.27 miles long with 18 turns and a variety of elevation changes. As we are still developing the Pontiac GTO to make it as fast and durable as possible, I thought it might be interesting for you to view one piece of the puzzle, which is gear-ratio development for the Tremec T56 transmission. The rules state that we may use only transmissions with stock ratios or that are produced by the manufacturer and available to everyone for purchase. The Tremec T56 is a six-speed manual transmission that is used in the Camaro, Firebird, C5 and C6 Corvettes, Dodge Viper, Ford Mustang, Cadillac CTS-V, Pontiac GTO and Aston Martin. The two available stock-ratio configurations for this transmission are listed here:

When we were developing the road-race version of the C5 Corvette, GM asked Tremec to build a specific close-ratio transmission for road racing. That unit had the following ratios:

These are the three ratio configurations that the rules allow us to use in the Spirit of Daytona GTO. As you can see there is a pretty large difference between the steps of the gears. What this translates into is how much engine speed you will lose during a shift and how long it takes to get the engine back to the power band after the shift is completed.

Remember that every engine has both torque and horsepower curves. The ultimate performance is achieved when we can keep the engine making maximum power and maximum torque for the longest period of time. These curves are not parallel.

This LS6 engine is capable of 7,000 rpm, with the rev limiter set to 6,500 rpm. The engine will produce maximum torque in the range of 5,000-6,000 rpm, and we probably will use a 6,200-rpm shift point for maximum fuel economy. When you consider that we will make about 12 shifts per lap, it is easy to see how much time we can lose on each lap if we don’t use the optimum ratios for this track.

To do this with a minimum of effort we will chart the ratio performance on a laptop computer. The program we will use is called Quick Shift and is available online from www.ed-it.com at very reasonable prices. This is definitely a program that will save you a lot of R&R labor and help you to see in graph form the results of any changes you might make on a customer’s vehicle.

For instance, if a customer asks you to change the differential ratio on his pickup truck to help him save on fuel, you could quickly graph what he has now and what the results would be with a new ratio. The information you need is the transmission gear ratios, the differential ratio, the engine speed used and the tire diameter on the vehicle.

What we will do now is to map out the differences in overall performance using the three available ratio configurations for the GTO. We have a 3.46-1 differential ratio, a 25-inch tire diameter, redline of 7,000 rpm and a rev limiter set at 6,500 rpm. See the attached graphs for each of the three ratio configurations we can use.

Looking at the results of our graphing program, we are now able to review which will work to our advantage. The first-gear numbers are not relevant, as first gear will be used only for leaving the pits; there are no first-gear turns on this track. Sixth gear is also useless, as we do not have enough horsepower to use it. This race will be driven in four gears: second through fifth.

One other option is to change the differential ratio, and we may have to recalculate all the data if that makes an improvement. The beauty of a computer program like Quick Shift is that you can see your options with a few clicks and five minutes of your time.

Now this information will go to the engineer in charge of engine management, who will make fuel calculations to further narrow which gearbox will be best for performance and pit-stop strategies. As this is an endurance series with the shortest race being three hours, the rules mandate two drivers in the race. Depending on how the cautions happen, we have to make one stop under the rules. We can change drivers, replace four tires and fuel the car in 46 seconds. This does not account for the time it takes to get into and leave the pits with a 45-mph pit-lane speed limit. A fuel load is good for about an hour and 20 minutes under green-flag conditions. You never want to stop under green, as it is too easy to go down a lap; this race will be a two-stop event if all other things work correctly.

Fuel prices are high, and the economy is under a lot of pressure. There are few conditions, good or bad, that do not provide opportunities for making more money. With a simple computer program and some innovative thinking you can come up with a variety of options to offer your customers to increase their performance or fuel economy. Every cloud has a silver lining.

Advertisement
In this article:gear ratios, Tremec T56, Up To Standards