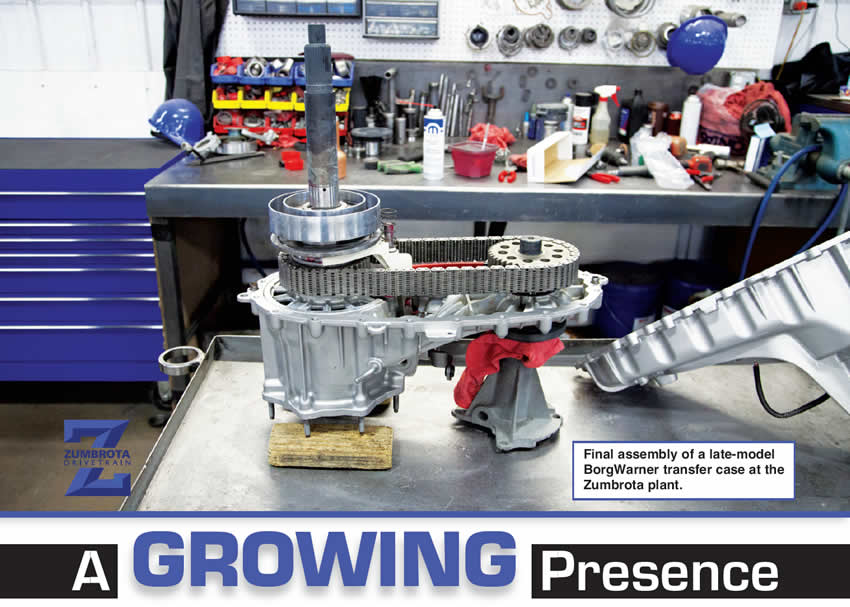 “Over time, Randy [Lyman] built our company to have many different brands,” says RANDYS Worldwide Automotive Marketing Director Neal Hollingsworth. The company, formerly known as Randy’s Ring & Pinion (Transmission Digest December ’09) is headquartered in Everett, Wash., and employs a total of over 200 people in seven different states including distribution centers.

“Over time, Randy [Lyman] built our company to have many different brands,” says RANDYS Worldwide Automotive Marketing Director Neal Hollingsworth. The company, formerly known as Randy’s Ring & Pinion (Transmission Digest December ’09) is headquartered in Everett, Wash., and employs a total of over 200 people in seven different states including distribution centers.

Founded in 1984 by Lyman, Randy’s was acquired in 2015 by the Linsalata Capital Partners headquartered in suburban Cleveland. Linsalata at one time owned Transtar Industries after the founder of that company sold to the capital firm headed by Frank Linsalata.

“Yukon Gear & Axle,” Hollingsworth continues, “is a line of the highest quality aftermarket differential components marketed and widely accepted by installers as a leader in performance brands. Those installers tell us they prefer the premium Yukon brand to less expensive options because it sets up correctly and ‘I’ll never hear from the customer again,’ that is to say it works and won’t be back because an axle or a locker unit broke.

“Secondly, we go to market with the USA Standard Gear Brand, a line of OE replacement components that will be competitive with all the other brands in the marketplace from the standpoint of quality and value.

“From a 2014 jumping off point, when Randy left the company, we were looking for growth opportunities. To really get a bead on how we wanted to grow we looked back at where and what we’d been. We are known for quality differentials technical knowledge, selection and distribution and are very successful in what we do. There were many opportunities to stay in our wheelhouse, – maintaining our market position in undercar was the place.

“Our CEO, Kevin Kaestner, started looking into driveshafts as a growth opportunity, and found that marketplace to be extremely regionalized. Although most shops have a local supplier, the opportunity for RANDYS to catalog and provide replacement, perfect fit, driveshafts has become a reality.

“That said, we’ve been able to create a driveshaft business on the OE side that is exactly what it needs to be: it’s cataloged, it’s cost-competitive and it’s in a box ready to go. While it’s taken us about two years to get that up and running, today we’re very excited about the success and the potential of the program.

“With that being accomplished, it was time to take another step. Keeping with our goals to become axle-to-axle we began thinking about adding transfer case and transmission. We had, at that time, an ongoing business relationship with Zumbrota Bearing and Gear. Zumbrota’s Mark Mangan was a customer of ours and, through that relationship, we opened up communications resulting in the acquisition that was completed in 2017.

“Zumbrota produces the most comprehensive reman transfer case, manual transmission and complete axle units in the aftermarket. It’s similar to what Randys offers for the differential component business in that it’s one-stop shopping!

“Zumbrota’s proprietary cleaning methods allow these units to ship out looking brand new. This separates the brand and helps emphasize the craftmanship that is included on the inside of the unit.

“Zumbrota had built a very solid reman around their Minnesota facility. Rebranded as Zumbrota Drivetrain, our intention is to take their reman expertise and to pair it up with our nationwide marketing and distribution capabilities.”

“It’s a diverse and different business model,” explains Kevin Shakeshaft who splits Zumbrota general manager tasks with Adam Schuster. Zumbrota is located an hour south of Minneapolis and has been a regional supplier of remanufactured manual transmissions and transfer cases for many years.

“Manual transmission has been a declining market overall for some time. We felt, however, that suppliers were leaving the industry more quickly than the business is declining which meant opportunity for those still in the industry. Our business is growing and it’s growing quite a bit.”

“In the past year, we expanded the Minnesota operation by purchasing a former bowling alley to house transfer case operations,” says Shakeshaft. “In doing so, we have created enough capacity so that we are now able to stock and distribute A and B movers there and feed those throughout the distribution network. If a customer needs a transfer case we can ship same day as opposed to the industry average that would be five to seven days.

“There are synergies available to the combined companies as well. As the remanufacturing operation discovers wear issues with the OEM designs, product development engineers at Randys can, and very often do create fixes that can then be manufactured as aftermarket new components that eliminate known OEM issues.”

Carl Schmidt is the engineering manager in the Everett, Wash., facility. He has been working on transfer-case issues with projects that include an improved OEM case half for the New Process 246 found in Chevy and GM.

“The pump wears into case so the fix we found was to replace the magnesium casting with an aluminum casting,” Schmidt explains. “It’s a little stronger material than the OE design but we also increased the amount of material in that crucial area to address the wear issue. We’ve been working on these kinds of transfer-case issues and fixes ever since we acquired the Zumbrota operation.”

Hollingsworth says, “the capability of our engineers is extremely critical to our aftermarket parts. We are not simply asking other companies to re-engineer our parts, but we’re doing that here for all of our brands. Once these parts move from engineering drawing to manufacturers, we continue these quality lines all the way through our labs and then on-the-street testing before these parts ever make to the public.”

Shakeshaft continues to discuss the aftermarket assemblies saying, “One of the things that Randys brought to the table, something that makes us stronger is a very organized marketing effort. Before we had a presence regionally and in the specialty industry. We didn’t do a lot of advertising and let word of mouth keep us in the game.

“Randys has given us a tried and true marketing program that has driven sales. It’s been exciting to watch that happen. We’ve created the Zumbrota Drivetrain brand around the products and it’s one that was created to be recognized. With the broader vision we’ve opened up a lot of doors beyond our traditional region and that’s really fueled our growth.

“With 30-plus builders we have continued to increase our volume and evolved from the original business. We were in some big-box stores, but we were not there nationally. It’s now expanded to the point that we have a good wholesale and reseller presence nationwide considering Randy’s national distribution presence. With the marketing expertise that comes from Randys, Zumbrota has the ability to grow system wide and further expanded to have greater national presence for our product lines.

“We go to market with our quality, our warranty, our brand and our ability to stand behind the product. Our sales reps handle our customers’ needs handling technical questions, warranty claims and anything else a customer might need from us. We’ve maintained that personal approach as we’ve grown our business.”

Hollingsworth considers the progress made since the Zumbrota purchase and observes, “It’s been a lot of work that was finished in a relatively short amount of time. The Zumbrota people are very good at what they do and as a very disciplined, technically savvy company, we’re all in this together.

Wrapping up the Everett facility portion of our visit, Hollingsworth points to a five-bay retail shop facility that’s part of the Randys Worldwide headquarters facility and explains, “We’re one of the best-known differential shops in the Pacific Northwest. You probably look at it as we’re doing retail repairs. We look at it differently. We see it as part of our overall QA effort. We are able to see, first-hand, what problems are developing with OE units. One further advantage is that as we bring people in to work, sales or customer service people or anywhere else in the company, they’ll spend a week working in the service shop to get an idea of what it is that our installation customers do.

“Bringing the growth of a good solid acquisition like Zumbrota absolutely maintained Randys under-the-car focus. We’ve been a one-stop supplier in differential units and components all along. Now, for the entire drivetrain, we’re that one-stop shop!”

Advertisement
In this article:Zumbrota Drivetrain