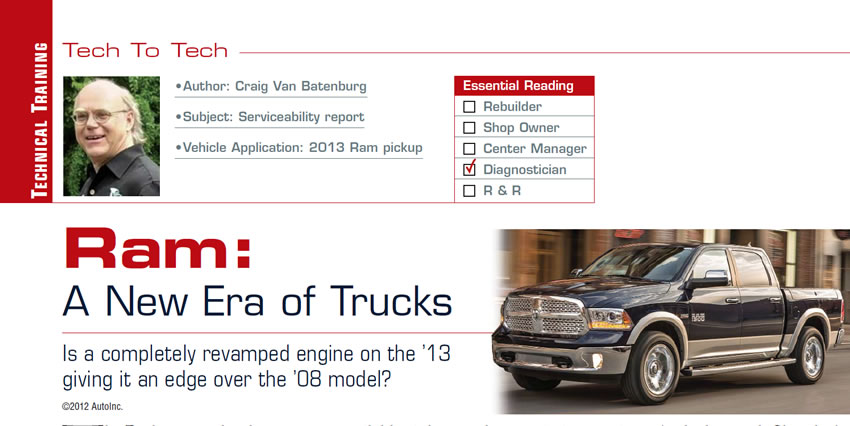 Is a completely revamped engine on the ’13 giving it an edge over the ’08 model?

The Dodge name has been around as long as any technician can remember. Chrysler Corp., as you know, was bailed out by the U.S. government and then a buyer was sought. When Sergio Marchionne, CEO of Fiat, made the best offer in 2008, Fiat was given the keys to Chrysler. The automaker was in the throes of a financial meltdown and Marchionne had already rescued the Italian automaker and turned it into one of the fastest-growing companies in the industry, so Fiat looked like it could save Chrysler.

The Dodge name was dropped and Ram is its own brand. The name Ram was first used in 1981 on the redesigned Ram and Power Ram, following the retirement and rebadging of the Dodge D Series pickup trucks as well as B-series vans. The truck is named for the Ram hood ornament that first appeared on Dodge vehicles in 1933. The Ram truck is in its fourth generation as of the 2009 model year. To meet the new required higher gas-mileage standards coming for full-sized trucks, the new Ram has been reworked in many ways.

Is the new Ram easier or more difficult to service?

The Ram was heavily upgraded for 2013 with a new V-6 engine, an available eight-speed transmission, fuel-economy-enhancing technology and an upgraded interior. I went to the 2012 New York auto show and saw for myself. Here is what was evident to me as I looked at the new truck.

From the outside, the 2013 did not look all that different from the 2012. Back then, the “Dodge” name was still on it as Chrysler had not yet created the Ram truck brand, and its biggest technological advancement was a coil-spring rear suspension instead of the more-common leaf-spring setup.

Although the majority of the 2013 1500’s changes lie beneath its sheet metal, Ram tweaked the truck’s styling for some freshness. The grille is taller and the front bumper is new. Plus, previously optional quad halogen headlights are now standard across the 1500 line, as are LED taillights. Also new is a headlight option that includes LED indicators and side markers. Inside the truck, you can now use a central-locking function from the doors to include the tailgate and Rambox bed compartments. Who said trucks are for tough guys? Trucks get easier to operate every model year.

The big news for the 2013 Ram surrounds fuel economy and includes some major powertrain revisions. At the low end, Chrysler’s Pentastar V-6 now handles base-engine duties for the 1500 SLT. (The ancient, 310-hp 4.7-liter SOHC V-8 is the base engine for the entry-level 1500 Tradesman; the V-6 is available as an option.) Compared with last year’s V-6, the new engine makes 90 more horsepower and 34 lb.-ft. of additional torque for new totals of 305 and 269. The Pentastar comes mated exclusively to an equally new, ZF-designed eight-speed automatic transmission Ram has dubbed the “TorqueFlite 8.” The 5.7-liter Hemi V-8 carries over for 2013 but nets an additional five horsepower for a new total of 395. Both V-8s hook up to a standard six-speed automatic, but the Hemi will receive a version of the eight-speed as an option sometime this year.

By using Aisin and ZF – both well-known transmission companies based in Japan and Germany – to supply the automatic transmissions (A/T) for the Ram lineup, the bad reputation that Dodge has with its older A/T systems may go away.

Ram is also rolling out several fuel-saving technologies. First up is an active grille shutter that automatically opens and closes, depending on the engine’s cooling needs and vehicle speed. A stop-start system that shuts down the engine when the truck comes to a stop will also be available, and Ram claims it improves fuel economy by up to one mpg in city driving.

For about $1,600, you could order air suspension. It has five ride-height settings: Normal, Aero, Off-Road 1, Off-Road 2 and Park. The Aero setting kicks in automatically at speed, lowering the truck 1.1 inches from Normal. Off-Road 1 raises the truck 1.2 inches, and Off-Road 2 brings a full 2-inch rise over the baseline Normal position. Park mode lowers the ride height 2 inches below Normal, giving occupants a lower step-in height and also providing easier access to the bed. Any of the five ride-height settings can be manually selected via dash-mounted buttons or the key fob from outside the vehicle. The air suspension also performs load leveling. Now the headlights won’t become searchlights when the truck is loaded with cargo or a trailer.

Other fuel-saving technologies that Ram will be making standard include electric power steering, a variable-speed engine-cooling fan, and lighter-weight chassis and body components. The 2013 Ram 1500 gets a revised frame that’s stronger and 30 pounds lighter, thanks to more-extensive use of high-strength steel. A new aluminum hood shaves 26 pounds, new cross-members in the box floor of the bed save seven pounds, and four pounds were removed from the front bumper. The front suspension uses lighter aluminum upper and lower control arms. The eight-speed automatic will come with a thermal-management system that heats the transmission fluid after engine startup, reducing parasitic losses from less-viscous cold transmission fluid. And this is only the beginning.

The 2008 truck received a host of structural, design and interior upgrades from the 2006 truck. There were many options, but each successive level brought more luxury and took the Ram from work-site truck to a luxury hauler. Three engines were offered in the Ram 1500 and were available no matter the trim level. Base trucks were powered by a V-6, a 4.7-liter V-8 or the top engine, the 5.7-liter Hemi V-8 with fuel- saving cylinder deactivation, known as Multi-Displacement System (MDS). The five-speed automatic was mandatory with the Hemi.

In 2008 the Dodge Ram had eight safety recalls, but none had to do with any original parts. The procurement of OEM replacement parts sold by Dodge dealerships was the problem. At that time, labor relations and parts suppliers to Dodge were at an all-time low. The brand suffered because of it. Identifix lists 68 technical-service bulletins (TSBs), many for re-flashing and electronics. Some electronic key-fob issues were problematic, as were A/T issues. Misfires, no-starts, MIL illuminated and other aliments were trouble enough to make special training required for those technicians who wanted to be up on the latest issues.

Of course, it is way too early to know how this model year will fare. One interesting note for 2013 from Chrysler Corp. LLC: “Engine coolant for the 2013 model year vehicles and beyond, for all engine applications EXCEPT the 2013 MK equipped with the 2.2L diesel engine and the JC vehicle equipped with the 2.0L diesel engine. This new coolant is an organic additive technology (OAT). OAT coolants have a service interval of 10 years or 150,000 miles. For heavy-duty truck and extreme duty cycle applications, refer to the service information or owner’s manual for proper maintenance schedules. Caution: Vehicle damage may occur if dissimilar coolants are mixed!”

Overall, the two years – 2008 vs. 2013 – were not very different from a technician standpoint. The people I spoke to at Ram were very pleased with what they have seen since Fiat got involved. The technicians liked the truck a lot and had few bad things to say. It is good to know that servicing a light-duty truck, with the right equipment, is not a bad way to spend one’s day at work.

For help with this article I was pleased to meet Brett Starbard, general manager of Harr Ram, less than a mile from my office. We sat down in his office on a snowy cold day in Worcester, Mass., and he had a wealth of knowledge and was a huge fan of what he sold. I also interviewed George Sotiropoulos, the owner and lead technician at Bravo Auto Service, also in Worcester. His repair shop is well known for truck service and as the local hybrid shop.

Craig Van Batenburg, AAM, is a master hybrid technician. He was the owner and lead technician for more than 25 years at his own shop that specialized in Honda and Toyota vehicles. Van Batenburg was the president of ASA-Massachusetts from 1993 to 1996. He is owner of the Automotive Career Development Center (ACDC), which he founded in 1998. He develops technical classes for those who require updating their knowledge in hybrid and electric cars. Some of his customers include the U.S. Army, U.S. Marines, Delphi, Midtronics, John Deere, Porsche of America and BG Products. You can reach Van Batenburg at [email protected].