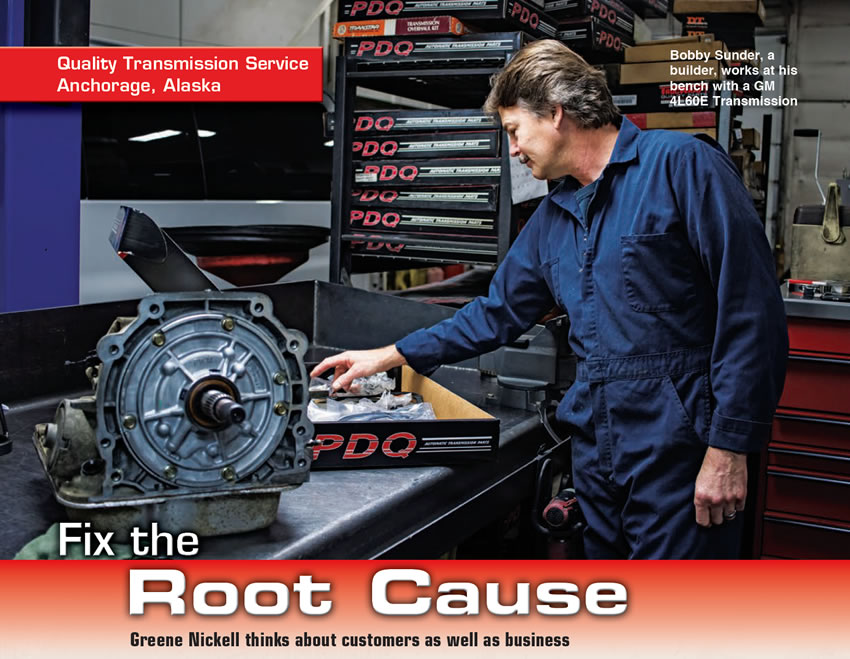 Greene also focused on business as well. Analyzing the Alaskan market, he mentioned two ways to expand his business. One way was to find ways to reach what he calls the “outer demographic” of motorists who can’t come to Anchorage; he must go to them. Another way is to take advertising seriously.

Greene Nickell thinks about customers as well as business

Greene Nickell always had a dream of starting a transmission shop, and it became a reality in 2005. After a rocky start with little money, the business gathered traction.

Two years in, he had no choice but to expand as the volume of work was piling up. Over the years, Quality Transmission Service continued to thrive. It now may be one of the biggest transmission shops in Alaska, if not the biggest, he suggested.

“We were getting to the point where we were having to tell people it’s going to be two-three weeks. We didn’t want to do that. We wanted to supply them with what they needed,” Greene said.

He seems to be thinking about customers as well as the business.

“Every time I look at a transmission that’s broken, I think, what caused the thing to fail. To do a good job for the customer we have to fix the root cause of the failure.”

Greene also focused on business as well. Analyzing the Alaskan market, he mentioned two ways to expand his business. One way was to find ways to reach what he calls the “outer demographic” of motorists who can’t come to Anchorage; he must go to them. Another way is to take advertising seriously.

Along the way, multiple developments gave the business several boosts. Greene and a partner, with whom he worked during the first two years, rented a building with more space than they needed. However, they leased half the building to a diesel technician, who sent his transmission work to Quality Transmission Service.

“That’s what probably saved our bacon. We had spent most of our money setting up the equipment,” Greene said. “It was make it or break it.” By the end of the first year, they hired an R&R technician.

“I ran the front. I had a build bench just outside the office door,” Greene said. “After that, I wouldn’t say it was smooth sailing, but we started having income and paid the bills.” After the second year, the diesel tech moved out, and Greene expanded into the entire building.

Another opportunity arose when a large wrecking yard went out of business, and the owner offered Greene all the transmissions as a reasonable cost – about 600 cores already pulled out. Greene added a large parts room. This transaction enabled the business to avoid out-of-pocket expenditures for hard parts. In addition, funds could be used to re-invest in the building and, in the fifth year of operation, buy the building. The business now has a second building.

While the company has been growing, Greene is looking into more business from outlying areas. For some customers, they can’t come to you; you have to go to them.

He has roughly 100 transmissions ready to sell to the “bush,” places that may not be accessible by roads. And the state has only two main highways.

“In Alaska, it’s a different market,” he said. “There are a bunch of people here, but there are no roads to them. They might be only 300 miles from Anchorage, but it’s only accessible by plane or barge. They have cars out there. So I’m trying to expand – businesses are getting more of that work from those communities by free delivery to the airport, quick turnaround.”

One of the goals is to get online purchasing as a way to attract business from the bush.

The customer base of the shop is a radius of 15 miles, the scope of Anchorage. However, the reach could easily be 500 miles in any direction, he said.

On another marketing note, Greene wants to compete with other shops for work on diesel trucks.

“I want to come up with a catchy name. That’s what they’re doing. There’s Monster Transmission. You wouldn’t believe how many people would call — I want to get one of those Monster Transmissions. Customers get caught up in the advertising part of it. At first I thought it was silly, but now I think it’s not silly. I need to come up with something: ‘You want a heavy-duty tranny? Alaska Grizzly.’ Something with an Alaska theme.”

The shop has seven bays with lifts and three more bays without lifts. The main building is 7,300 sq. ft.; a rental building is 5,800 sq. ft.

Quality Transmission Service works on transmissions and the full drive train, but no general repair.

With a lot of manual transmissions, a hydraulic press comes in handy. They work on typical pickups and diesels, but they also work on high-end cars: VW, Audi, BMW.

“Well, I’m pretty passionate about this business, and want to keep the business the way I want it. We do install a few remans, but only in rare conditions. If that’s what the customer wants, or we can’t get a hold of a core, but we try to rebuild everything we can.” That’s one kind of customer service.

Greene said he often ruminates about vehicles that come into the shop and how he might be able to fix the root cause of the problem.

“With an off-road vehicle, it might be overheating, maybe he’s overworking it. We do we have to do. I can sell the customer the Cadillac package and charge a lot of money. But I’m not going to the root cause that way. I think that’s a waste of their money. By figuring out what they need – tailoring a transmission in a package that’s going to be: a) a reasonable price, b) do what needs to be done, and c) not break the bank.”

This being Alaska, you won’t see many two-wheel-drive vehicles there, Greene said. In any case, terrain and climate take tolls on transmissions.

“The other thing is that Alaska is an extremely recreational state,” he said. “Everybody has a boat that we’re towing, a camper, or something they’re towing by their vehicle. That’s a use factor, too. It’s extremely mountainous around here. They’re pulling these campers and boats. They’re overheating the transmissions. … People go nuts in the summer. In the daylight, that’s a factor, too – 22 hours of sunlight, so they go nonstop doing these things. They go clamming on the beach with the truck, get it stuck in the sand, and burn the transmission out. That’s one scenario.

“There’s so much to talk about here.”