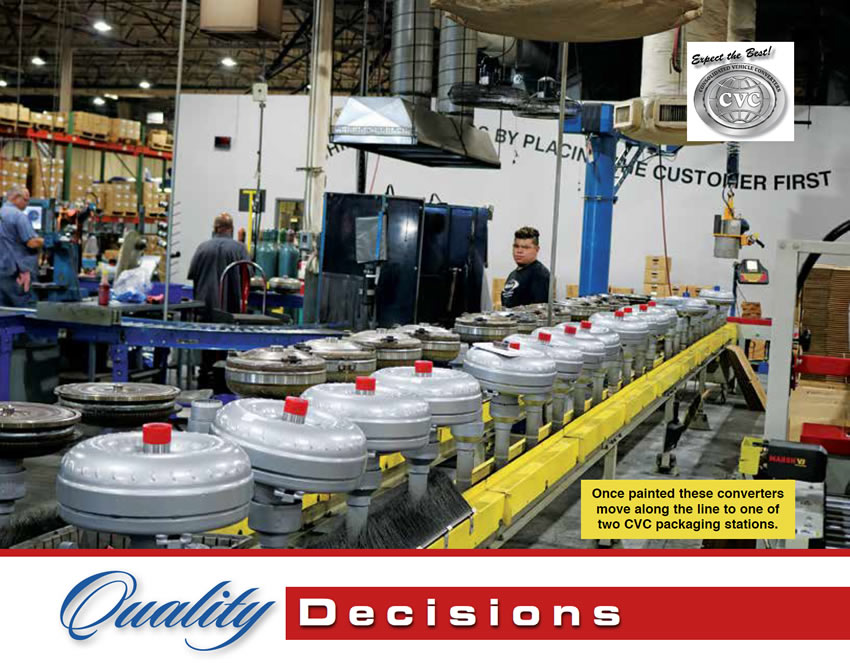 After entering the doors of Consolidated Vehicle Converters (CVC) you will quickly notice why every visitor has commented on the cleanliness and organizational skills of this remanufacturing facility which is phenomenal considering the dirty pieces of work they deal with every hour of every day.

After entering the doors of Consolidated Vehicle Converters (CVC) you will quickly notice why every visitor has commented on the cleanliness and organizational skills of this remanufacturing facility which is phenomenal considering the dirty pieces of work they deal with every hour of every day. General Manager Tim Prugh is accustomed to and proud of the fact every visitor comments on the cleanliness and best organized production facility of torque converters they have ever visited. “We think every impression, especially the first impression of our company should reflect the planning, pride and quality that we put into every product we sell, he says.”

“Up and down the lines, starting with the parting process, then various parts rebuilding processes and the final assembly process, inspection, painting and shipping, each step entails a series of quality decisions that must be made hundreds, in fact, thousands of times a day,” said Prugh. “My wife, Marcia, her sister, Julie Turner and their father, John Maynard guides the family and the production floor on a daily basis, John’s experience and work ethic is priceless.”

They are hands-on team that makes many quality product decisions while remanufacturing literally hundreds of torque converters every day.

Prugh explains that everything starts with and depends on core availability. He said that this is most important with new converters where an inventory of core parts hasn’t yet been built up. “We’ve been fortunate where late-model core is concerned. We seem to be locating our fair share. An example would be 68RFE units, if we are able to purchase a dozen cores, which seems like a sufficient amount, they will only last us about 3 days.

“I don’t think there’s necessarily a higher than expected failure rate with those units, there just aren’t any cores out there to be rebuilt at a time when the units themselves are just starting to show up for rebuilds.

Prugh went on to say that the majority of remanufacturing entails converters for use with either four-speed or six-speed transmission.

“The converters used in four-speeds, like the 300mm converter, continue to be in demand without any signs of dropping off yet. And, the performance converter we offer for the 4L65 transmission has seen a healthy growth in the past year. We have three approaches for those that include reworking the factory unit or a 10-inch custom build. We seem to be selling more and more of the street rod type of units.

“High Performance sales continue to be steady. The interesting thing we see about the street rodders is that they want to buy too much converter. The customer will ask for more converter than his engine modifications can handle and in that case the high-performance converter will really react like a low stall unit. When selling a converter to a street rod customer, it’s important to make sure that what he’s buying will match up with what is in the vehicle.

“Other interesting calls we get are related to high-end diesel units, We’ll get a call from somebody who wants to purchase a diesel triple-clutch unit. Then the guy wants to know how much that would cost. I’ll quote him a price.

“As for the six-speeds, customers tell us the GM 6L80 /90 are causing some techs issues. Technicians are telling us there aren’t a lot of technical references or tips available yet. The problems I hear are mostly not something that’s actually a converter problem, rather it’s pump and valve body related. We’ve done the torque converter rebuild right. When everybody does their job right, the unit works.

“We are getting a lot of requests for 6R80s, enough that we’ve converted an assembly line over for those. Ford brings on a special challenge because there are so many OE builds that are only a single part or two different from one another. For instance, we’ve found three different sets of damper springs that can be used in the converter for the same engine. I find that they’ve gone from a plastic thrust washer to a two-piece plastic and then to a one-piece fiber. And, I’ve seen a three-piece version of that part. Nothing else in the converter is changed except that part and the serial number.

“You can open up three units with the same serial number and there will be a slight difference in the OD or the ID of the friction paper or even the type of paper used. There are stator set-ups that are almost the same but there are variations in the bearing set ups, along with a high failure rate of these stators. It’s totally a challenge and a reason that I think many shops and production builders are going to depend on our expertise with these.

“We had similar experience last year with Mitsubishi units and were, after a lot of time evaluating able to consolidate a couple of our units to a single part number. We’re very reluctant to consolidate. I mean our assumption is that if there’s a difference in the parts then there must be a reason for that difference. Sometimes we find the difference is based on multiple parts suppliers to the OEs or something like that and then we can consider consolidating those into a single CVC unit. But, as I said, we’re very hesitant to consolidate we prefer caution over error.

“The 6L80 is unbelievably popular. We have a reliable source for those so we can build nearly up to the level of demand. The 8L90 units are just starting to hit the aftermarket. I think we still have some learning curve on those units before we find the trouble points. We bought a considerable amount of those cores in order for us to perform our research.

“As for the 10Ls and 10Rs we haven’t finished the specifications of all the components. They aren’t showing up and that’s a blessing for now. There is not much in the way of replacement parts for those units yet and we will have to do some tooling changes in the plant to produce those units.

“All late model units with captive clutches take additional time to build if it’s done right. So far we seem to be doing it right as we’re shipping those out and getting nothing back with any build or material problems.”

There’s A Lot Of Thought and Effort in the Plant

The work done in the plant, the actual remanufacturing is something that entails similar steps, processes and procedures regardless of which units are being worked on.
“Our remanufacturing starts with some precision processes,” says Julie Turner. “We have quite a bit of tooling involved in opening the cases. Every converter has a tool setup just to get it apart.

“Next it receives its first power washes before the various components head to the stator department or turbine department, pistons go to the clutch department depending on the type of unit. etc. Here, we’re tightening the fins or measuring the cover thickness or whatever needs to be evaluated for a particular converter component. And, everything is a ‘Go or No-Go’ decision where the part is brought up to specification or discarded.” Converters receive two more power washes before final assembly is performed.

Julie’s sister, Marcia adds, “Everything is inspected multiple times and brought up to our remanufacturing specifications before it is returned to the assembly lines. We may put rings on those units that don’t have enough lip to be put back together. All the splines are checked and, where necessary, replaced. On the 6L80 we discussed, we need to measure every front cover because we’ve found that we need to use much tighter tolerances than is common in the industry in order to cut out comebacks. If it isn’t to spec, we replace with a billet cover or we won’t sell it. This is a quality choice that we make. And, we make those choices and error on the side of quality for every converter we remanufacture.

“One of the biggest challenges we’ve had with training the end user relates to those billet covers. They are wear items and need to be replaced in order to assure a working converter. Some think we’re being too particular but the process is working.

Julie, Marcia and Tim said that as the company’s distribution to the transmission shops network changed over the past several months, it has been overwhelmingly complimentary and heart-warming to have so many loyal customers call to say they are looking for a new source of supply to get CVC converters. It’s good that we now have an answer to getting those onto their benches nearly everywhere.

“We have the United States covered again through Transtar Industries. Transmission rebuilders may call us here at CVC or visit our website: cvcconverters.com. On the website there’s a map with distributor information including phone numbers so that we can get that converter to the shop ASAP. And, that’s information we’ve included in our Transmission Digest ad in the July magazine.

“Beyond the transmission shops, we continue to develop business for performance applications. And, we are supplying a number of high-volume transmission production remanufacturers as well. It is the loyalty of so many customers combined with our passion for the industry that guides us every day. Our business scenery has changed. but our core business of ‘quality’ will never change.”