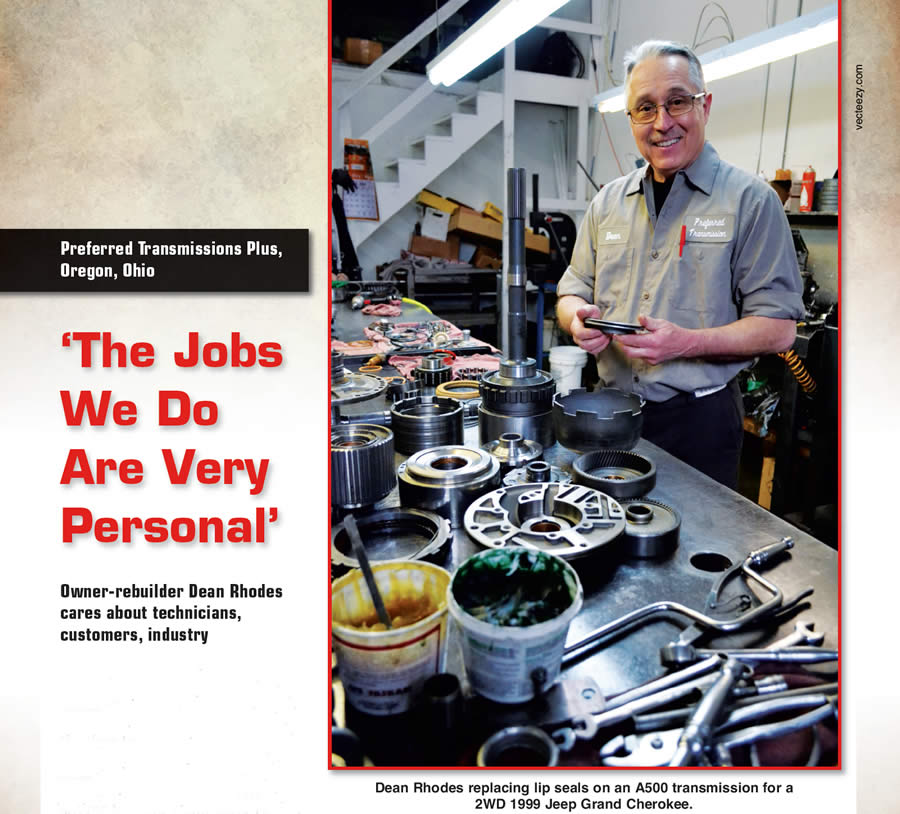 After more than a quarter-century of rebuilding, with self-awareness that this was the time to make the move, and with strong spousal encouragement, Dean Rhodes opened Preferred Transmissions Plus in 2011 in Oregon, Ohio, near Toledo.

‘The Jobs We Do Are Very Personal’

After more than a quarter-century of rebuilding, with self-awareness that this was the time to make the move, and with strong spousal encouragement, Dean Rhodes opened Preferred Transmissions Plus in 2011 in Oregon, Ohio, near Toledo.

He immediately had to shift his focus from doing work to finding customers. The transition came with some challenges.

“It was scary as hell,” Dean said.

“It was quite some time that I was walking around with my hands in my pockets. The phones didn’t ring. There was no business. I physically had to go out there and find work.”

If a job came in, he would take care of it. Otherwise, he put all his effort into drumming up business.

“I would forward the shop phone to my cell phone, and I would go out and make sales calls every day until I could get the phone to start ringing enough so I could afford to hire somebody.”

As the shop began to gain traction, he sought more business by widening his wholesale clientele. His background as a rebuilder became a handy selling point.

Dean’s approach is simple: “Basically, going out and presenting myself, selling myself. I pretty much know the inside of most transmissions. That helps tremendously to sell your product, sell yourself to a customer or a client. When you go out to generate business, you know what you’re talking about. You’re not just a salesman. If they (prospective customers) have questions, you can answer them intelligently because you know what’s inside of them.”

Dean said his success in building the business is due in part from a boost from his wife, Colette Baxter-Rhodes. “She was a huge inspirer of me getting my own shop. She believed in me, knew I could do it, and basically pushed me,” he said. Now Dean confronts the good problem of whether to expand or stay in this good place, businesswise, where he can control operations and manage quality.

Preferred Transmissions Plus is a full-service facility with the majority of the business in transmissions, mostly R&R and some bench jobs.

The shop began with one hoist; it now has four, including a bigger hoist for handling smaller dump trucks, smaller school buses, heavy-duty GM and Ford pickups, and some motor homes. Standard transmissions occasionally come into the shop, mainly pickups and cars, but also classic muscle cars.

Dean also works on vehicles that don’t roll on pavement. He has encountered agricultural transmissions, such farm tractors and a hay baler.

What’s more, he works on marine transmissions for boats that ply Lake Erie. The marine trannies Dean has worked on have two gears, forward and reverse.

“They’re not that big, but they’re extremely heavy – cast iron,” he said. The majority of boat transmissions he sees are Velvet Drive and Paragon, the two most common brands.

Fix it or scrap it

Preferred Transmissions Plus has a 40-mile radius where most of the customers reside.

“The jobs we do are very personal because I’m the one who’s doing it myself,” Dean said. “If I see a customer out at a grocery store or local hardware store, that’s my company they’re looking at. It has a direct impact on myself, my own personal feelings of what kind of work we’ve actually done on your vehicle.

Dean is a hands-on owner.

“I’m here every single day. I know what’s going on in my business. I’m part of the work. I wear a uniform just as my guys do, and I work hand-in-hand right alongside of them. It’s important to be a part of your business, not just an owner,” he said.

He’s also forthright about the condition of a customer’s vehicle.

“I try to talk to them about their vehicle like that vehicle was mine. Would I spend $2,000 on a transmission repair? If the vehicle is worth it, I would spend the money on it. If it’s not worth spending the money on it, I’d tell them so – in a nice way, of course.

“Customers rely on good honest mechanic or shop to point them in the right direction whether or not they should spend any money on their car or take it to the scrap yard,” he said.

“We strive to do an extremely good job at our shop. We have checkpoints. When an individual is done with the job, it’s our policy in the shop that the other technician goes over his work and makes sure everything’s correct. Anybody can make a mistake. We’re not here to point fingers. We’re here to make sure the job is done the best that we can do it. Occasionally we find errors, and we address them and correct them.”

Over time, the staff has reached a total of four people: Dean the rebuilder, technicians Chuck Ropp and Ian Fox, and Rob Rego in outside fleet sales.

“It’s hard to find good technicians. I’m very fortunate that I found some younger people who have an interest in transmissions. Our industry will die one of these days if we don’t find some younger men and women who want to learn this trade,” Dean said.

“It’s our responsibility as mentors to pass this information on so our trade won’t be just washed up on the shores. That’s what shops should be doing. … because this work is complicated, challenging, and very rewarding.”