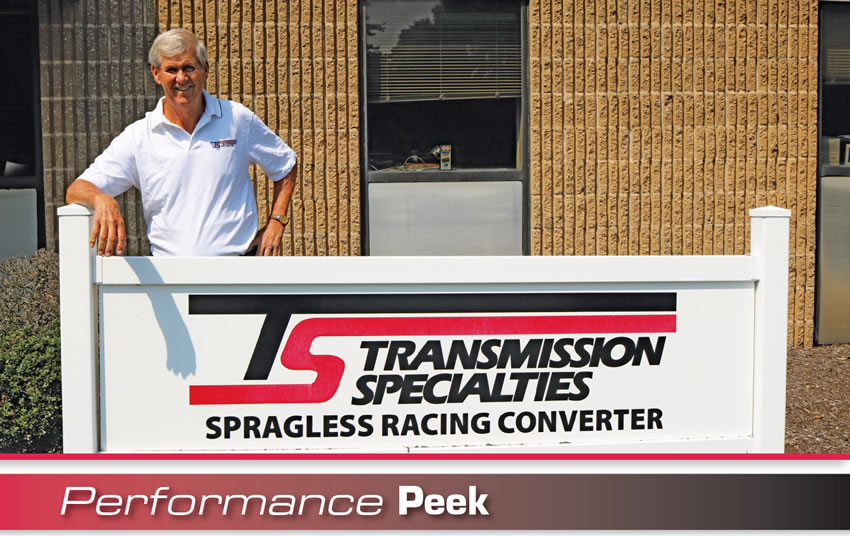 Transmission Specialties, General Manager Ken Kelly says, has an overriding philosophy that is a starting point for everything it does. “We like to be partners with our customers which is different than filling the role of supplier. As partners, when they grow, we grow. And, when we grow, by bringing them new products to sell, they grow.”

Transmission Specialties, General Manager Ken Kelly says, has an overriding philosophy that is a starting point for everything it does. “We like to be partners with our customers which is different than filling the role of supplier. As partners, when they grow, we grow. And, when we grow, by bringing them new products to sell, they grow.”

He and company President Peter Miller explain that the company has grown quite a bit by applying that philosophy to an ever-greater collection of performance oriented transmission and torque-converter units and parts.

Miller lays a blueprint of four categories in which the company plies its skills. “Traditional drag racing is primarily the over 40 market. That’s where we started and it’s the old standard. The need that we fill there is aftermarket parts for Powerglide and 400, finished transmissions and racing torque converters.

“Then we have the overdrives that are mostly the favorite of racers under 40. Of course, that’s a generalization but that’s how we see the market. The typical overdrive customer wants something he can drive on the street but that holds 1,200 horsepower. We continue to develop the transmission parts necessary for that segment. The nice thing about the 4L80 is that it uses all the parts we had developed for the Turbo 400. We’ve already made parts like the input shaft, pans and all that. We can serve anybody in the overdrive segment and have the parts they need. Our converter parts segment has manufactured overdrive converter parts for many years.

“We have a rapidly growing and emerging presence in the diesel performance segment of the industry as well. The diesel segment is the biggest growth area for us because we hadn’t been in that business before.”

“We were very fortunate,” Kelly adds, “to have had a foot in the door with the diesel business because of our torque converters and converter kits. It has grown to transmission parts that include drums and input shafts and more recently SFI-certified flex plates.

“And the final segment we have is private label parts for other companies that sell those parts as part of their product lines. That’s a growing business for us, a different role as we become a manufacturer for other suppliers. We’re growing there because, if we make a private label part, they aren’t going to find that we’re selling that part a year later to their competition. That’s important to them and to the trust that we develop with those customers. Our goal is to build a partnering relationship with those folks where both companies benefit and grow.

As a good partner, when someone approaches us with an idea they think we could manufacture for them, whether we take the project or not, we treat all the information we receive in strict confidence. That’s important to a guy who has a new way of addressing a problem. He wants to get that to market without everybody else knowing and copying his product before he can get it to his customers.”

Miller says that much of Transmission Specialties’ success comes from expanding the opportunities available to customers who either specialize in building transmissions or in building converters. If a guy is buying Transmission Specialty converter parts because he’s in the racing torque converter business, then he’s dealing with a customer, who at some point, needs a transmission as well. He doesn’t build the transmission, but we do, and so he can sell a nice package of our transmission along with the converter he builds from our parts. We tell those customers that if ever there’s a problem with the transmission it should come directly to us. We aren’t trying to take his customer, we’re going to be the support behind the product our customer sells.

“And, it’s the same way with a guy who builds a transmission using our parts. We say to this businessman, ‘why not offer one of our converters?’

“Now he has a package, the transmission and the torque converter, for his customer. The racer trusts his recommendations and the work he gets from our customer shops, and those shops can increase their profits by offering a package to that racer. Now, if you’re going to give him a transmission that can handle 1,500 HP, he’s going to need a 10” converter to match up there.

“It’s not that we don’t want the retail customer, but the majority of our business is to professional builders. We sell complete transmissions, complete converters, transmission parts and we sell converter parts and kits. At this point, the parts business is expanding most rapidly.”

Miller says that while the numbers aren’t available he’s confident that Transmission Specialties is the world’s largest supplier of high-performance transmission and torque converter parts. “

Kelly continues saying, “That includes converter parts and complete kits for street rod 4L60s, 4L80s, 350s and 400s to multi-plate diesel kits on up to full-blown drag racing applications from 300 to 3,000 HP.

“The core supply for every one of the units that are used for racing transmissions has run out or is soon going to run out,” explains Miller. “So we look at the market and figure when those cores are going to run out. It’s always less expensive to modify an OE core than it is to build a new one with an aftermarket case. We look ahead to develop a list of parts we’ll need to manufacture, in order to be the first, or nearly the first to have everything available and tested, at the point where demand for aftermarket new parts kicks in. That means timing is very important if you’re going to make those parts. We want to be a year ahead but not three years ahead of the market.”

“We’re typically one of the first to market with these components and those that are following will attempt to copy the products from the early suppliers,” adds Kelly.

Miller continues, “We’ve had a Powerglide valve body available for about three years now. There are no more Powerglide cores to pull those from and guys are needing parts for their drag racing and so there’s a demand we can fill.

“The 400 valve body has had a number of different changes. The cores have run out, so a lot of people have come up with different valve bodies. Aluminum is the preferred choice now. To be successful, our line offers a two-speed valve body and a three-speed valve body. There are a lot of other variations that the really high horsepower guys demand. We offer those but realize that’s not our core business.”

“We build a lot of stuff for guys who want to run even higher horsepowers but the majority of the product line is designed for that 1,800 or less application,” Kelly explains.

Miller says that the traditional drag racer units have come down to either the Powerglide or the Turbo 400. “If a guy is a Ford guy, he’ll take a Ford bell and attach it to either a Powerglide or a 400. Those two are popular enough – and will remain so – that it makes sense to manufacture an aftermarket case and all the internal components. Doing cases for anything else, at this point , seems unlikely as the demand couldn’t offset the developmental expenses.”

“We make a new aftermarket pump for the Turbo 400,” Kelly adds, “and we make a brand new valve body. We make the drum and all the hard parts that you need to build one. With our parts, you can build an all-new aftermarket version of the Turbo 400 at a very reasonable price.

“One of the problems the Industry has over and over, is constantly running out of product. It’s pretty complicated to forecast inventory levels and match that to the production plan, but we do a good job at that.”

Adds Miller, “Our inventory investment is substantial; it has to be. I don’t want to answer the phone and tell a guy who wants 50 of something that we can only ship 10 now and the rest in six weeks. And once again I say the challenge is to keep the inventory at just the right levels.

“That said, we’re very aware of controlling our costs so that the product will be affordable. We try to keep those costs as close as possible to what they would be for an OE part. The challenge is, if the cost goes too high, you’re going to lose the very customer you set out to satisfy.”

For example, Kelly explains, “There are companies that have developed a performance pump that they sell for $530. Ours is selling for $311 and if you could find a used OE pump somewhere on line, it sells for around $250. By the time a guy purchases the pump, a case and a valve body, it’s a very large investment for these guys. We attempt to make it affordable by selling 1,000 units as opposed to some of the companies that are making a much higher markup and are satisfied selling 10 or 20 units.”

“I look at the bracket racer who’s doing well right now because the economy is good,” Miller says. “But, when the economy isn’t so good, we still want those guys to be racing. Our products allow the builder to make a fair markup without pricing themselves out of the job. In a couple of years, everything’s going to need an aftermarket case and that adds $1,000-$1,500 to every transmission. Now that’s a one-time shot because they don’t break but that bracket racer still needs to come up with that $1,500 at some point.

“It’s that philosophy of creating a partnering relationship. When we give builders a product that they can sell profitably at a competitive price, they’re going to do well and, as a result, Transmission Specialties will continue to prosper.”