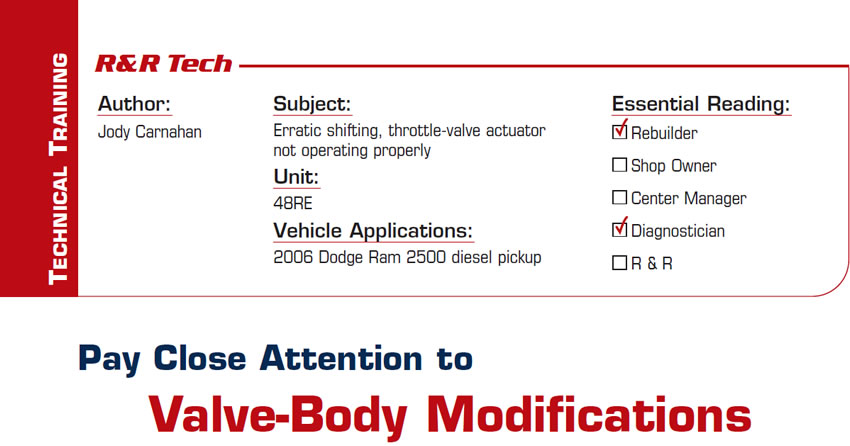 This particular call came in just like many others: The technician had already eliminated everything he could interpret as the possible root cause of the concern. The vehicle in question was a 2006 Dodge 2500 pickup with a 5.9-liter diesel and a 48RE transmission. The owner had bought the vehicle recently and had concerns that the transmission was not shifting properly.

As a warranty and technical director, I have the privilege of managing many technical-assistance calls. This privilege can have several benefits, as it allows me to research and learn about some of the issues technicians are experiencing in the field. It can also have its disadvantages, as I cannot see, feel or hear the problem at hand. All my diagnostic steps are based on the information that the technician who is diagnosing the vehicle provides to me.

This particular call came in just like many others: The technician had already eliminated everything he could interpret as the possible root cause of the concern. The vehicle in question was a 2006 Dodge 2500 pickup with a 5.9-liter diesel and a 48RE transmission. The owner had bought the vehicle recently and had concerns that the transmission was not shifting properly.

According to the technician, all the upshifts were erratic and the throttle-valve actuator was not responding as it should. At this point, the technician had decided that he needed to install a different actuator to correct the issue. I was somewhat skeptical as to whether this would fix the problem, because I had asked about any trouble codes being set. His answer was that there were no codes stored in the PCM. With the new actuator installed and the relearn for zero position performed by turning the ignition on with the engine off for 30 seconds, the vehicle was taken out for a road test. Well, that’s when the second call came in.

This did not cure the concern, and now the check engine light was on and there was a P1751 code, “TTVA Position Minimum Range Performance.” This was the first time I had had to deal with this code and assumed by the description “minimum range performance” that it was related to the relearn of zero position. The technician reassured me that this relearn had been performed – several times, in fact. He also told me that the parameter for the “TTVA minimum position” was always at 24° and would not change, per the scan-tool data. It was time to review my technical resources and find out what the cause of the code could be on the basis of the code description.

After I looked at the diagnostic trouble tree for the code, it appeared that something mechanical was causing the concern. We had likely ruled out the throttle-valve actuator as the cause, since it had just been replaced with a new part. The next step was to remove the actuator from the transmission to make sure the throttle lever was not binding and, at the same time, check the throttle-lever shaft for damage. Everything external to the unit appeared to be in good shape, and the throttle-valve shaft seemed to operate as designed.

I then had the technician bolt the actuator back onto the unit, making sure that it was mounted properly and that the actuator was engaging into the throttle shaft correctly. Everything checked out favorably at this point. After another initialization session to learn the “current zero” position and clear the code, we tried again. Unfortunately, the code returned immediately. Now that both of us were scratching our heads, we decided to remove the pan and inspect the internal throttle-valve linkage to make sure everything was in place. To our surprise, everything looked proper and was operating normally, so now what?

This is when the frustration level started to rise and the technician started to become a little impatient. I was feeling the same way, because I knew the problem had to be something simple. As I had said earlier, I could not see, feel or hear the problem. At this point with everything considered, I now had a frustrated technician and the vehicle owner wanting to know what was wrong with the transmission and what would be required to repair it.

We decided to replace the valve body. To my surprise this cured the issue, but I questioned what could have been wrong inside the valve body to have created this concern. I talked with the technician and asked him whether he would mind sending us the valve body so we could inspect it and possibly find the source of the problem.

We received the valve body a week later. Upon initial inspection, it was just as the technician had said: We could see no real problem with the throttle-valve shaft, and everything having to do with the internal throttle linkage appeared to be normal. We had the valve body sent over to our solenoid/valve-body department for analysis.

It was there that the cause was discovered. The technicians in this department occasionally find 48RE core valve bodies that have had a performance kit installed or have had some type of valve-body modification. What they discovered in this particular case was a modification of the throttle-valve plunger. As you can see in figures 1 and 2, the plunger had been ground down on the end where it contacts the arm from the throttle lever. The valve is actually 1/8 to 1/4 inch shorter than the OE valve. This would explain the code and also why the actuator-position minimum was at 24°. The actuator had to travel farther to get to a zero position, which was too far out of spec on the basis of the computer parameters for the minimum setting.

I’m also going to cover one other issue we are beginning to see more frequently, and it has to do with the actuator itself. In most instances the vehicle will come into your shop with slip concerns and may not move in either direction etc. You have determined that the transmission needs to come out for overhaul. Although you find burnt clutch packs, you may not find a root cause for the failure, such as a seal or valve-body problem etc.

The transmission is repaired and reinstalled, and on the initial road test it may slip under a load and/or slide through the shifts, acting as if it needs more throttle pressure. The cause could very well be damaged internal gears in the actuator. In most instances the PCM will recognize this problem and set a P1751 or P1753 code. Other codes associated with this problem are P1754 and P1755, which can be generated electrically or mechanically. In figures 3 and 4, you can see that the internal gears are plastic, and I have seen the gears damaged in various ways. Unfortunately, at the time of this writing, I did not have a damaged actuator to view and provide as an example.

In summary, when working on one of these units, and especially when it’s in a diesel application using the electronic throttle-valve actuator, pay close attention to any valve-body modifications.

Jody Carnahan, a warranty and technical director, has been with Certified Transmission for 23 years.