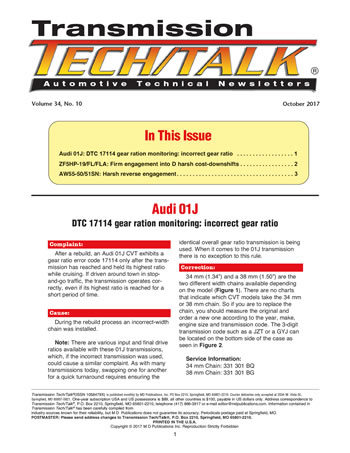 During the rebuild process an incorrect-width chain was installed.

Note: There are various input and final drive ratios available with these 01J transmissions, which, if the incorrect transmission was used, could cause a similar complaint. As with many transmissions today, swapping one for another for a quick turnaround requires ensuring the identical overall gear ratio transmission is being used. When it comes to the 01J transmission there is no exception to this rule.

There are no charts that indicate which CVT models take the 34 mm or 38 mm chain. So if you are to replace the chain, you should measure the original and order a new one according to the year, make, engine size and transmission code. The 3-digit transmission code such as a JZT or a GYJ can be located on the bottom side of the case as seen in Figure 2.

Audi or BMW vehicles equipped with the ZF5HP-19/FL/FLA may exhibit a condition of a firm engagement in the drive position accompanied with a harsh coast-downshift. This condition will typically get more pronounced when hot. This condition seems to be more prevalent in vehicles 2003 and newer.

The cause may be a mechanically malfunctioning EDS 1 solenoid. Refer to Figure 3 for a description on mechanical function.

Figure 4 shows a partial hydraulic schematic of the EDS 1 solenoid and how it controls the modulating pressure valve.

If the EDS 1 is malfunctioning it will cause high modulating valve pressure, which can cause high line pressure as well as high accumulator back pressure. This typically causes the firm engagement in drive and the harsh coast/downshifts.

To correct this condition, refer to Figure 5 for the location of EDS 1 solenoid and replace it.

Refer to Figure 6 for the location of the modulating pressure valve, as it would be a good idea to make sure that the valve moves free in its bore, while replacing EDS 1.

Direct (C2) friction plates were installed that were the incorrect thickness which made this clutch pack too tight. If the clutch clearance is too tight the gear train is already engaged when the selector lever is moved from park to reverse. This can cause reverse engagement to apply too quickly and can also be firm.