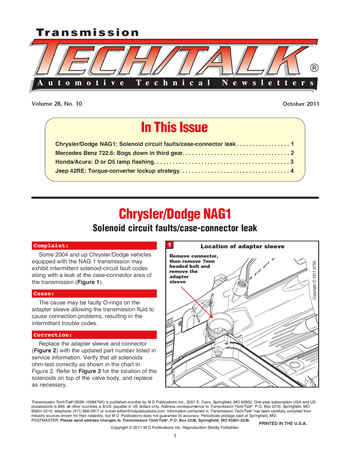 Some 2004 and up Chrysler/Dodge vehicles equipped with the NAG 1 transmission may exhibit intermittent solenoid-circuit fault codes along with a leak at the case-connector area of the transmission (Figure 1).

The cause may be faulty O-rings on the adapter sleeve allowing the transmission fluid to cause connection problems, resulting in the intermittent trouble codes.

Replace the adapter sleeve and connector (Figure 2) with the updated part number listed in service information. Verify that all solenoids ohm-test correctly as shown in the chart in Figure 2.

Refer to Figure 3 for the location of the solenoids on top of the valve body, and replace as necessary.

Note: This connector is also available individually at many aftermarket suppliers.

When the transmission was removed and disassembled, the technician found that the K2 friction plates had cut through the aluminum rear-carrier hub.

There are two different inside diameters for the K2 friction plates (Figure 4). The outside diameters and tooth configurations are the same for both, and both have 36 internal teeth.

There are two different diameters for the rear-carrier hubs to accommodate the difference in the K2 friction plates (Figure 5). These differences are dependent on engine size.

Ensure that there is a proper fit between the teeth of the K2 friction plate and the splines of the carrier hub.

The vehicle comes in with the D5 lamp flashing, but when the technician scans the PCM for codes he finds none. The vehicle may have symptoms indicating that there is a transmission problem and the technician knows that when the D5 Lamp is flashing there should be a code present.

Some aftermarket scan tools do not have the ability to display trouble codes under certain conditions.

Even though these vehicles are OBD-II compliant and five-digit codes should be present, in instances such as this flash codes can still be retrieved via a flashing D5 lamp.

The MIL lamp may be illuminated; if so, engine codes will always be displayed first.

Note: Some scan tools have the ability to put the PCM into SCS mode by grounding DLC terminal 9 through the scan tool. The scan tool will now display the two-digit trouble code as well as a third digit that indicates the nature of the failure (Figure 8), such as a circuit high or circuit low fault.

The chart in Figure 9 shows the conversion from the OBD-II codes to the SCS flash codes.

These vehicles were selectively reprogrammed with a converter-lockup strategy that will not allow lockup application until vehicle speed is greater than 48 mph (77 km/h) and the transmission is in fourth gear. When overdrive is canceled, lockup application will occur at a vehicle speed greater than 29 mph (47 km/h). The difference in engine speed when lockup is enabled is about 300 rpm.

There is no correction; this reflash was done to enhance vehicle performance (Figure 10).