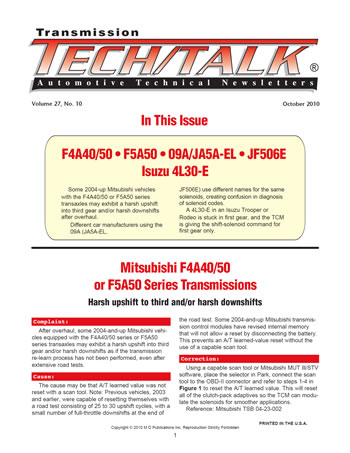 Some 2004-up Mitsubishi vehicles with the F4A40/50 or F5A50 series transaxles may exhibit a harsh upshift into third gear and/or harsh downshifts after overhaul.

Different car manufacturers using the 09A (JA5A-EL, JF506E) use different names for the same solenoids, creating confusion in diagnosis of solenoid codes.

A 4L30-E in an Isuzu Trooper or Rodeo is stuck in first gear, and the TCM is giving the shift-solenoid command for first gear only.

After overhaul, some 2004-and-up Mitsubishi vehicles equipped with the F4A40/50 series or F5A50 series transaxles may exhibit a harsh upshift into third gear and/or harsh downshifts as if the transmission re-learn process has not been performed, even after extensive road tests.

The cause may be that A/T learned value was not reset with a scan tool.

Note: Previous vehicles, 2003 and earlier, were capable of resetting themselves with a road test consisting of 25 to 30 upshift cycles, with a small number of full-throttle downshifts at the end of the road test. Some 2004-and-up Mitsubishi transmission control modules have revised internal memory that will not allow a reset by disconnecting the battery. This prevents an A/T learned-value reset without the use of a capable scan tool.

Using a capable scan tool or Mitsubishi MUT lll/STV software, place the selector in Park, connect the scan tool to the OBD-II connector and refer to steps 1-4 in Figure 1 to reset the A/T learned value. This will reset all of the clutch-pack adaptives so the TCM can modulate the solenoids for smoother applications.

When a Volkswagen equipped with an 09A (JF506E) is scanned for codes with a scan tool that displays VAG-style codes, code 00349 is displayed. The code definition that’s displayed reads, “Electrical Fault in Solenoid 10 Circuit.” With the scan-tool database enabled, a further explanation of code 00349 reads “Open Or Short, Solenoid Valve 10 – N283 Faulty.”

When consulting solenoid-location information, the technician notices that there are only nine solenoids in the transmission.

So how can there be a Solenoid 10 fault, and what does the N283 designation indicate?

With no information to explain the N283 designation coupled with the little-known fact that there is no #7 solenoid, the confusion as to which is solenoid 10 would be great.

Another cause for confusion is that this transmission is used by other vehicle manufacturers such as Land Rover, Mazda and Jaguar. A solenoid mounted in the same location may be called something entirely different and also have a completely different function.

The chart in Figure 2 illustrates the Volkswagen VAG code numbers as well as the solenoids’ numerical designations and the VAG solenoid designation. Notice that it is numbered one through six, skips number seven, then continues with eight through 10.

In figures 3 and 4 the charts indicate the codes and solenoid nomenclature for Jaguar and Land Rover.

The chart in Figure 5 shows the Mazda OBD-II codes and solenoid nomenclature.

Figures 6 and 7 show the actual location of the solenoids and the resistance values that you should see in the solenoid circuits.

A Trooper or Rodeo vehicle comes into the shop with a complaint of stuck in first gear. There may be no codes stored; however, the speedometer does function. Further diagnosis indicates that the shift-solenoid command given by the TCM is for first gear only.

In some instances the mode switch (P/N switch) is replaced as the culprit causing the no-upshift condition. When the condition does not improve, the VSS is replaced, also to no avail.

The unnecessary replacement of these components resulted from a number of reasons. One is that no codes were stored to offer a diagnostic direction. Another reason was that no diagnostics were performed on the mode switch and VSS, which would have checked good. A third reason could be a lack of understanding as to which components and computer strategy are required to upshift the transmission.

The actual cause of the no-upshift condition was the failure of the transmission speed sensor (TSS). The TSS is not to be confused with a turbine-speed sensor; the 4L30-E does not use one. The TSS also can be referred to as the output-shaft-speed (OSS) sensor.

One point that you must understand is that the VSS has nothing to do with shifting the transmission in these vehicles; it is the TSS that does that. Conditions that allow the TSS to go unnoticed are the facts that it is hard to see because it is mounted on top of the transmission – especially if it is a four-wheel-drive application (Figure 8) — and the criteria required to store a code for the TSS. The engine has to maintain at least 3,000 rpm with zero rpm from the TSS for a prolonged period; technicians usually will not put that degree of stress on an engine.

Another point is that the VSS is what provides the signal for the speedometer and is wired to the speedometer cluster, where the signal is distributed to other modules requiring a VSS signal, such as the ECM and cruise-control module. In addition, the VSS is a three-wire Hall-effect sensor; the TSS is a two-wire AC generator. The TSS is hard-wired to the TCM and does not even send a signal to the ECM. Prior to the 1996 model year these vehicles were equipped with a separate TCM and ECM. 1996 and later vehicles combined transmission operation and engine performance into one module, a PCM. In either instance, computer strategy provided no correlation between VSS and TSS signals. Figure 9 illustrates the two-module VSS system, and Figure 10 shows the 1996 and later PCM VSS system. Figures 11 and 12 show both the early and late TSS systems.