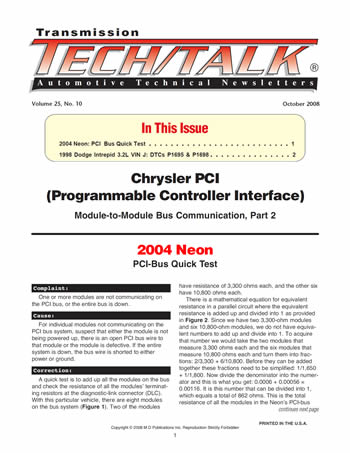 One or more modules are not communicating on the PCI bus, or the entire bus is down.

For individual modules not communicating on the PCI bus system, suspect that either the module is not being powered up, there is an open PCI bus wire to that module or the module is defective. If the entire system is down, the bus wire is shorted to either power or ground.

If this resistance check shows near 0 ohms the system may be shorted to ground.

If the resistance reads higher, one or more of the modules have lost their grounds.

If the resistance checks good, switch your meter to DC volts, turn the ignition on and recheck terminal 2 in the DLC. You should observe a minimum of 0 to 1.5 volts to a maximum of 6.25 to 8 volts. Anything substantially above 8 volts means the circuit is shorted to power.

If there is a code specifying the module that is failing, check that module’s power source and ground path as well as the terminating resistor at the module itself. Many times, just unplugging and cleaning the connector resolves the problem.

Note: Before making any tests at the DLC with an ohmmeter, let the car sit for an hour to be sure that all the computers are at rest and discharged; otherwise, your resistance readings will be erratic.

You also may note that the engine starts and runs well and the transmission shifts properly, yet in the mechanical instrument cluster (MIC) in Figure 5, the tachometer, speedometer and coolant-temperature gauge do not work and the MIL is illuminated, but the fuel gauge is working as well as the PRNDL display, other than when a bus-error message may appear.

The powertrain control module (PCM) is no longer broadcasting this information to the MIC.

Since the RPM, VSS and ECT gauges are inoperable while the fuel-level and PRNDL displays are, it is sensible to conclude that the PCM is the module having problems communicating with the MIC.

Five modules are being used in this 1998 Dodge Intrepid (Figure 8). They are the PCM, MIC, ACM (airbag), TCM and BCM.

By adding and dividing the resistance of each module on the circuit as shown in Figure 8, you can perform a quick check of the entire PCI circuit at terminal 2 in the DLC (Figure 9). If the entire circuit measures correctly, you can determine that the system is neither shorted nor open and that the PCM itself is defective.

If the entire PCI bus measures correctly, replace the PCM.