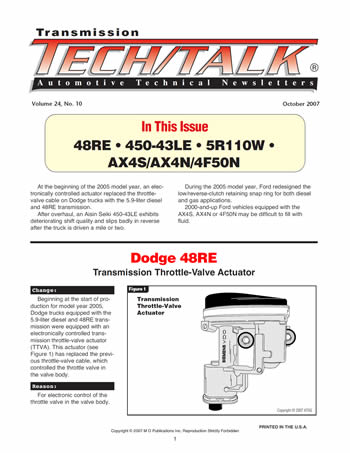 Beginning at the start of production for model year 2005, Dodge trucks equipped with the 5.9-liter diesel and 48RE transmission were equipped with an electronically controlled transmission throttle-valve actuator (TTVA). This actuator (see Figure 1) has replaced the previous throttle-valve cable, which controlled the throttle valve in the valve body.

For electronic control of the throttle valve in the valve body.

The TTVA consists of an electronic DC motor with two potentiometers and a gear-driven system that controls the throttle valve in the valve body for shift timing, passing gear below fourth gear and pressure control. The position of the geartrain is monitored by the TTVA-position sensor, which supplies an input to the engine control module. The ECM controls the TTVA through the inputs of accelerator-position sensors 1 and 2. Refer to Figure 2 for a comparison chart of APP1 and APP2 with the voltages that control the TTVA and the TTVA-position voltage feedback to the ECM.

Note: If the TTVA is removed from the transmission, the ECM will have to relearn its “0” position. The ignition will have to be turned on and the engine off for 30 seconds to accomplish “Auto Zero.”

With the addition of the TTVA a new wiring harness was introduced. Refer to Figure 3 for a partial wire schematic of the TTVA and its connectors.

Refer to Figure 4 for a list of new diagnostic trouble codes related to the TTVA. Note: Some of the DTCs listed can cause the ECM to shut off voltage to the TTVA . This will in turn cause the motor position to be in high TV mode.

Two bosses were added to the transmission case for attachment of the new TTVA (see Figure 5).

The previous-design transmission case is not interchangeable with the new-design TTVA because of the lack of bosses.

After overhaul, the transmission seems to operate reasonably well when the truck is cold, although shift quality is not the best. Once the truck has been driven one to two miles, shift quality deteriorates further and reverse is slipping badly. Reverse movement is non-existent on any degree of incline.

The pressure-control solenoid has been installed 180° from its correct position (see figures 6 and 7).

Install the pressure-control solenoid with the solenoid feed ports facing the corresponding passages in the valve body, as shown in figures 8 and 9.

Sometime in the 2005 model year Ford Motor Co. redesigned the low/reverse-clutch retaining snap ring for both diesel and gas applications, replacing the two previous designs. A Ford Customer Satisfaction program, 05B27 Supplement #1, that ended in September 2006 would cover the replacement of this snap ring and/or transmission case under warranty, regardless of miles, on certain 2005 models. This new snap ring is a mandatory replacement and will back-service all models.

The reason for this replacement was, according to the service bulletin: “When the affected vehicles are used for snow plowing, it is common to shift between forward and reverse repeatedly and, at times, rapidly. Under this condition, the snap ring that retains the low/reverse clutch in the 5R110 Torq Shift transmission may rotate out of position and become partially unseated from the transmission case splines, leading to either partial or complete loss of transmission reverse gear function. This program is being conducted to change the snap ring to a revised design to avoid this concern.”

Low/reverse snap ring, and its assembly into the case. The new snap ring has tabs (see Figure 10) that are to be located at the 12 and 1 o’clock positions in the case as shown in Figure 11.

Refer to Figure 12 for a breakdown of the low/reverse-clutch assembly.

Note: A service pack available from Ford Motor Co. that was one of the service options under the Customer Satisfaction Program mentioned above includes the new snap ring, pump-to-case gasket, solenoid body-to-case gasket, pump seal, sump filter and front-pump bolts. At this time the kit is less expensive than the snap ring alone. The part numbers for these kits are:

2000-and-up Ford vehicles equipped with the AX4S, AX4N or 4F50N may be difficult to fill with fluid.

The cause may be that a new-design rubber cap covering the metal vent stem has softened, plugging the vent and not allowing the transmission to breathe. Note: This also may cause the dipstick to pop out of the filler tube and, depending on the location of the tube, allow water intrusion into the transmission fluid.

To correct this condition, replace the vent assembly, shown in Figure 13, with the part number listed below.