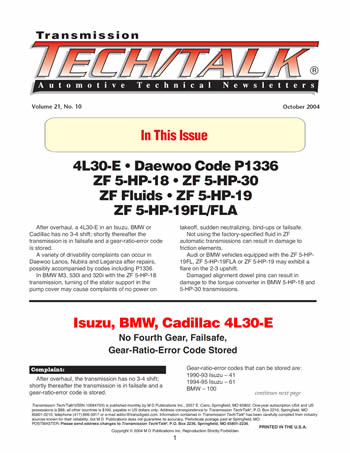 After overhaul, a 4L30-E in an Isuzu, BMW or Cadillac has no 3-4 shift; shortly thereafter the transmission is in failsafe and a gear-ratio-error code is stored.

A variety of drivability complaints can occur in Daewoo Lanos, Nubira and Leganza after repairs, possibly accompanied by codes including P1336.

In BMW M3, 530i and 320i with the ZF 5-HP-18 transmission, turning of the stator support in the pump cover may cause complaints of no power on takeoff, sudden neutralizing, bind-ups or failsafe.

Not using the factory-specified fluid in ZF automatic transmissions can result in damage to friction elements.

Damaged alignment dowel pins can result in damage to the torque converter in BMW 5-HP-18 and 5-HP-30 transmissions.

Gear-ratio-error codes that can be stored are:

The overrun lockout-valve retainer was installed backward (refer to Figure 1), preventing the valve from moving against the spring to allow fourth-clutch feed oil to apply the fourth clutch. The gear-ratio-error code is stored when fourth gear is commanded but does not occur.

Install the overrun lockout valve retainer as shown in Figure 2.

After repairs, the vehicle may exhibit a variety of drivability complaints. The malfunction indicator light may be illuminated with a variety of diagnostic trouble codes stored in the computer’s memory including P1336 – “58x Crank Tooth Not Learned.”

BMW’s M3, 530i and 320i vehicles equipped with the ZF 5-HP-18 transmission may exhibit a complaint of no power on takeoff, feeling as if the stator in the converter is defective. Other complaints may be sudden neutralizing, bind-ups and/or failsafe.

It is not uncommon to find that the stator support in the pump cover has turned. The severity of the turn will determine the type of complaint.

If the stator support has turned inside the cover, the assembly will need to be replaced. ZF Industries calls the replacement support and cover the
“intermediate plate” (see Figure 3). The part is 1056-210-119 and lists for $524.45.

ZF Industries recommends specific fluid for its automatic transmissions. If an incorrect fluid is used, the bonding agent between the friction and backing plate may deteriorate. The converter clutch is most prone to this negative reaction. The fluid recommendation can be determined easily by the color of the transmission’s identification tag. Figure 4 is an application chart showing the manufacturer’s specified fluids for four-speed transmissions, and Figure 5 shows the fluids specified for five-speed transmissions.

When looking at these charts you will notice that Shell fluid is used for only one application. We have noted that if the black-tag 5-HP-30 has been rebuilt with new clutches and is being installed with a rebuilt torque converter, and all the clutches are dry, the Esso fluid LT71141 can be used in place of the Shell fluid without any negative results. Mixing Esso and Shell fluids in any application is not recommended.

The cause may be a loss of apply pressure to the F clutch because of a sealing ring wearing into a bushing (see Figure 6).

Because they are very thin, these dowel pins are easily destroyed, resulting in the transmission being off center and causing the complaints mentioned.

Heavier alignment dowel pins that are not so easily damaged are available (refer to Figure 9). Instruct R&R staff to exercise care when installing either of these transmissions into a BMW.