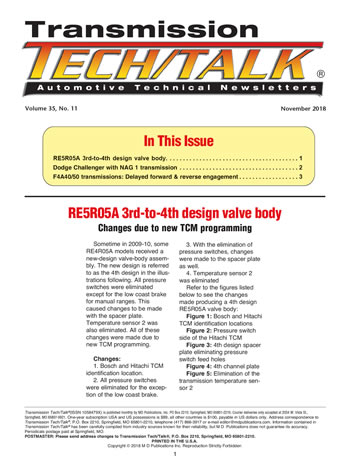 Sometime in 2009-10, some RE4R05A models received a new-design valve-body assembly. The new design is referred to as the 4th design in the illustrations following. All pressure switches were eliminated except for the low coast brake for manual ranges. This caused changes to be made with the spacer plate. Temperature sensor 2 was also eliminated. All of these changes were made due to new TCM programming.

Refer to the figures listed below to see the changes made producing a 4th design RE5R05A valve body:

Figure 2: Pressure switch side of the Hitachi TCM

A 2009 Dodge Challenger comes into the shop with a no-move complaint. It is determined that the transmission needs to be rebuilt. After the rebuild, the transmission would shift erratically and sometimes neutralize during a 3-4 shift. figures 6, 7 and 8 are screen captures showing the occasional 3-4 neutral condition.

When this occurred, code P0730 would store placing the transmission into limp. After changing the valve body and conductor plate, the erratic shift and occasional neutralizing complaint persisted. It was noticed that the engine had been modified and different size tires were put on the vehicle. The shop decided to bring the car to the dealer to perform a pinion factor, which seemed to settle the problem down for a short while. The shop was also told by the dealer that the 5.7L engine had 6.1L programming installed. Soon after receiving the car the problems began to return. At this point the shop chose to install a dealer transmission but the problem remained.

When the tech decided to make electrical checks at the TCM and to inspect it for transmission fluid being drawn up through the wiring, a modification was discovered. An electronic shift kit / line lock style box was piggy backed onto select wiring (Figure 9).

When the modification kit was removed, the transmission functioned as designed.

After overhaul a vehicle equipped with an F4A40/50 series transmission may exhibit a three to five second delay in forward and reverse engagement.

The two large exhaust checkballs that sit in the top of the solenoid body have been left out (figures 10 & 11).

These two checkballs have no springs and are unseated by excess fluid flow from clutch pack circuits. These checkballs seat by gravity when excessive fluid pressure drops thereby acting as a clutch circuit pre-fill pressure-regulating device. The detent lever part of the internal linkage keeps these checkballs from coming out of place, however, once the valve body is removed they are free to roll away unnoticed creating a leak in various clutch circuits.

Find these checkballs and reinstall them, if they cannot be found, find two steel checkballs approximately 0.375” in diameter as replacements.