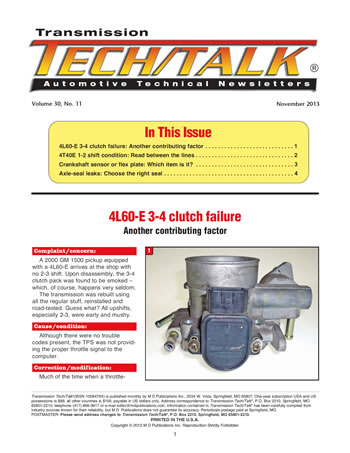 In This Issue
4L60-E 3-4 clutch failure: Another contributing factor
4T40E 1-2 shift condition: Read between the lines
Crankshaft sensor or flex plate: Which item is it?
Axle-seal leaks: Choose the right seal

The transmission was rebuilt using all the regular stuff, reinstalled and road-tested. Guess what? All upshifts, especially 2-3, were early and mushy.

Although there were no trouble codes present, the TPS was not providing the proper throttle signal to the computer.

Much of the time when a throttle-position sensor (TPS) fails to function correctly, specific trouble codes will be triggered. In this case, there were none. In addition, a scanner was connected to check for TPS output.

Normally, TPS readings range from 0.5 volt at idle to 4.5 volts. The output of the TPS on this vehicle was slightly lower. Apparently, it was low enough to impact performance, but not enough to raise the flag.

As it turns out, several months prior, engine work was performed on the vehicle. Among other things, the TPS was replaced with an aftermarket brand. Driving the vehicle with a deficient TPS for a period of time will absolutely trash the 3-4 clutch and the customer doesnʼt even know it until itʼs too late. Replacing the TPS (Figure 1) was all that it took to make the transmission function correctly.

In the end, installing an inferior part on the engine was enough to trash the transmission, at the customerʼs expense. It could also have been at the shopʼs expense but for a good diagnosis.

A 4T40-E in a 2001 Chevy Malibu had been rebuilt about nine months prior to the vehicle returning to the shop with a shift complaint. The customer said the transmission suddenly acted differently than it had been.

The vehicle was inspected (fluid check, fault codes etc.) and then taken for a road test. The problem was second gear. It was almost non-existent with the selector in drive range; however, once the selector was placed into manual second, it worked well during the 1-2 upshift. There were no trouble codes present either. All other gears applied normally.

The culprit, as it turned out, was the 1-2 accumulator piston. It had cracked because of either fatigue or a pressure spike. In conjunction with the cracked piston was a broken inner cushion spring (Figure 2). The question is, which one bit the dust first?

Based upon how the vehicle operated, it would have been customary to “yank” the transmission and “peel” it down to inspect the second-clutch-pack assembly. The question remained, though: Why did it work so badly in drive and so well in manual second?

If all else fails, break out the oil schematics and start comparing. The first schematic to look at is the one for second gear, drive range (Figure 3).

The second-clutch apply circuit that is involved in the 1-2 upshift is pretty straightforward. The task at hand is to determine where in the circuit the problem could be, such as a cross leak or a checkball not seating properly.

Once the computer commands second gear, the 1-2 shift solenoid is fired, allowing line pressure to enter the second-clutch circuit. From the 1-2 shift valve, second apply oil goes to the 2-3 shift valve (in preparation for next shift), TCC PWM solenoid, seats the #2 checkball and passes through two orifices. From there, the apply oil starts to stroke the 1-2 accumulator piston, while applying the second clutch.

Overall line pressure is controlled by the EPC solenoid, by providing torque-signal oil to the pressure-regulator boost valve. In addition, the EPC controls both accumulator regulator valves. Line pressure also goes to three pressure switches at the pressure-switch manifold (PSM).

So, how do things differ when the gear selector is put into manual second? To start with, pressure is cut off to the D4 pressure switch in the PSM as illustrated in Figure 4. That alone could be a source of a 1-2 shift problem.

Another difference between the D4 and D2 gear ranges is that the coast clutch is applied because of the D3 selector activating the coast-clutch circuit. The applied coast clutch would have little bearing on second gear, though. The D21 pressure switch is also activated in manual second, which has no impact on drive range, second gear.

The main difference between the D4 and D2 gear ranges, which can affect the 1-2 shift feel, is that the 2/4 band is applied in manual (D2) second. The purpose of the second clutch and second roller clutch is to hold the reverse drum stationary. The 2/4 band also holds the reverse drum stationary, but for a different reason, such as engine braking during a coast-down.

The 2/4 band does not rely on the 1-2 accumulator piston to be intact to provide a good apply, whereas the second-clutch pack does. Since there is no separate manual-second boost pressure, as with other transmission models, the inclusion of the 2/4 band apply in second gear explains the performance difference between D4 and D2 selector ranges and the importance of the 1-2 accumulator piston in D4.

Before doing major work, it is always better to “read between the lines.”

A customer arrives at the shop with a 2008 Chrysler Town & Country equipped with a 3.3L engine and 41TES transmission. Not only was the engine running a bit off, but the transmission was not shifting that great either. The check engine light was on as well.

Apparently, the vehicle was at another repair shop to have a leak repaired, requiring removal of the transmission. Upon completion of the job, things started to go south quickly. When the customer returned to pick up the vehicle and it didnʼt work quite the same as when it was dropped off, that was a problem. The check engine light was not on at that time but came on later.

There also must have been some confusion as to responsibility between the shop and customer. As it turns out, the trouble code was a P0339, which indicated a crankshaft-position-sensor (CKP) issue.

As with most speed sensors, clearance is really important. Without the proper air gap, several problems can arise, depending on which sensor and what the gap is.

In addition to the fixed position of the sensor is the integrity of the tone ring (reluctor). A bent tone ring can cause the same conditions as the sensor itself. Anyone whoʼs rebuilt a 5R55E or 5R55S knows how fragile the tone ring is on the OD planet.

In the case of the Town & Country, two things happened. During the R&R process, the tone ring on the flex plate was damaged slightly, affecting the continuous air gap. In addition, on certain Chrysler applications there is a shim that goes under the crankshaft sensor (Figure 5). The shim was missing as well.

Both items must be correct, not damaged and installed properly. Figure 5 shows only the first page of the TSB. The entire TSB is several pages long and describes the testing process, and it contains both the shim and flex-plate part numbers.

As time goes on there will be more of this type of issue, where non-transmission items impact proper transmission operation. Finding them will be the hard part.

The owner of a 2002 Dodge Caravan equipped with a 41TE complains of a noise while turning a corner. The noise, as it turns out, was a bad CV joint. The left axle shaft was replaced, along with the axle seal, which took care of the noise.

The vehicle returned to the shop shortly afterward with an axle-seal leak. There was no leak initially.

Axle-seal leaks have plagued certain FWD vehicles for some time now and for different reasons.

One notorious example of axle-seal problems was with the launch of the GM 125 in 1980. With very few miles on the vehicle, the axle seal would start to gush fluid, especially on the right side. The source of the problem was the final-drive carrier bore wearing prematurely, which would allow excessive up-and-down movement of the axle shaft. Some final drives got so bad that the axle would pop out of the transmission.

The temporary fix was to install the infamous axle stabilizer (either OEM or Teckpak). The long-term fix by GM was to “melonize” (heat treat) the carrier. The process provides a high surface hardness to eliminate wear. The main reasons for radial seal leaks are:

In the case of the Dodge Caravan, there were two contributing factors. The replacement axle shaft had a rather coarse finish on the journal where the seal rides, which seems to be a problem on new or reman axle shafts for certain applications. Close inspection of the seal journal surface must be done to ensure that there are no marks or lathe grooves (Figure 6). If there are, the surface needs to be polished smooth.

The other issue was the metal-clad seal itself. Years ago, Chrysler had an ongoing problem with axle-seal leaks, especially on the left (driver) side. This was also due to up-and-down motion of the axle shaft; similar to the problem with the GM 125, but not so much because of wear. The A670/A604 differential bores just seemed to be more sloppy than needed. Because of this issue something needed to be done.

The fix was a seal redesign, which was developed by a metal-clad-seal company called PSD (Precision Seal Division). The original PSD seals were identified by the “blue” bore-coat color. PSD was finally acquired by Chicago Rawhide (SKF), and the “CR” logo replaced the PSD logo. The bore coat was also changed from blue to CR “green” (Figure 7).

The seal design is important regardless of color. The style of the lip of the seal is unique in that it floats, unlike traditional seals. A regular metal-clad seal has the metal casing with the rubber lip attached, along with the garter spring. There is a certain amount of movement capability of the lip.

The “correct” seal to use actually has an extra membrane between the metal casing and rubber lip that allows the entire lip to move uniformly with the axle-shaft journal, thus reducing leaks (Figure 8). This seal design has saved and cured much grief.

The Caravan was finally fixed by polishing the journal and installing the proper seal.

In the end, look for potential problems, prepare items correctly and use the right part.