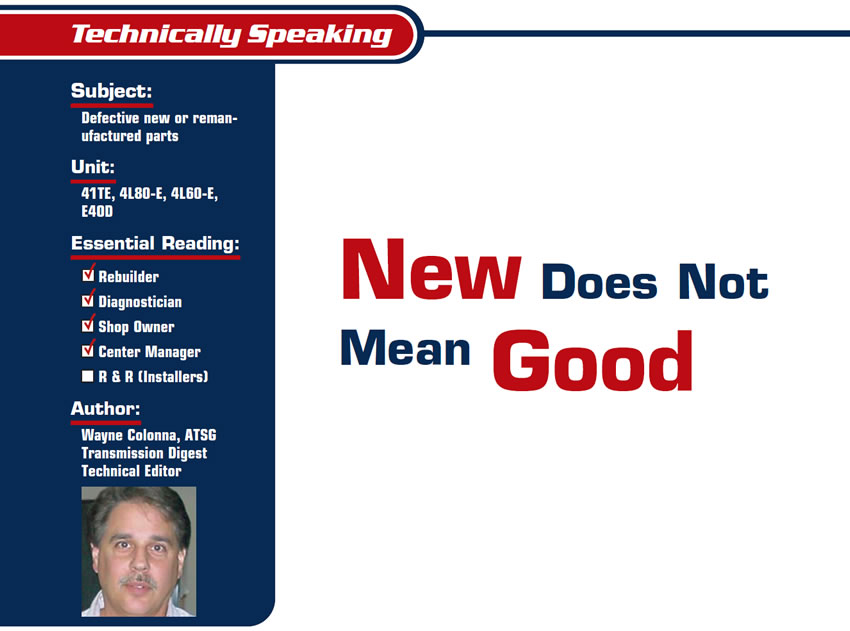 As if the transmission industry weren’t difficult already, technicians also have to contend with new or remanufactured products that malfunction right out of the box.

As if the transmission industry weren’t difficult already, technicians also have to contend with new or remanufactured products that malfunction right out of the box.

I have lost count of how many calls we have taken regarding a 41TE transaxle that produced a code 41, Low/Reverse Solenoid Circuit error. The solenoid and wiring were checked and determined to be good, leading to the conclusion that the TCM is faulty. The shop bought a remanufactured module, and immediately after it was installed code 41 returned.

Of course, it could not be the TCM; after all, it had just come out of the box right from the dealer. After the technician rechecks the wiring and maybe replaces the solenoid body and wire for the solenoid, the code remains.

Some technicians begin to think that maybe the code is being set because of an internal problem, especially if they have replaced the TCM for a second time with another reman module. We have had instances in which the module has been replaced three to four times before the shop finally received one that works correctly.

We received a brand-new 4L80-E turbine shaft (see Figure 1) from AAMERCO Transmissions in Greenwood, S.C., that caused the transmission to have no forward movement in any range but a great reverse. Since the turbine shaft was new, no one thought to check whether the forward-clutch feed hole was drilled through in the shaft.

We also received a brand-new TCC orifice filter for a 4L60-E (see Figure 2) from Klopp Enterprises in Corning, N.Y., that caused a P1870 code. There was no opening in the filter, blocking oil to the solenoid.

Figure 3 shows a brand-new feed bolt that was used in an E4OD. Unfortunately, it was cast completely shut and was placed into the lube-passage location. You can imagine what damage occurred on a road test. Why couldn’t it have been placed into the forward feed passage? At least no forward engagement would have occurred before the problem was discovered, but no, it had to get into the lube circuit.

This just goes to show that even new does not mean good, and this must be a part of a diagnostician’s thinking process. And, as much as possible, whatever is new should be looked at and/or tested carefully before being used.

One other tip that can go a long way is to always verify the integrity of the shop’s digital volt/ohmmeter. We also have seen plenty of misdiagnosis as a result of inaccurate readings from a faulty meter – another black hole for money and time.

New Does Not Mean Good