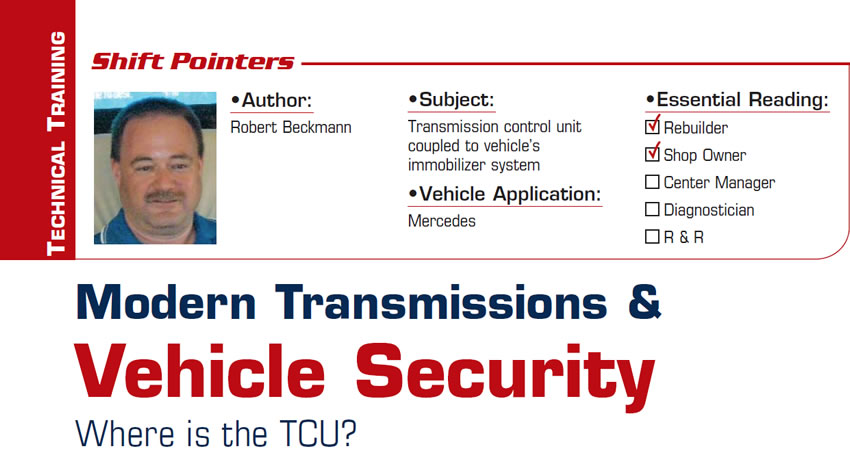 Engine-management computers have moved from the passenger compartment to under the hood to the top of the engine to reduce wiring (copper) and assembly costs in vehicles. Many of you may have seen manufacturers even begin to place the transmission control unit (TCU) inside the transmission (Figure 1). I am not aware who was first to use this technology, but I have seen it for many years on Mercedes-Benz vehicles.

How quickly things have changed. Wherever you look, vehicles are becoming more compact, with fewer connectors and electrical wiring than ever. Computer networking and more-heat-resistant electronic components are making this possible.

Engine-management computers have moved from the passenger compartment to under the hood to the top of the engine to reduce wiring (copper) and assembly costs in vehicles. Many of you may have seen manufacturers even begin to place the transmission control unit (TCU) inside the transmission (Figure 1). I am not aware who was first to use this technology, but I have seen it for many years on Mercedes-Benz vehicles.

Now there are sensors, solenoids and connectors mounted directly on copper conductive films to further reduce needed wiring. Although some of the transmissions still have a mechanical link to the floor shifter, most no longer do. The only connections to the transmission are electrical-power supply, ground and digital-communication data lines (Figure 2). Even many dipsticks have disappeared, since the transmissions are “lifetime fill.” The only way to change fluid is to drop the pan, replace the filter and pump fluid in from below. You check the level by opening the plug on the bottom and watch the oil drip out until it levels off at the top of the fill tube.

But wait; along the way someone had a stroke of brilliance! In addition to these savings, why not couple the TCU to the vehicle’s immobilizer system, making it more difficult to steal! You can’t probe or easily tamper with the software in the TCU, since it is encased inside the transmission.

However, there are some significant side effects, especially for our industry. Since the TCU is now tied to the immobilizer system of a particular vehicle, it is no longer possible to move this transmission to another vehicle. Nor is it possible to rebuild the transmission in the conventional fashion for re-use, since the TCU is locked. Testing the transmission on a test stand is nearly impossible with commonly available equipment. Also, any perfectly good transmissions from the dismantlers are now pretty much worthless.

Why don’t we just buy new unlocked TCUs? OK, but initially Mercedes planned to sell the TCU only with a complete programmed and flow-tested valve body. This is pretty expensive, since you have all the aluminum parts, valves, springs and solenoids. Prices ranged from about $600 to $1,800 depending on the program that was loaded. Of course, the factory-authorized rebuilder could buy the TCU alone (about $100) and re-use all the machined valve-body parts, but not the independents; they were forced to buy the complete valve-body assembly. With these additional costs you can see how the independent is now at a significant financial disadvantage, making it very difficult to compete with the OE.

The plan was really coming together until a very high failure rate started to kill many of the internal TCUs. There are a number of speed sensors that are bonded to the conductive foil, and these sensors are failing along with some other components. Mercedes was getting hit with enormous warranty claims from all the dealers having to put in complete valve bodies. Mercedes had to find a way to save on warranty claims, so it decided to make the TCU available as a separate part.

The company quickly modified its diagnostic software, allowing it to transfer the flow characteristics and part number from the defective unit to the replacement TCU. It didn’t work well at first, but eventually it was sorted out. So now that the TCU was available separately, the rebuilder could at least try to compete with the factory-reman product. But it did not last long. Mercedes decided to add this part to its list of “Theft Related Parts,” just like locks and keys, under the guise of vehicle security. Unless you are a dealer you do not have access to these parts. They are now protected. But an independent shop can back up to the dealer’s dock and load up a brand-new or reman complete transmission all day long. That seems a bit hypocritical but underscores the true motivation, in my opinion.

There are many sides to this issue. The vehicle manufacturer believes that since it has invested heavily in technology and development of these components, it deserves the opportunity to protect this aspect of its and its dealers’ businesses. They are certainly entitled to do so, but for how long? Will they choose to make the unlock codes available to independent rebuilders at some point in the future? I would guess not unless forced to do so, but by whom?

I have been fighting this battle since 2008, and it has fallen mostly on deaf ears. Sure, I get some sympathy from a handful of people, but this type of technology is just now starting to show up in your service bay. At first it will be easier to just send the customer away, probably to the dealer, but for how long? How much business do we need to lose for something to change?

Remember that once the TCU is buried inside the transmission it is simply a mouse click away for a manufacturer to tie the software into the immobilizer. How quickly do you think the other manufacturers will choose to adopt this system? This is only the beginning. As this technology becomes more commonplace, immobilizer functions will be deployed in many other vehicle systems, leaving the aftermarket asking itself, “What happened to our businesses?”

So what can we do? We need to educate people in our industry and stress the importance of support of the aftermarket. We can’t allow manufacturers to “put us out of business.” We have ASA (Automotive Service Association, www.asashop.org) that is here to help us. Let them know how you feel. We have the NASTF (National Automotive Service Task Force, www.nastf.org), which was set up to arbitrate disputes between the aftermarket and the manufacturers. There has been lots of work to set up the SDRM (Secure Data Release Model). Let them know this program needs to be expanded immediately to include the sale of theft-related components.

If you have been directly affected by a manufacturer refusing to sell you parts even though the dealer can get them, contact your senator or congressman and ask for help filing a complaint with the Department of Justice (www.justice.gov/atr) for unfair business practices. A good reference for links to various associations is http://www.autoconsulting.com/autotrade.htm.

There is additional current information at www.beckmanntechnologies.com/trp.php

Modern Transmissions & Vehicle Security: Where is the TCU?