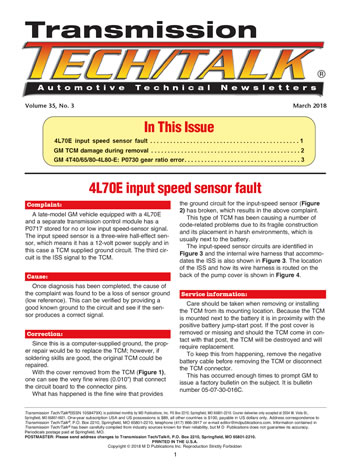 A late-model GM vehicle equipped with a 4L70E and a separate transmission control module has a P0717 stored for no or low input speed-sensor signal. The input speed sensor is a three-wire hall-effect sensor, which means it has a 12-volt power supply and in this case a TCM supplied ground circuit. The third circuit is the ISS signal to the TCM.

Once diagnosis has been completed, the cause of the complaint was found to be a loss of sensor ground (low reference). This can be verified by providing a good known ground to the circuit and see if the sensor produces a correct signal.

Since this is a computer-supplied ground, the proper repair would be to replace the TCM; however, if soldering skills are good, the original TCM could be repaired.

With the cover removed from the TCM (Figure 1), one can see the very fine wires (0.010”) that connect the circuit board to the connector pins.

What has happened is the fine wire that provides the ground circuit for the input-speed sensor (Figure 2) has broken, which results in the above complaint.

This type of TCM has been causing a number of code-related problems due to its fragile construction and its placement in harsh environments, which is usually next to the battery.

The input-speed sensor circuits are identified in Figure 3 and the internal wire harness that accommodates the ISS is also shown in Figure 3.

The location of the ISS and how its wire harness is routed on the back of the pump cover is shown in Figure 4.

Care should be taken when removing or installing the TCM from its mounting location. Because the TCM is mounted next to the battery it is in proximity with the positive battery jumpstart post. If the post cover is removed or missing and should the TCM come in contact with that post, the TCM will be destroyed and will require replacement.

To keep this from happening, remove the negative battery cable before removing the TCM or disconnect the TCM connector.

This has occurred enough times to prompt GM to issue a factory bulletin on the subject. It is bulletin number 05-07-30-016C.

Some GM vehicles since about 2005 that had TCM damage also had 12-volt batteries in inaccessible locations. In an effort to provide a more reachable battery jump point, GM installs a remote jump stud which is connected to the positive battery cable. This jump stud can be in proximity to the vehicle’s transmission control module (Figure 5).

In many instances the protective cover is missing from the jump stud, and when vehicle repairs require TCM removal, an accidental short to power between the TCM housing and the positive battery jump stud causes instant damage to the TCM internal circuit board, requiring the TCM to be replaced.

Prior to removing the TCM from its mounting bracket, disconnect the negative battery cable. Once the TCM is clear of the jump post, the battery cable can be reconnected for diagnostic circuit checks.

CAUTION: At no time should the metal case of the TCM come in contact with the positive battery jump post. Never use the TCM or its mounting bracket for a ground when jumping or charging the battery.

Before or after overhaul, General Motors vehicles equipped with the 4T40/45, 4T65, 4T80E transaxles or 4L80E transmission may have a complaint of a recurring diagnostic trouble code P0730 Gear Ratio Error.

The cause may be one or more components slipping inside of the transmission or possibly a mismatched sprocket assembly and/or final drive ratio. Other causes may be wrong gear starts and or missing ratios. The way to verify which components could be at fault is to refer to Figure 6 and note the location of the ratio PID and the 1-2/2-3 solenoid ON/OFF PID’s on the data list as shown.

Note: The example is of a 4T65E application. To pinpoint an exact cause or component that is at fault, it will help greatly if you can connect the P0730 to a specific gear.

To correct this condition, refer to Figure 6 and locate the PIDs for solenoid application and compare it to the ratio provided by the scan tool. Match this information up with the charts listed in figures 7 and 8 based on the vehicle you are working on. Areas that can be resolved with this information include slip on take off, wrong gear starts, no up-shifts, no 3rd and no 4th. Another item that can be verified is whether the wrong ratio was installed as all of the ratios will be wrong.