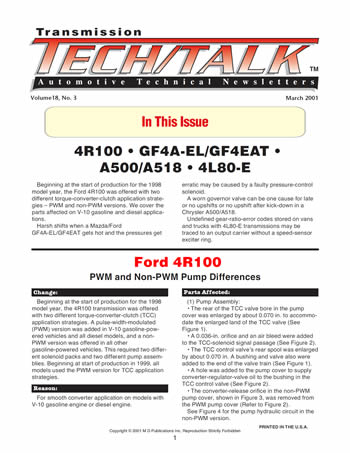 Beginning at the start of production for the 1998 model year, the Ford 4R100 was offered with two different torque-converter-clutch application strategies – PWM and non-PWM versions. We cover the parts affected on V-10 gasoline and diesel applications.

Harsh shifts when a Mazda/Ford GF4A-EL/GF4EAT gets hot and the pressures get erratic may be caused by a faulty pressure-control solenoid.

A worn governor valve can be one cause for late or no upshifts or no upshift after kick-down in a Chrysler A500/A518.

Undefined gear-ratio-error codes stored on vans and trucks with 4L80-E transmissions may be traced to an output carrier without a speed-sensor exciter ring.

Beginning at the start of production for the 1998 model year, the 4R100 transmission was offered with two different torque-converter-clutch (TCC) application strategies. A pulse-width-modulated(PWM) version was added in V-10 gasoline-powered vehicles and all diesel models, and a non-PWM version was offered in all other gasoline-powered vehicles. This required two different solenoid packs and two different pump assemblies. Beginning at start of production in 1999, all models used the PWM version for TCC application strategies.

For smooth converter application on models with V-10 gasoline engine or diesel engine.

See Figure 4 for the pump hydraulic circuit in the non-PWM version.

Figure 5 shows the changes to the pump hydraulic circuit in the PWM version.

None of the parts listed is interchangeable from model to model.

Before or after overhaul, 1993 and later vehicles equipped with GF4A-EL transaxles may exhibit harsh 1-2 or other upshifts when hot. Line pressure appears to be normal or slightly higher than normal, 60-70 psi at idle and 161-172 psi at stall, when checked in the D range when the vehicle is cold. However, when the transaxle is hot the pressures get erratic and exceed the stall-pressure specs, which are 175 psi in D and 300 psi in Reverse.

The cause may be a faulty pressure-control solenoid, a worn boost valve and sleeve and/or a worn pressure-regulator-valve bore, which is part of the rear control-valve body.

Any vehicle equipped with an A500/518 transmission may exhibit a complaint of late or no upshifts, or no upshift after passing gear.

An output carrier without a speed-sensor exciter ring was installed in a transmission intended for a vehicle that requires one. However, the output-shaft speed sensor is close enough to the output-carrier park lugs to create a signal sufficient to cause the erratic gear-ratio indications (See Figure 11).

If the vehicle system being serviced requires a functional output-shaft speed sensor, be sure to install an output carrier that has a speed-sensor exciter ring when output-carrier replacement is necessary.

With the start of production for the 1994 model year, the output-shaft speed sensor on all K (4×4) trucks was eliminated. As a result of this action, the speed-sensor exciter ring on the output carrier also was eliminated.

1993 and earlier K and V models and all two-wheel-drive applications require a functional output-shaft speed sensor and therefore also require an output carrier with a speed-sensor exciter ring.