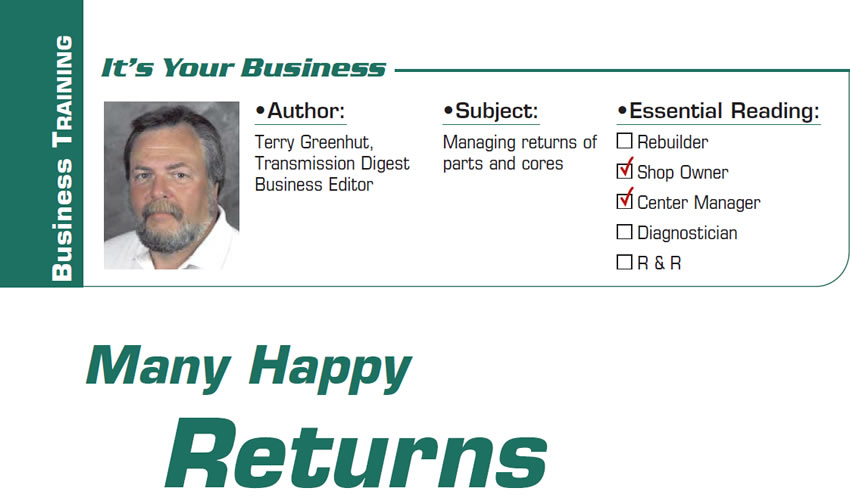 Since so many previously dedicated transmission-rebuilding facilities have of late become more oriented toward repairing and servicing the entire vehicle, a new set of challenges has emerged. Leading the pack, believe it or not, is returns – parts and cores that need to go back to local parts stores for credit to the shop’s account.

Since so many previously dedicated transmission-rebuilding facilities have of late become more oriented toward repairing and servicing the entire vehicle, a new set of challenges has emerged. Leading the pack, believe it or not, is returns – parts and cores that need to go back to local parts stores for credit to the shop’s account.

The number of items that we would return for being wrong or defective was minimal yet could still add up to a considerable amount of money, so we did have to be careful. General repair changes the entire dynamic. Instead of receiving a parts delivery once a day you may be getting them once an hour. That’s a whole lot of parts, usually from several distributors and a huge number of manufacturers, the names of which may not even be recognizable to you.

The potential for parts being ordered wrong, packaged wrong or defective is tremendous. We know how much production is slowed when we have cars in the air waiting for parts that don’t come or are just wrong enough that we have to spend way too much time looking for the one little difference between what we needed and what we got. Then, of course, we have the bigger waste when a part is almost finished being installed only to find that one bolt hole doesn’t line up or a connector or wiring setup is wrong. We then have to take it back out, reorder and wait for, we hope, the right part to show up next time, essentially doing the job twice to be paid only once.

None of this is worse than the defective part, the one that doesn’t work right from the get-go or, worse, the one that fails shortly after installation and causes the whole job to have to be redone, not to mention the inconvenience to the customer or the damage to the shop’s reputation and checkbook.

OK, time to add insult to injury. All of those wrong or defective parts have to be returned for credit, but are they? Larger shops often have a parts person dedicated to making certain that all returns and cores are processed and credited. In smaller shops it’s the owner or a part-time bookkeeper who tries to handle the task. Isn’t it sad that we have to pay people to ride herd on the mistakes of others, outside of our own companies, whom we are already paying to provide us with a service? But wait; it gets worse.

A driver from a local parts house recently told me that a fairly high percentage of wrong or defective parts and cores either don’t get returned or are put right back on the shelf to be resold even though they are suspected of being incorrectly packaged, only to be sent back out to the next unsuspecting purchaser, or just don’t get credited to the customer’s account for one reason or another; so on top of getting the wrong or defective parts, at times the shop pays for them twice, totally negating any profit that might have been made on the job.

Why am I making such a big deal out of returned parts? Because the amount of money lost on account of not handling them correctly is staggering. Consider that an average shop winds up, after all is said and done, with about a 10% profit margin. If a shop forgets to return or isn’t credited for a $100 part, it needs to do more than $1,000 in additional sales to make up for the lost profit.

How you handle your returns, your bookkeeping system for tracking whether you are reimbursed for them and your constant attention so that nothing slips through the cracks are vital.

Running the business, just like fixing a car, has to be done logically and follow a set pattern. Transmission rebuilders should understand and accept this because they mostly build transmissions the same way every time. They take them apart, clean and inspect them, then put them back together in a way that ensures that nothing will be left out, installed backward or left over. The vast majority of rebuilders tackle the different components in the same order every time. Some like to start with the pump, some the clutch packs, while others like to get the valve body done and out of the way. They’ve learned to protect the task by doing it the same way every time.

Handling cores and returns needs to have similar disciplines. If you have a system and use it continually there is far less likelihood of forgetting to return parts or cores or not checking to make sure you are reimbursed for all of them. Your system also should include the handling of refused parts, the ones that never make it through the front door because you can see at a glance they aren’t right. You need to make certain that they were never charged to your account. One of my consulting clients doesn’t refuse any parts even if they are obviously wrong. He just returns them with all the other returns. His reason is that several times the parts store tried to charge him for the refused items and since they were refused he didn’t have an invoice or a credit slip by which to prove himself right.

Here are some hints that can save you time and money:

It takes some time to handle returns properly, but the savings will more than justify any additional costs; so “Many Happy Returns.”

Advertisement
In this article:Its Your Business, returns