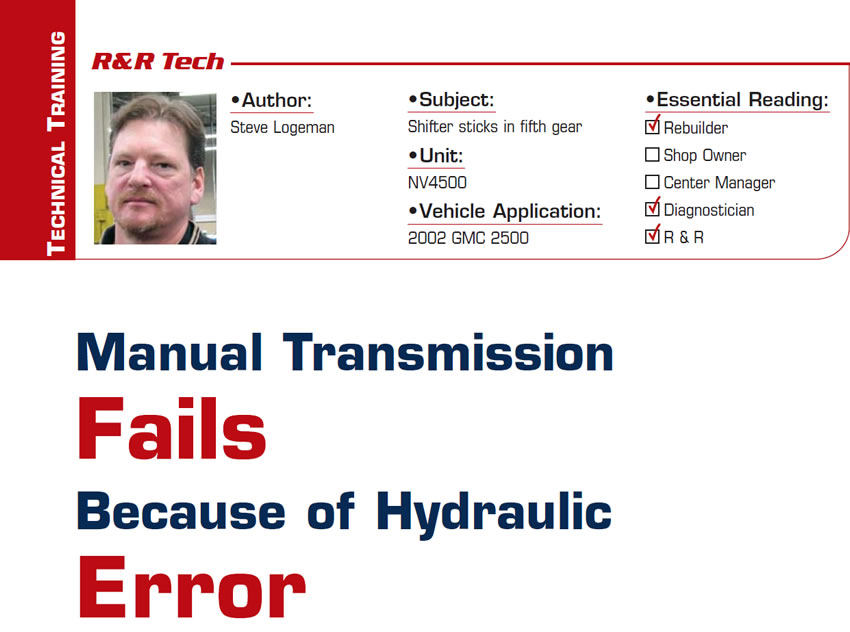 This all started with a 2002 GMC 2500 with a complaint of sticking in fifth gear. The customer said this had happened to him half a dozen times since the transmission was installed 2,000 miles ago, and to make matters worse the technician at our shop could not duplicate the complaint.

This struck me as a very odd complaint for this type of transmission. Over the years there have been a lot issues with fifth gear and the nut that retains it on the shaft, but I do not recall that it ever made the transmission stick in fifth.

No fifth, pops out of fifth, hard to engage reverse – these are typical complaints of this unit. Others include leaks due to cracked cases, extension housings and 4×4 adapter housings.

After I removed the transmission, disassembled the fifth and reverse assembly and the shifter tower and inspected them closely, everything looked really good. At that point I chose to replace fifth gear and the synchronizer assembly. I did a little dance over it, got out the holy water, knocked on wood and crossed my fingers.

I put the transmission back into the truck, drove it several miles with no problems and returned it to the customer. After all, this unit was shifted in and out of fifth a hundred times or so on the bench before and after assembly with no problem.

It didn’t fix it, but I did get a better description of the complaint this time. The customer said, “After driving in fifth for more than a mile, the transmission is hard to shift out fifth gear.”

Now what? To compound the problem, this unit was what we call a stock unit – a transmission we had on the shelf already built. We didn’t know what was wrong with the original unit before it was remanufactured and shelved.

The only real history I had on the unit was a list of the parts we put in it originally, and I saw nothing unusual there. So in desperation I took one more look at the list of parts put into this unit, and the only thing that I had not looked at that might play into this was that the case had been replaced.

At this point, I located a core unit of the same type and disassembled both units side by side for comparison. It didn’t take long before I realized that the two units were different and why they were different. The fifth and reverse shift rails in the case were different. The rail that goes in first (toward the front of the transmission) in the unit in question was completely round (Figure 1), and the one out of the core (Figure 2) had a flat spot machined down the side.

The case had a blind hole (Figure 3), so when the unit was full of fluid and the vehicle was driven in fifth gear for a long period, oil would slosh up around the shift rail and hole. It eventually would fill that void between the case and the rail, so when you tried to move the shifter from fifth the rail would hydraulically lock in the case.

You would have to pull on the shifter and bleed that oil back through the space between the case and rail. Needless to say, now I knew what that flat relief in the other rail was for and why you could shift the transmission flawlessly with no fluid in it. It turns out that some earlier cases (Figure 4) are open and the round pin works just fine. Don’t make the mistake of installing the round pin into a blind-hole case, because it is possible to have a hydraulic failure of a manual transmission.

Steve Logeman has been with Certified Transmission about 15 years and is a technical director at the company’s remanufacturing center in Omaha.