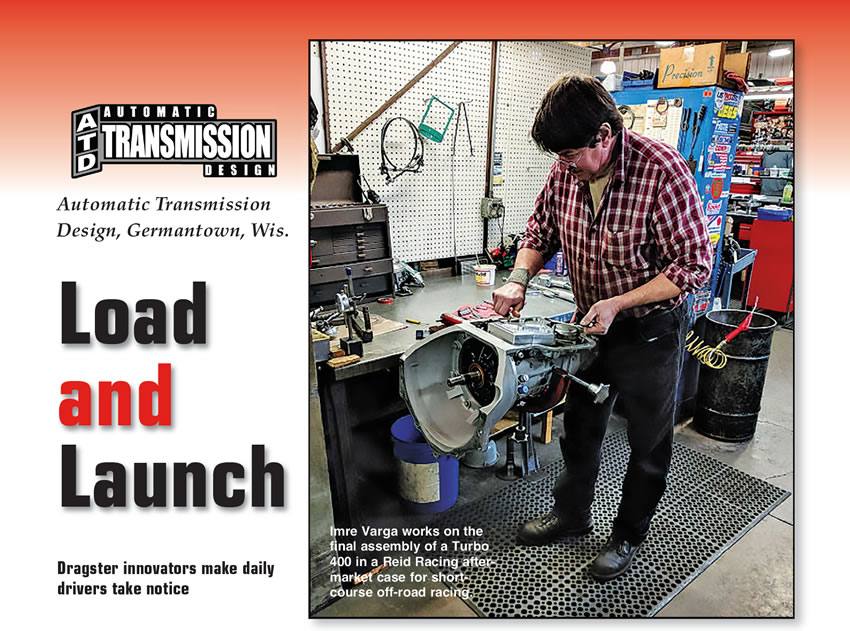 Mike “Hipster” Hohnstein, one of the creators of the transbrake valve body, built a distinguished performance-oriented business, and with two partners he recruited along the way, they have been drawing on their drag-racing expertise to lure daily drivers who like having racing experts working on their transmissions.

Mike “Hipster” Hohnstein, one of the creators of the transbrake valve body, built a distinguished performance-oriented business, and with two partners he recruited along the way, they have been drawing on their drag-racing expertise to lure daily drivers who like having racing experts working on their transmissions.

Although Mike stepped away from the day-to-day operation in 2014, Charlie McCormick and Scott Moore carried on. Scott, an ASE and ATRA certified tech that joined ATD in 2000, runs the retail vehicle service operation and builds a fair amount of the late-model units.

Charlie focuses on the company’s initiatives in aftermarket valve-body components, racing and performance torque converter operation, and related driveline items. At one time, he was the youngest ASE Master Technician in Wisconsin. He studied engineering at Marquette University, but before taking a battery of eight ASE tests, had never opened a transmission other than taking the pan off to do a fluid change.

“ASE gave me a cool diagram, so if you have a brain and can figure out how things work, you could figure out the answers to the questions sitting there right in front of you,” Charlie said. With nearly 30 years at ATD, he specializes in motorsports, torque converters, and classic cars.

In addition, the shop serves several fleets and provides general automotive repair services – all but tires, air conditioning, and painting.

Mike founded the business in 1981 as Hipster’s Garage in Milwaukee. The inventor and innovator developed Hipster’s Brake (the transbrake valve body).

“The concept was to allow a drag car to be held at the starting line so you could load the converter more on the engine to launch harder and faster, therefore improving your ET,” Charlie said.

“The stories that I heard when I first came here were that Mike did a lot of the work at a shop in Indiana, and the first one they tested, they actually built a dyno and built a concrete-block wall in case it blew up, so they wouldn’t be killed! (laughs).”

“The original technology used basically a straight valve, so you have just two active diameters with the span between the two of them. When the valve was stroked, it would apply the reverse clutch. They used a spring, probably a clutch-return spring out of a Powerglide, to push the valve off and release the transbrake. Mike’s contribution to transbrake technology was when he developed the pro-tree brake, which used hydraulic energy to force the valve in the release position significantly faster that any spring would ever do.” This step forward took place in the mid ’80s, and it became the standard in the ’90s, Charlie said.

“Everybody utilizes that technology now, but they put their own spin on it to make their version ‘better.’ It has become the industry standard for transbrake release timing,” he said.

In the early ’90s, the ATD team redeveloped the brake, using aluminum for significant lightening, among other modifications.

“We were able to streamline the porting for the reverse feed, which nearly doubled the reaction on the transbrake. To date, it is the fastest releasing transbrake on the market. There’s nothing faster.”

ATD moved from Milwaukee to the suburb of Germantown, where they aimed to pull from the city while also drawing higher-quality vehicles in the more affluent burbs.

“We saw the area growing up around us. When I first came here, it was mostly farm fields. Within five years there were houses popping up everywhere, with consistent residential traffic.

“That’s why we made a push to get a more realistic footprint – modernize, expand, and have a true customer greeting area. It was originally people bringing us race-car transmissions, dropping them off and leaving. We never had a retail presence,” Charlie said.

The original performance emphasis provided steady work for eight or nine months out of the year, leaving a lull in winter. Now the retail work represents 50-60% of ATD’s revenue and provides a smoother stream of business year-round.

The Germantown facility has two buildings, 30,000 sq. ft. and 18,000 sq. ft., where eight technicians and six other employees work. It has eight lifts and two flats for work that needs no lift. The shop serves fleets and provides general auto repair. The business pulls from a 25-30 mile radius, although some customers come from all over the state and beyond.

“When a racing customer desires specific hydraulic or valve-body functions, they know we can meet their needs,” Charlie said, noting they’re fortunate to have worked with a number of companies over the years, including Sonnax, Coan, TCI and ATI. “We use components that are known to be the benchmark or the industry standard in the products we sell as a completed transmission,” he said.

The Folk family of drag racing is a part of the extended family of ATD. Founder Mike Hohnstein and Ron Folk go way back, and the relationship extends to Ron’s sons, Brian and Nick. Nick is the 2016 NHRA Super Comp World Champion.

“I used to think that the average car owner would think that they wouldn’t want a race-car transmission or other components in their minivan or daily driver. What we’re finding is that when people come in to our showroom and see pictures and plaques of our race-winning customers on our walls, they say something like, ‘You guys build stuff for these? You must really know what you’re doing.’ We hear that all the time,” Charlie said.

As the folks at ATD say —

Automatic Transmission Design has benefited from its efforts in racing to enhance all aspects of their business. They strive every day to provide consistent, quality repairs for all of their customers. Their racing influences are still very strong and they continue to bring new performance components to the aftermarket. They also build diesel transmissions and torque converters, including packages for 1,000+ HP trucks. They specialize in project cars, helping customers transform their vehicles into the performance cruiser they have always desired. From engine packages and retrofitted transmissions to differential overhauls, at ATD anything is possible.