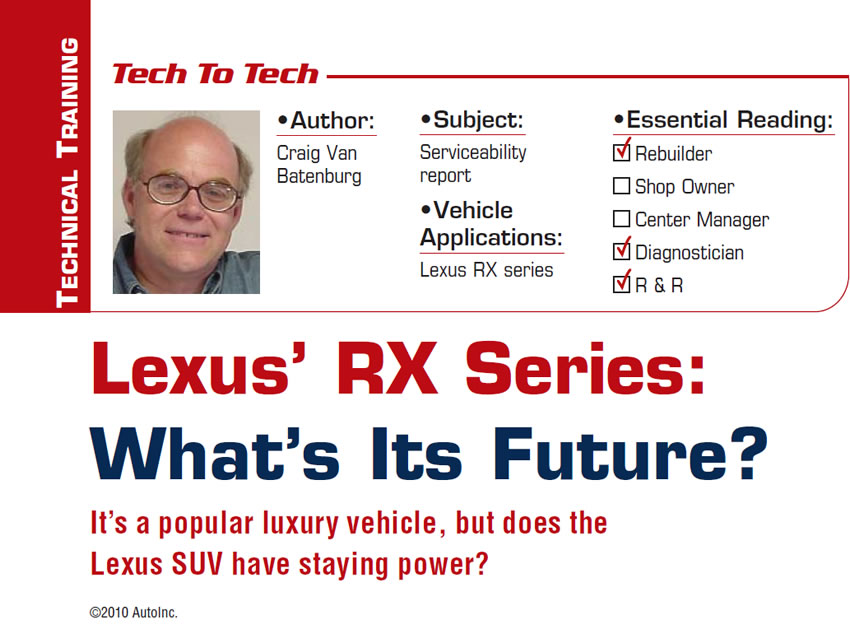 It’s a popular luxury vehicle, but does the Lexus SUV have staying power?

The Lexus brand has been around for two decades now. Toyota saw that Honda had a good thing going with Acura so Toyota jumped into the luxury market and moved into first place with European-type designs, good product and new ideas. This crossover segment, as it was first called, was a smaller SUV that used a car platform (uni-body) and a four-wheel-drive (4WD) system with higher ground clearance than a conventional car.

When crossovers appeared to have a following, Lexus introduced its first luxury SUV, the RX300. It soon became the best-selling Lexus model and still is. We have never focused our attention on Lexus before with a critical eye on service issues. Did the new-car designers, and others involved with the process of bringing more RX vehicles to market, bestow on us an easier car to repair or make matters worse as time went on?

Lexus introduced the first RX, the 300 series, in 1999, followed by the more-powerful RX 330 in model year (M/Y) 2004. The release of the RX 350 for the 2007 model year brought yet another performance upgrade to its top-selling, car-based SUV line. As time went on, many affluent consumers decided the luxury brand and the sportiness of an SUV offered them the status they desired with a name that had a great reputation for reliability. The RX has never gone out of style. But with global warming becoming more well known and fuel economy tied into the reasons for our heating planet, getting better miles per gallon is also required if a well-to-do person is to be taken seriously in his or her global awareness.

The RX400h (small “h” for hybrid) was the answer. Now you can drive green, have all the luxury you want and save the planet too! Instant winner.

I am lucky enough to travel to Europe every September to teach hybrid technology overseas. Did you know that in Europe – the land of diesels – one out of every two RX models is a hybrid? Yes, this is one popular Lexus. These mid-sized SUVs are everywhere, and you will surely work on them if you haven’t already.

With the RX 300, Lexus created its own “crossover” vehicle, which blends the attributes of a truck and a passenger car. Available with front-wheel drive or permanent all-wheel drive, the four-door SUV was based partly on a passenger-car platform. Exterior dimensions were similar to Jeep’s Grand Cherokee, with a 7.5-inch ground clearance. Absence of low-range gearing made this Lexus an all-weather on-road vehicle, not a true off-road 4×4. The powertrain was a 3.0-liter V-6 engine with variable valve timing, coupled to a four-speed automatic transmission. Towing capacity was 3,500 pounds. The RX300 got its front suspension from the Camry, its engine block from the ES300, its transmission from the Caldina (not sold here) and its rear suspension and optional full-time 4WD system from the Celica All-Trac sports coupe.

The base model was front drive. Once all the right components from various other Toyota models were in place, the RX300 went on sale. The public loved it. But did technicians? I asked that question to Ray, a Lexus dealer technician I met in Jacksonville, Fla. His answer: “The RX300 is great to work on compared to some other Lexus models I have fixed.” Older Lexus models are still well maintained and have minor service issues, just like any other car.

The first year of production is always the most problematic, but the first RX series went pretty well in terms of recalls – just two that mattered. The electronic control unit (ECU) was replaced and two brake lines were also replaced on M/Y 1999. Other than that, as the cars age you will get lean codes usually related to the mass air flow (MAF) and codes for EVAP leaks. These are well documented on various Web sites.

The RX330 was introduced in M/Y 2004. It was more powerful than the best-selling model it replaced, and the RX330 was more popular than the first generation. The new RX 330 handled gravel roads just fine and could tow up to 3,500 pounds with the optional trailer package. If you ordered the technology package this is what you received: Headlamps swiveled to help the driver see around corners, a rear-mounted camera displayed more of what’s behind the car on the dash, a voice-activated hands-free telephone system is linked wirelessly to your Bluetooth-compatible cell phone, a cruise-control system was adjustable for certain changes in traffic, a giant sunroof and seven air bags. The internal-combustion engine (ICE) was a 3.3-liter V-6 with a five-speed automatic gearbox. But it was not without its faults. Early models had five recalls concerning brake lights, catalytic converters, brake booster, seat belts and carpet clips. The redesign did not go as well as Lexus had hoped, but after the new parts were installed all was well again at Lexus, at least for a while.

The only significant external difference between the RX 350 and the outgoing RX 330 (the car it replaced) was the addition of a grille below the front bumper. The 3.5-liter V-6 RX 350 was more powerful than the Lexus RX 330, generating 270 horsepower, which is enough to propel the 4,090-pound RX 350 from standing to 60 mph in 7.3 seconds. Engine technology was also upgraded in the RX 350, which used dual variable valve timing to optimize performance and reduce emissions. With the performance package, the RX 350’s five-speed automatic gearbox included a sequential transmission. Things progressed as newer technology became available, and the price went up a few grand as well. As far as recalls went, things got better, with only two problems: an A/C-harness issue and a leaking oil hose. Both are easy to get to and replace.

In 2010 Lexus broke with tradition and redesigned the body, chassis and suspension and made major changes but did not change the model designation, so the RX350 name was carried over to an all-new RX. This may make ordering parts a bit confusing for some. Changes for 2010 include a sleeker exterior, more-spacious interior, a new six-speed transmission and double-wishbone rear suspension, and five more horsepower for the V-6 engine.

Most of you know I love hybrids, so I will try to be objective. The hybrid version came out in M/Y 2006, and the RX400h has been steadily making its way on the sales charts. In 2010, the RX went through its first redesign and came out just fine. It is called the RX450h, and some noteworthy changes were made. The ICE has late intake-valve closing (sometimes called “Atkinson cycle”), the 12-volt battery is in the rear and is not an AGM type, and the water-cooled continuously variable transmission (CVT) is now oil cooled. You have an electric-vehicle (EV) button to use, and the miles per gallon is better – more in line with the Ford Escape hybrid. Recalls have been minimal; early 400h had new steering racks, and all RX hybrids received new carpet clips. The hybrids are equal to or better than all the other RX models in terms of service.

The RX series has stayed the same for the most part over the 10-plus years it has been in America. Some are made in Canada, so more American suppliers of parts get some of the business. The technicians I spoke with don’t have bad things to say, and the owners love them. With the TechStream lite factory scan tool (under $1,500), some training and good tech support, this is a vehicle you can service. Hybrid owners will be looking for your hybrid credentials.

Craig Van Batenburg, AAM, is the owner of the Automotive Career Development Center (ACDC), www.autocareers.org, and delivers management and technical seminars nationwide. He formerly owned Van Batenburg’s Garage Inc. in Worcester, Mass., for more than 25 years. Van Batenburg is ASE master and L1 certified, with advanced skills in hybrid drive systems. You can reach him by e-mail at [email protected]

This copyrighted article is reprinted with the permission of AutoInc., the official publication of the Automotive Service Association (ASA). To learn more about ASA and its commitment to independent automotive service and repair professionals, visit www.ASAshop.org or call 800-272-7467.