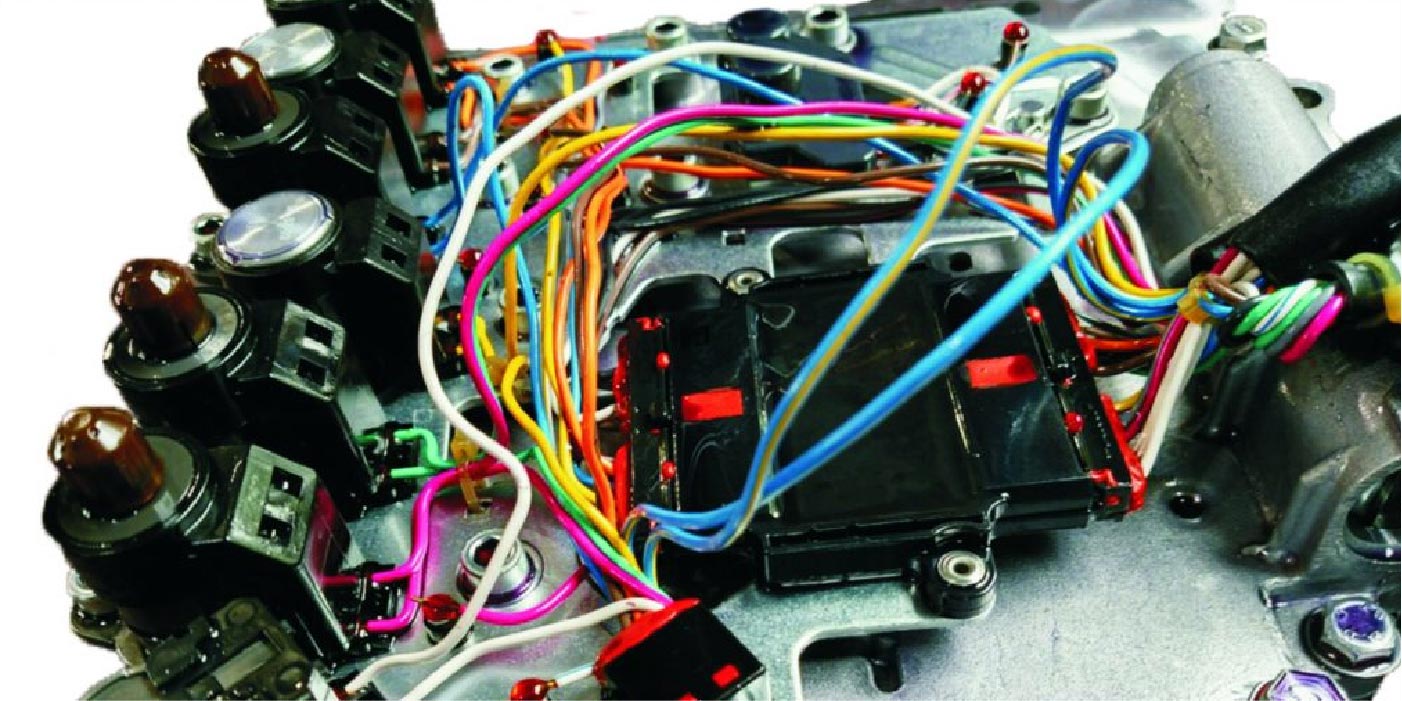 A call came in to ATSG’s technical help line concerning a 2009 Kia Borrego with a 3.8L engine using a 5-speed RWD transmission called the A5SR2.  This transmission is very similar to the Subaru 5AT transmission; a derivative of Nissan’s RE5R05A transmission. Mounted on top of the valve body are the solenoids, a sub-ROM and pressure switch frame assembly (Figure 1).

This A5SR2 came into the shop in 4th gear failsafe. The codes pulled were P0732, P0733 and P0734 gear ratio codes along with a P0763 Direct Clutch (D/C) solenoid performance code. With the direct clutch being applied for 2nd, 3rd and 4th gear, the D/C solenoid performance code was set as a companion code to the gear ratio codes set for those gear ranges. Kia’s description of P0763 is as follows: P0763 is not only caused by electrical malfunction (circuits open or shorted) but also by a mechanical malfunction such as control valve sticking or improper solenoid valve operation.

Since P0763 could be an electrical problem as well as a mechanical problem, it was decided to make an electrical check of the solenoid first before taking out the valve body. A wiring diagram was pulled which revealed that by placing an ohm meter between terminal 4 and chassis ground would provide the resistance of the D/C solenoid (Figure 2). The specification for this solenoid is three to nine ohms. When the check was made, it appeared to have an open circuit. In fact, when other solenoids where checked they too showed open. Thinking there is an internal harness problem, the valve body assembly was removed to inspect the wiring harness.

It was discovered that the cause for the open solenoid circuits had nothing to do with the codes being set placing the transmission into failsafe. Upon checking the wiring circuit it revealed an added component not mentioned in any tech material from Kia. The solenoid ground wires which are usually fastened to the valve body are now entering a 3/4″x3/4″x3/8″ black block mounted on the valve body (figures 3 and 4). Exiting the block are two other wires which passed through terminals 5 and 10 of the case connector. These two wires find themselves at terminals 29 and 73 at the TCM. To add to the confusion, when looking at wiring diagrams it says and shows that these two wires are “Solenoid Supply” wires going to two unknown solenoids inside the transmission. This did not accurately reflect what was actually inside this particular transmission. These two wires are actually ground wires for the solenoids from the TCM not power wires. The black block serves as a splice pack.

The cause for the codes to set were lightly tightened valve body bolts. The owner of the vehicle said the transmission was never worked on prior to this occasion. This suggests that the valve body was not properly tightened from the factory and eventually became a problem.

After all valve body bolts were tightened to 8 N·m (70 in.lb.), including the valve body to case bolts, the vehicle was road tested and the problem was resolved.

NOTE: It has been confirmed that 2008 to 2009 Kia Sorento using a 3.8L engine also has this splice pack and incorrect OE wiring. It may be earlier as well but have not been able to confirm.

Advertisement
In this article:A5SR2, Kia, Solenoid