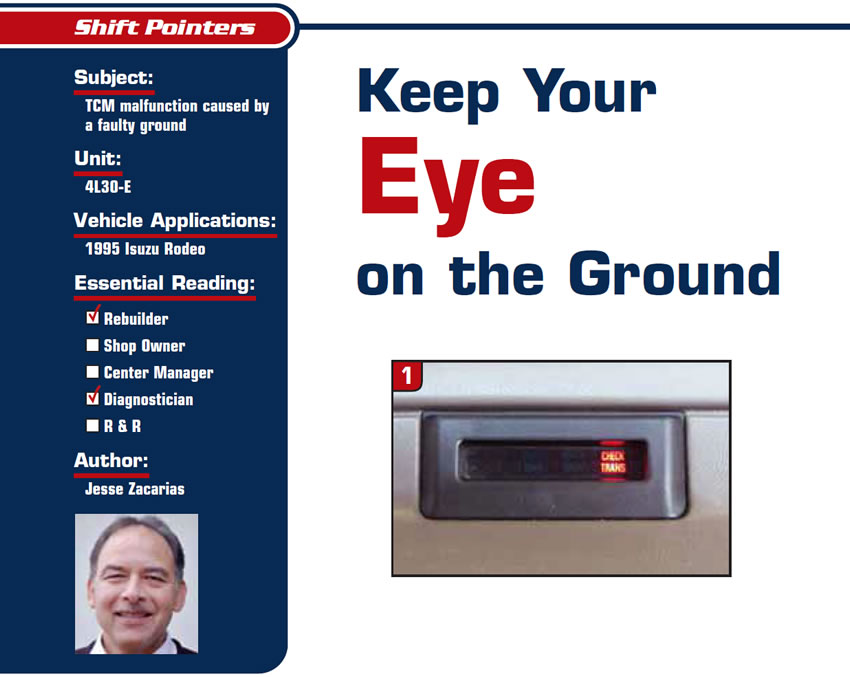 How many times did we hear those words when we stumbled? Sometimes this can also be good advice when you’re working on electronic control devices like the TCM.

How many times did we hear those words when we stumbled? Sometimes this can also be good advice when you’re working on electronic control devices like the TCM.

The following example brings this point to mind. A customer brought in her 1995 Isuzu Rodeo with a 4L30-E transmission with a unique concern. According to her, the vehicle would be sluggish at times and the transmission would not shift, especially if she did not put her sun protector on her front windshield on a hot day. She mentioned that when driving for a while, if she stopped and turned off the engine for a short time, she would experience the same problem, but if she left it parked for a while in the shade, the vehicle would perform fine. She had taken it to her mechanic but he could not find anything wrong.

She left it with us in the afternoon, and first thing in the morning we road-tested the vehicle and it performed fine. We parked it inside the shop and after a while we road-tested it again; same thing: no problem. This time the shop was full so we parked it outside in the sun with the windows closed. A couple of hours later, when we tried to road-test it, we felt the problem. The vehicle could barely get out of its own way. We also noticed that the check transmission light was on (see Figure 1).

Now we knew we were dealing with a temperature-related problem, because it was about 105° outside when we left the vehicle parked and it was cool inside the shop, where the vehicle cooled off for about an hour. We were able to duplicate the problem every time by using a heat gun to warm the TCM, just warm to the touch.

We decided to check for the first things first: input voltage and grounds at the TCM.

When checking for input voltage at connector B39 pins A4, A8 and A7 we had the same battery-voltage reading, with and without the “check trans” light on.

However, when checking for proper ground at the TCM, at connector B40 pins D1, D16 and C1, we noticed a difference. When we had the “check trans” light on, the voltage drop was -0.003, (see Figure 2) but when the light was not on we had 0.041, which is a sign of a good ground and that the TCM is drawing current (see Figure 3).

This shows the importance of checking for a good ground while the devices that it grounds are energized and drawing current.

On initial startup when key is turned on, the TCM does a quick check for voltage and ground by energizing all the main devices connected to it. If any one of them fails, it then gives you the proper codes.

In this particular case it seems that when the TCM did the check while it was hot, whether it was caused by the weather outside or by the warming of normal usage, it failed to turn on and therefore did not draw any current. The 3 mV that it was drawing showed this. We also could see the failure of the TCM to turn on by observing the information panel at the dash. If all the lights came on, then turned off (which showed the TCM checking for proper voltage and ground at each light of the information center), we had proper voltage drop, a sign that it was on and with no codes (see Figure 4). On the other hand, if only the “check trans” light was illuminated and never turned off, the TCM had failed to turn on and the lack of current draw revealed this.

The lack of power that the customer was complaining about was caused by the transmission being in fourth gear because the TCM failed to turn on. We replaced the TCM, and problem solved.

Remember: Keep your eye on the ground.

Jesse Zacarias is the owner of Elec-Tran Diagnostics in Gilroy, Calif.

Keep Your Eye on the Ground