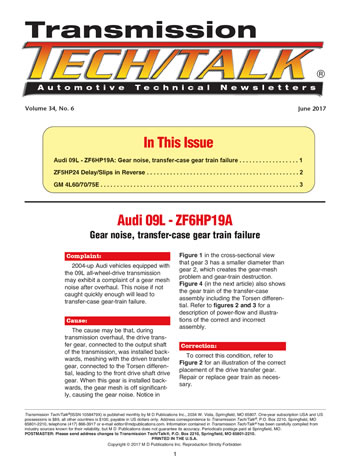 2004-up Audi vehicles equipped with the 09L all-wheel-drive transmission may exhibit a complaint of a gear mesh noise after overhaul. This noise if not caught quickly enough will lead to transfer-case gear-train failure.

The cause may be that, during transmission overhaul, the drive transfer gear, connected to the output shaft of the transmission, was installed backwards, meshing with the driven transfer gear, connected to the Torsen differential, leading to the front drive shaft drive gear. When this gear is installed backwards, the gear mesh is off significantly, causing the gear noise. Notice in Figure 1 in the cross-sectional view that gear 3 has a smaller diameter than gear 2, which creates the gear-mesh problem and gear-train destruction.

Figure 4 (also in the next article) also shows the gear train of the transfer-case assembly including the Torsen differential.

Refer to figures 2 and 3 for a description of power-flow and illustrations of the correct and incorrect assembly.

To correct this condition, refer to Figure 2 for an illustration of the correct placement of the drive transfer gear. Repair or replace gear train as necessary.

After overhaul, vehicles equipped with the ZF5HP24 transmission may exhibit a delayed engagement in reverse, or when reverse is engaged it slips backing up.

Note: It may be noticed that when the selector is pushed a little closer to the park or drive position, reverse engages good.

The cause may be that the manual valve, as shown in Figure 4, is misaligned to the valve-body casting, causing a loss of pressure to the reverse apply circuit.

Vehicles equipped with the 4L60/70/75E transmission may exhibit a complaint of premature or repeated 3-4 clutch failure.

The cause may be a leak where the turbine shaft is pressed into the input housing as shown in Figure 6. Note: This problem may only show up when hot; take the input drum fully assembled, place it in a plastic bag and put in the parts washer then re-test.

To correct this condition, press the turbine shaft out of the input drum, from the opposite side shown, and apply Loctite around the shaft and press it back in. Let the drum set for a while and repeat the air test to make sure the leak is fixed. If the leak cannot be fixed, replace the drum.

Special note: GM part #17803687 has been known to have an issue with passages connected from incorrect drilling of the turbine shaft. Verify that the passages are not connected, as shown in Figure 7, before installing the drum back together.