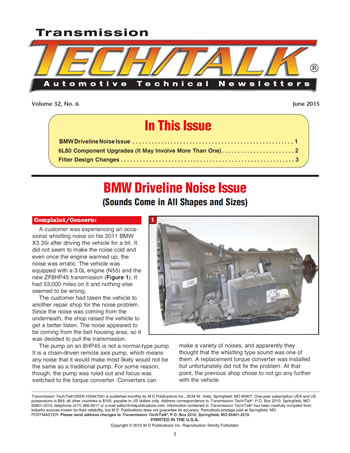 A customer was experiencing an occasional whistling noise on his 2011 BMW X3 35i after driving the vehicle for a bit. It did not seem to make the noise cold and even once the engine warmed up, the noise was erratic. The vehicle was equipped with a 3.0L engine (N55) and the new ZF8HP45 transmission (Figure 1). It had 53,000 miles on it and nothing else seemed to be wrong.

The pump on an 8HP45 is not a normal-type pump. It is a chain-driven remote axis pump, which means any noise that it would make most likely would not be the same as a traditional pump.

For some reason, though, the pump was ruled out and focus was switched to the torque converter. Converters can make a variety of noises, and apparently they thought that the whistling type sound was one of them. A replacement torque converter was installed but unfortunately did not fix the problem. At that point, the previous shop chose to not go any further with the vehicle.

The customer showed up with the vehicle to get a new perspective, a fresh set of eyes and, more important, ears. Knowing the vehicle history, the technician started to scope out all engine and transmission recalls and TSBʼs to see if BMW had issued anything related to this noise problem and sure enough, there was a TSB released in August of 2012. The bulletin stated that on a 3.0L N55 engine a noise can occur that could be a whistling, hooting or even a squealing sound and could affect several vehicles from 2009 to 2012.

Believe it or not, the problem can stem from either the front or rear crankshaft seals. A manufacturing flaw exists on certain applications, which requires the seal replacement.

Procedures are used to determine whether the noise is due to the crankshaft seals, front or rear.

To begin with, start the engine and allow it to run enough to warm up. While the engine is idling, wait for the noise to appear and, at that point, loosen the engine oil fill cap (Figure 2). Loosening the cap will allow crankshaft pressure to lessen and will cause the noise to change if it is due to the rear crankshaft seal.

To determine if the noise is coming from the front crankshaft seal, drive the vehicle and while itʼs going down the road, hit the brake pedal. At some point, the noise will appear and not stop. As with the rear seal, loosen the engine oil fill cap to lessen the crankshaft pressure and, if the noise changes, replace the front seal.

Removing the front crankshaft seal is a bit more involved, requiring a ton of special tools, if done as BMW recommends. After removing the vibration dampener, the front seal is visible as well as a hollow central bolt. Do not loosen the central bolt, or the timing chain and oil pump sprockets could rotate out of sync and bad things will happen (Figure 4).

Either use the special tools or get creative when pulling out the seal. The new seal will have two indentations on the O.D. that must align with the pan/block seam in order to apply RTV. Hopefully the noise does not come from the front on most vehicles.

A customer with a 2010 Silverado 2500 stated that his truck had started to develop a clicking-type noise once the vehicle reached approximately 55,000 miles. The noise only occurred when going into drive or reverse (garage shift). The truck had 63,000 miles on it and was equipped with a 6L80 transmission and 6.0L engine. Since it was a 4WD, a thorough inspection needed to be done to determine whether the noise came from the transmission or transfer case, not to mention the differentials or drive shafts.

Other than the noise, the transmission worked fairly well as far as shifting, lock up, throttle response, etc. After using a stethoscope to try to isolate the clicking sound, which wasnʼt always there, the noise was determined to be toward the rear of the transmission more than inside the transfer case. Before removing the transmission, the pan was dropped to look for damage. The fluid and pan were both in good shape, no broken chunks of iron.

Based upon external findings, the transfer case and transmission were pulled and the transmission was disassembled. Before removing the pump, end play was checked, as well as the output shaft/transfer input gear spline fit. Everything seemed to be normal. Each component was inspected as it came out, looking for anything that could cause the noise.

Since the noise appeared to be coming from the back of the unit, special attention was placed on the rear planet and output shaft. Planetary gear clearance was within spec and no wear was found. The output shaft assembly, however, was not as sound. There was a certain amount of looseness in the ring gears, which spline into the output shaft shell. The 6L80/6L90 transmission output was a multipiece assembly consisting of the output shaft/shell, front and rear ring gears, spacer and snap rings (Figure 5). If any part of this assembly becomes too loose, noise can occur when shifting from park or neutral into gear.

Beginning in 2012, GM made a change to the complete assembly that will certainly remedy any noise situation. The output shaft now has the ring gears integral with the shell, which cuts manufacturing and assembly cost at the plant. As with the first design, the park gear and RPM reluctor are also part of the assembly (Figure 6).

Second-design assemblies will retro back, but they are based upon application, therefore check with a dealer for the correct part numbers. Beyond the change in the output assembly from a multipiece design to a one-piece Unigear design is another component, which must go hand in hand with the output. It is the output speed sensor (OSS).

Unlike earlier model transmissions that have the OSS on the outside of the case, the OSS for the 6L80/6L90 is internal and is attached to a harness that also includes the input speed sensor (ISS) (Figure 7).

When the output-shaft assembly changed in 2012, the reluctor (sensor ring) diameter changed slightly, affecting the OSS spacing (air gap). If the wrong combination of output and OSS are used, different conditions will occur. The mounting surface of the OSS was modified slightly to accommodate the change. The first design sensor was basically flat, whereas the second design OSS has a step in it (Figure 8).

Using a second design, OSS with the multipiece output will result in damage to the sensor, whereas, if a first design OSS is used with a Unigear output, the air gap will be wrong and a trouble code will be set. With the correct combination, either scenario will fly; however, it is advisable to go with the second design setup and avoid potential issues.

Automatic transmissions have required filters in one form or another from day one. Over decades, filters have evolved from basic “rock collectors” to a variety of specially engineered media and housing materials. Certain applications even have the filter integral with the pan, such as ZF.

Design changes occur for various reasons, such as a change in fluids and fluid viscosity, pan depth and design and the increase of electrical components, as well as manufacturing and cost issues.

Metal filters with wire mesh had given way to metal/plastic or all plastic housings (halves) with a nylon, Dacron or paper media. Even the density of the media has been changed over the years to accommodate newer applications. Filtran, for instance, years ago developed “serial” (depth) filtration to provide improved filtering across a smaller overall area. Even filter seal designs have changed substantially. Previous design gaskets and O-rings have been replaced by top-hat or ribbed-type seals with improved materials to prevent shrinkage or hardening.

Filtration has elevated to such a level that certain vehicles, such as Ford trucks with the 5R110W, implemented a filter bypass system, initially part of the cooler-line circuit. In effect, a small percentage of fluid was diverted to an extreme filtration cartridge (toilet paper roll) to filter out all particles that the sump filter could not. It took many miles of driving to completely filter all of the fluid, but the transmission ended up clean.

One transmission family that has had some manufacturing changes in filters is the Ford 6F35. The 6F35 and its cousin, the GM 6T40, has a unique filter-neck design, in that it locks into the pump housing by rotation (Figure 9). The GM version is completely different from Ford and as yet hasnʼt changed, although other aspects of the 6T40 started to change big time beginning in 2012.

The 6F35 filter, however, did change beginning in 2012 related to overall construction. The filter is now all plastic and in two-tone, (Figure 10). Although there is a noticeable difference between the first and second designs the new filter will retro back to 2009. The original part number of the first design filter was 9L8Z-7A098A, which was later changed to a “B” and then to a “C” suffix. The second design and current part number is 9L8Z-7A098D.

If that change wasnʼt enough, another filter surfaced in 2013, which is close to the second design. Parts of the second and third designs are common with only the bottom half being different (figures 11a, 11b). The slight difference with the intake of both styles calls into question, whatʼs the point? The third design part number is BB5Z-7A098B.

Another transmission family that has seen filter changes is the Ford 6R60/6R80. The ZF predecessor to the 6R60, the 6HP26, uses a plastic pan with integral filter for most models, whereas Ford went traditional.

By late 2006 another design was released to accommodate a deeper pan and higher capacity. The body construction was increased and the intake is approximately 1 inch long (Figure 13). The part number is 7L1Z-7A098A.

Engineers tend to get bored, so in 2011 a third design hit the streets but was only slightly different than the second design, with the length of the inlet neck being approximately ¼ inches (figures 14a, 14b). The third design filter will work on all cars like the Mustang and the part number is BL3Z-7A098A.

In 2014, Ford decided to provide a 6R80 with start-stop capabilities. The NANO Hybrid requires a different design due to the start-stop inlet. The inlet has a spring-loaded check valve and the filter neck has an O-ring (Figure 15). The part number is FL3Z-7A098A.

Lastly, the 2014 Ford Transit V363 also got a new filter, part number CK4Z-7A098A, with the main difference being the bottom inlet tube change due to a manufacturing issue. How many more can there be? The hits just keep on coming.