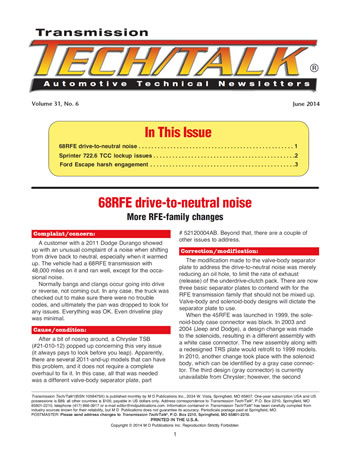 A customer with a 2011 Dodge Durango showed up with an unusual complaint of a noise when shifting from drive back to neutral, especially when it warmed up. The vehicle had a 68RFE transmission with 48,000 miles on it and ran well, except for the occasional noise.

Normally bangs and clangs occur going into drive or reverse, not coming out. In any case, the truck was checked out to make sure there were no trouble codes, and ultimately the pan was dropped to look for any issues. Everything was OK. Even driveline play was minimal.

After a bit of nosing around, a Chrysler TSB (#21-010-12) popped up concerning this very issue (it always pays to look before you leap). Apparently, there are several 2011-and-up models that can have this problem, and it does not require a complete overhaul to fix it. In this case, all that was needed was a different valve-body separator plate, part # 52120004AB. Beyond that, there are a couple of other issues to address.

The modification made to the valve-body separator plate to address the drive-to-neutral noise was merely reducing an oil hole, to limit the rate of exhaust (release) of the underdrive-clutch pack. There are now three basic separator plates to contend with for the RFE transmission family that should not be mixed up. Valve-body and solenoid-body designs will dictate the separator plate to use.

When the 45RFE was launched in 1999, the solenoid-body case connector was black. In 2003 and 2004 (Jeep and Dodge), a design change was made to the solenoids, resulting in a different assembly with a white case connector. The new assembly along with a redesigned TRS plate would retrofit to 1999 models. In 2010, another change took place with the solenoid body, which can be identified by a gray case connector. The third design (gray connector) is currently unavailable from Chrysler; however, the second design (white connector) will supersede to work on later
models.

Valve-body design is key in determining all components to use in a given transmission. Although the overall castings appear to be the same, the main thing to look for is checkball quantity. Models that originally had the black or white solenoid-body connectors used seven checkballs (Figure 1). When the gray-connector design was released, checkball quantity dropped to five. The check-ball pockets are still in the casting, though, so make sure that you use the proper number of checkballs, based upon overall design. Late-model oil schematics should reflect that checkballs #6 and #7 are gone.

When the gray-connector solenoid design was released and the valve-body checkball count changed to five, the second-design separator plate was used. The part number for the second-design plate is 52120004A (Figure 3). Note that the number 6 and 7 checkball holes are reduced to one hole. Do not use check-balls 6 and 7 with the plate of this design.

The separator plate that was released to address the drive-to-neutral noise issue should be considered a third-design plate. The modification made was to reduce the underdrive-clutch exhaust hole to slow its release. You can see the difference by comparing the exhaust holes in figures 2 and 3. The part number is 5212004AB. Last, the other item responsible for this chain of events is the solenoid body. When the first change was made in 2003, it was due to a solenoid design issue. The case-connector plastic denotes the design (Figure 4).

The solenoid-body change, which occurred in 2010, was for a completely different reason. Chrysler determined that the overdrive solenoid was no longer needed. By omitting the solenoid, the other hydraulic changes were implemented. The gray-connector solenoid body now contains six solenoids instead of the previous seven (Figure 5). The multi-select solenoid is what controls the overdrive clutch. This is why the gray-connector solenoid body does not retrofit.

When replacing parts always ensure that the proper mix is used.

A customer with a 2003 Dodge Sprinter 2500 arrived with a drivability complaint that was somewhat inconsistent. The vehicle had 133,000 miles and was equipped with a Mercedes 722.6 transmission. He said that at times when coasting to a stop, the van would shake and make an odd noise. During the road check, the shaking was found to be a converter shudder (chatter) that would normally be noticeable on acceleration. The warmer it got, the worse it got. The condition had been getting more noticeable over the past several months.

Once a 722.6 has a fair number of miles on it, different conditions can surface, especially relating to the torque converter. Converter lockup (shudder, chatter, judder, bucking etc.) can be caused by several different components, but in this case the TCC-regulator-valve system seemed to be the focus. Since itʼs easier to deal with a valve body in the vehicle than the transmission and torque converter out of the vehicle, it was worth giving it a try. The valve-body fix worked out well.

Like all automatics with a lockup torque converter, the Mercedes 722.6 has had its share of problem areas relating to lockup apply and release. The converter itself is not the norm. Unlike a regular GM converter with one big lockup piston, the 722.6 converter uses a captive clutch, similar to a regular clutch pack. That means lockup apply functions a bit differently. In addition, as the miles start to pile up, apply/release characteristics do change.

Lockup is controlled by all the normal stuff (TCM, sensors, solenoids, valves, correct electrical signals and proper hydraulic pressures) and if anything gets out of whack, bad news. The valve body has two main sections, upper and lower, with a slew of valves (Figure 6). Of the six solenoids, one is for lockup and is a PWM design. Computer strategy determines lockup timing and firmness via the TCC solenoid and valves.

Currently, Sonnax, Superior and TransGo all have various fixes for 722.6 valve-body issues. The two valves that directly impact the lockup converter are the TCC lockup regulator valve and lubricating-pressure regulator valve (TCC limit). These valves, among others, are prone to wear and in some cases need to be replaced with oversize valves. Refer to literature from the three companies listed to see what is available.

The modifications used to fix the Sprinter were perfected by Andy Bittenbinder (“Doktor A”) and involve removing one valve-body end plate, which can be done in the vehicle. The two valves affecting the converter have different roles. The TCC regulator valve is controlled by the lockup solenoid and, depending on position, will allow lockup to occur as well as controlling how fluid enters the converter and cooler circuits. This is the “in-vehicle” fix. The lubricating-pressure regulator valve determines internal converter pressure and ultimately cooler pressure (Figure 7). The valve body must be removed to gain access to this valve. Note the area in the schematic that was addressed by the orifice modification.

The Sprinter coast-down shudder problem, which could be described as similar to going over asphalt rumble strips, was eliminated by drilling a small hole in the valve-body end plate. The hole must be drilled in the correct position, which is at the end of the TCC regulator valve, to exhaust a small amount of lockup-solenoid pressure (Figure 8). The recommended hole size would be a #55 drill bit; however, if the TCC regulator valve has excessive wear, the fix may not be effective.

Also shown in Figure 8 is the lubricating-pressure regulator valve, which is controlled by line pressure and spring tension and tends to wear as well. This valve is in the upper valve body, which must be removed to gain access. Internal converter pressure will exceed the norm, based upon how much wear the valve has, and at some point can start to partially apply the lockup clutch incorrectly. Engine stall can actually occur with excessive wear of the valve. Repairing these and other valves requires complete valve-body disassembly in order to ream worn bores.

To drill the TCC-regulator-valve orifice hole in the correct position, remove the end plate and look at the inside surface to see the witness mark of the valve (Figure 9). Drill the hole in the center of the mark and reinstall. Use caution not to drop any of the other valve springs.

As with all other repairs of this nature, the tech is great, but a little luck also goes a long way.

While a customer was driving his 2009 Ford Escape, he noticed that the transmission suddenly started to jerk while shifting. The vehicle had worked well up until that point. The Escape was equipped with a 6F35 and had 57,000 miles on it. The fluid was in good condition and there were no trouble codes. Although upshift and downshift harshness was inconsistent, the neutral-to-drive apply hit hard each time the shifter was moved. Computer controls all seemed to function correctly and hydraulic pressure was within spec.

After all the potential minor items were ruled out (sensors, solenoids, valve body etc.) the transmission was removed and disassembled. The component that was the cause of the problem was the center support. The 1-2-3-4 piston return snap ring had popped out of the groove. There was no evidence of groove wear to explain why it did.

The 6F35 Belleville springs do have a raised bump on the spline fingers; however, it may not be quite enough. It is possible that fatigue of the snap rings or wear of the grooves may be responsible for this occurring, after a certain number of miles.

The main improvement to the replacement center support has to do with an additional component. A cupped support ring is now placed between the snap ring and Belleville return spring on both sides of the center support (Figure 13). It appears that the lip of the cupped ring makes this fix bulletproof. Time will tell. The previous raised bumps on the return springs have even been omitted.

The new part is a simple drop-in and itʼs pretty cheap (inexpensive). There are some dimensional differences, though, to prevent individual-component interchangeability. Itʼs a shame this improvement wasnʼt made for other applications. The only question now is, will GM follow suit on the 6T40?